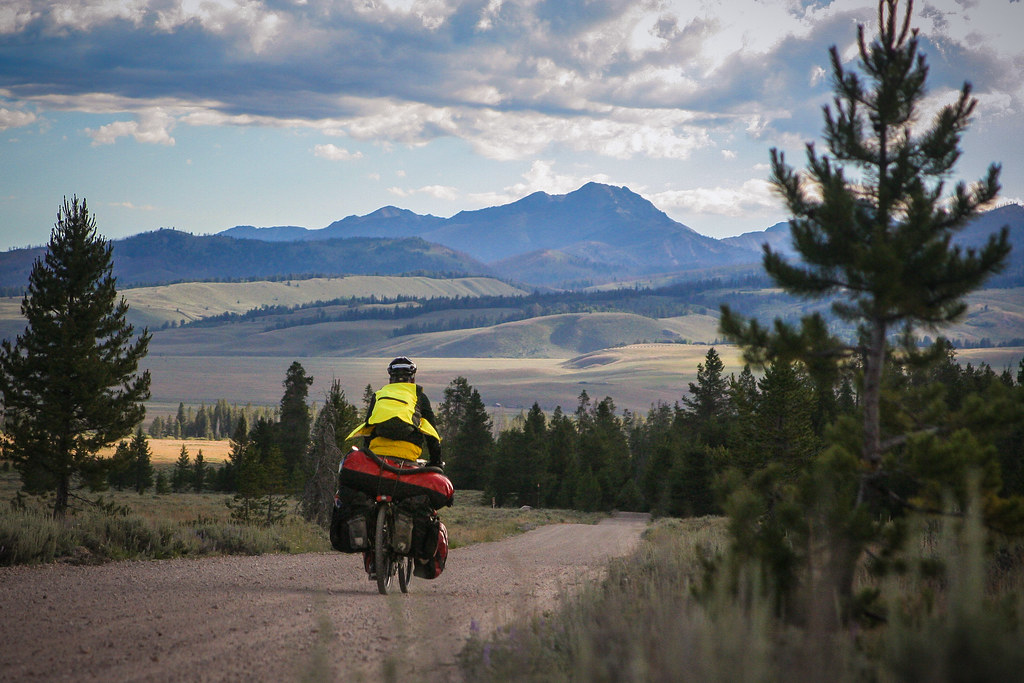 In 2014, Adventure Cycling unveiled what promised to be one of America’s most beautiful and challenging bicycles touring routes: the Idaho Hot Springs Mountain Biking Route.

The Idaho Hot Springs Mountain Bike Route guides riders over and through the breathtaking landscape of central Idaho. From blue ribbon trout streams to sub-alpine terrain and cozy mountain towns, riders will pass through some of the most spectacular country the West has to offer, with the opportunity to indulge in the highest concentration of soakable hot springs in North America.

In late May, we biked over from Missoula with plans to tackle the route.

What we didn’t realize was that stubborn snow still covered the high, remote passes.  Our hopes were dashed early in the season but we returned in July after having bike around Eastern Oregon (no regrets—Steens Mountain is stunning).

My only regret is that when we returned for a second shot at the Idaho Hot Springs Route, logistical complications and time constraints meant we were only able to knock off the section from Boise counterclockwise to McCall.  The whole ride has a high ‘wow’ factor and we didn’t want to miss a single inch.

The route is described as remote, with limited services.  Most people purchase the Adventure Cycling maps, but with a limited budget, we decided to attempt the Hot Springs Route by following the Idaho Hot Springs GPS tracks files easily downloaded on the extraordinarily useful Ride with GPS website.

This was our first time relying solely on the Smartphone for navigation and I was apprehensive.  Perhaps we’d get hopelessly lost on some isolated forest service road and never find our way back to civilization.  My concerns, it turns out, were completely unwarranted.  Following the thin red line on my maps.me app worked a charm.

If you ask me, following the smartphone GPS is actually easier (and definitely more accurate) than paper maps.  But I still like my paper maps.  They’re fun to gaze at and dream big.

The one thing missing was a daily route profile.  Would have come in handy on day 2 out of Boise when we tackled what can only be described as a torturous trail up an unforgiving mountain.  This was the notorious Phifer Creek ‘Road.’ Thoroughly exhausted, we were mostly bike-pushing by the top of the pass.  The downhill was bliss and we set up camp outside the tiny settlement of Rocky Bar.  It was then that I realized the essential Bear Spray had gone missing. It must have bounced out of my pannier pocket on the rough road. I’ve got a healthy respect for wild animals.  Grizzlies haven’t been spotted in the area traversed by the Idaho Hot Springs loop, but you never know.  Better safe than sorry as mom always said.

Without the reassurance of the bear spray by my side, it was a fitful night’s sleep.

Did you hear that?  I think it’s a bear

It’s nothing.  Go back to sleep, probably just some squirrels.

The stick?  To fight a bear with? Go back to sleep.

No hungry bears visited our camp that night and the following morning we cruised into Featherville and headed straight to friendly Cindie’s Café for some intel.  A section of road past Baumgartner Hot Springs had been washed out.  The road over Dollarhide Pass (the highest point on the Idaho Hot Springs Mountain Bike Route) was closed to cars but the café owner thought we’d be able to pass on our bikes.

Another couple had come over the previous week so it was definitely do-able.  We rode out to where the road had tumbled into the river to check out the damage.  It didn’t look good.  A precarious-looking diversion was marked but, with our overloaded machines, we hesitated.  We’d have to schlep our bikes and gear over rough terrain for about a kilometer.  Maybe more.

I thought about the remote Dollar Hide Pass.  We’d be the only ones out there.  The route was closed to cars.  If we had the bad luck to stumble upon a grumpy bear, we’d have nothing to defend ourselves with except some flimsy sticks we were using as replacement kickstands.

We turned back.  I let my fear get the best of me.

After a refreshing soak in Baumgartner Hot Springs, we pitched up in the dispersed camping area.  Dispersed camping means free camping which is actually the same thing as a paid campsite minus the picnic table and with fewer neighbors, no generators and a better view.  Idaho is awash with gorgeous spots to pitch your tent and that’s one of the great joys of biking the Western US.

With Dollarhide pass off the slate, we headed toward Ketchum on the main highway.  Our diversion on pavement took us past the lovely Anderson Lake Reservoir and tiny Hill City.  Scattered across rural America are many almost ghost towns.  Places that once thrived and are now home to a few ramshackle buildings and boarded up storefronts.

Much of the land in southern Idaho is parched semi-desert covered in silver-green sagebrush.  This surprised me as I’d always imagined Idaho to be similar to Western Montana with its pine-clad mountains.  The vast empty spaces and big blue skies seemed to stretch on forever. 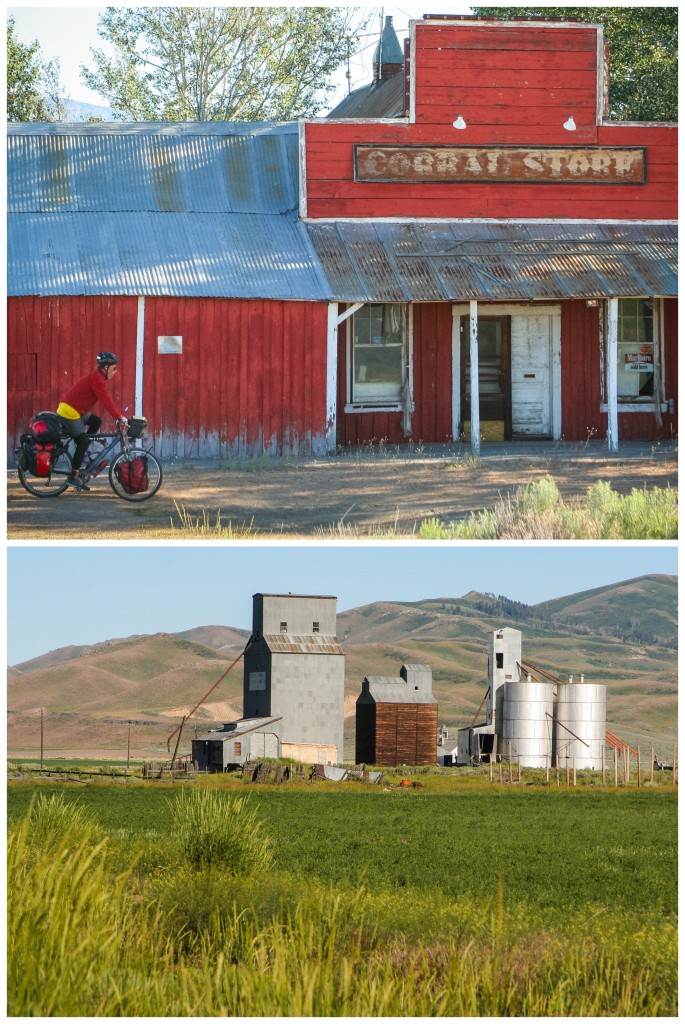 Affluent Ketchum–home to Sun Valley, one of America’s poshest ski resorts, is filled with buff retirees speeding around on titanium racing bikes.  With our battered bicycles and scruffy appearance, many who saw us rolling along the cycle paths probably assumed we were homeless folks (which of course we are, technically).  Our Ketchum Warm Showers host was off biking with his family in Japan and had generously opened up his home in spite of his absence.  We hung out with the family cat for a few days and explored the area.

Leaving Ketchum, we hopped on the Harriman Trail.  With the majestic Boulder Mountain Range as a backdrop, we wound our way through the Sawtooth National Recreation Area and up and over Galena Pass (8,701 ft/ 2,652 meters).  Even with the gentle grade, I was feeling the climb by the time we hit the top.  In the US, very few cyclists are heavily loaded.  Even those traveling cross-country seem to manage with a fairly light load.  Not a day passes without somebody pointing on that we’re really loaded (Wow!  You guys got a lot of stuff!).  The trend these days is to go light.  Clearly there are multiple advantages of leaving the 16-inch laptop, 15 kilos of food and full range of bike tools at home.  But somehow we struggle to wean ourselves off all our stuff.

Late in the afternoon, most cyclists’ thoughts turn to finding a safe place to sleep.  In the Western US, this is generally pretty simple.  If you’re on a budget, the best option is to pitch your tent on public Bureau of Land Management areas.

In small towns, you can also try the city park or local church.  Private landowners are another option.  Even though menacing ‘No Trespassing, violators will be prosecuted’ signs mar our countryside, many hospitable farmers and ranchers will readily offer space to pitch the tent (or perhaps even accommodate you in the spare room).

Our plan that day was to pull off onto a side road and pitch our tent creek side.  Then Todd and Nancie entered our lives.

“You guys got a place to sleep tonight?”

“Not exactly,” I explained.

“I’m Todd.  This is my wife, Nancie. You’re welcome to spend the night at our place.  We’ve got a cabin a couple miles up the road.  Hot shower, too.”

The shower cinched it for me.

One night became two.  It was 4th of July weekend and we tagged along to a potluck barbeque, outdoor concert and an afternoon of canoeing on a pretty little lake.

Life was good and we were deeply grateful. In our experience, Americans are some of the most generous people in the world.  Trust is easily granted and new friends quickly made.

The mighty Sawtooths are one of the most epic mountain ranges in America (world-class, really).  We pushed the pedals past granite outcroppings and craggy peaks, through broad meadows and lush lodge-pole pine forests.  The Sawtooths are nothing short of awe-inspiring.  A place where you feel humbled by the purity and power of nature.

The Sawtooths are also a place prone to forest fires.  On our way towards Warm Lake, we spotted thick black smoke in the distance.  We flagged down a car and the driver confirmed what we suspected: the forest was burning.

Cautious by nature, I wasn’t certain we should continue.  The roads we were riding were remote Forest Service tracks with little traffic.  If the fire spread, I reasoned, we might become trapped.  The driver reckoned we’d be alright, so we pedaled on and set up camp.

As we perched on a picnic table gobbling our evening meal of spaghetti with a bland industrial tomato sauce from the Dollar Store, a forest ranger sped into our camp.  My first thought was that we’d perturbed him by bending the rules and camping at a rest area.  Thankfully, his visit was friendly.  He just wanted to update us on the fire’s status and let us know the road ahead might be closed.

His advice was to set off early the following day before the fire ‘woke up’ after ‘bedding down’ for the night.   I’d never thought of a fire ‘going to sleep’, but it made sense.  Temps were down close to freezing at night and the fire obviously wouldn’t be burning too hot with moisture in the air.

We got around the danger area early the following day and I breathed a sigh of relief.  My sense of adventure has its limits.

The ride onto Warm Lake and then into McCall was just as gorgeous as the previous days.  As we crested the final pass at Lick Creek Summit I felt a surge of satisfaction and pride.  We’d done it.  Ridden our hefty rigs over a rough route designed for mountain bikes.  The ride may have been punishing at times, but at that moment all I felt was a ripple of pleasure. 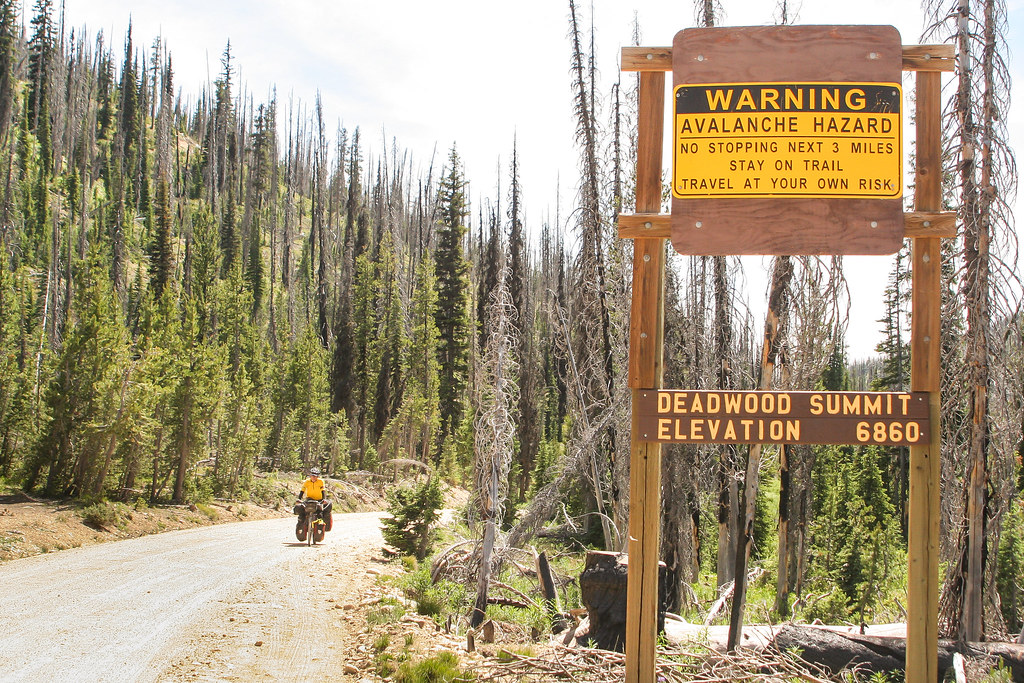 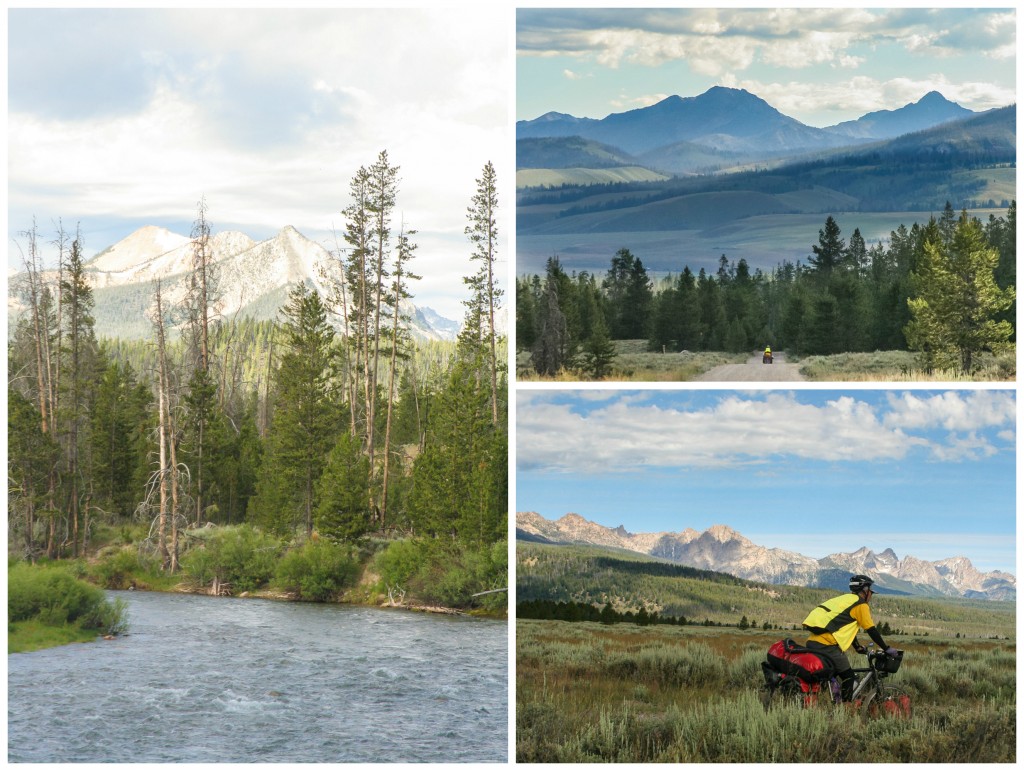 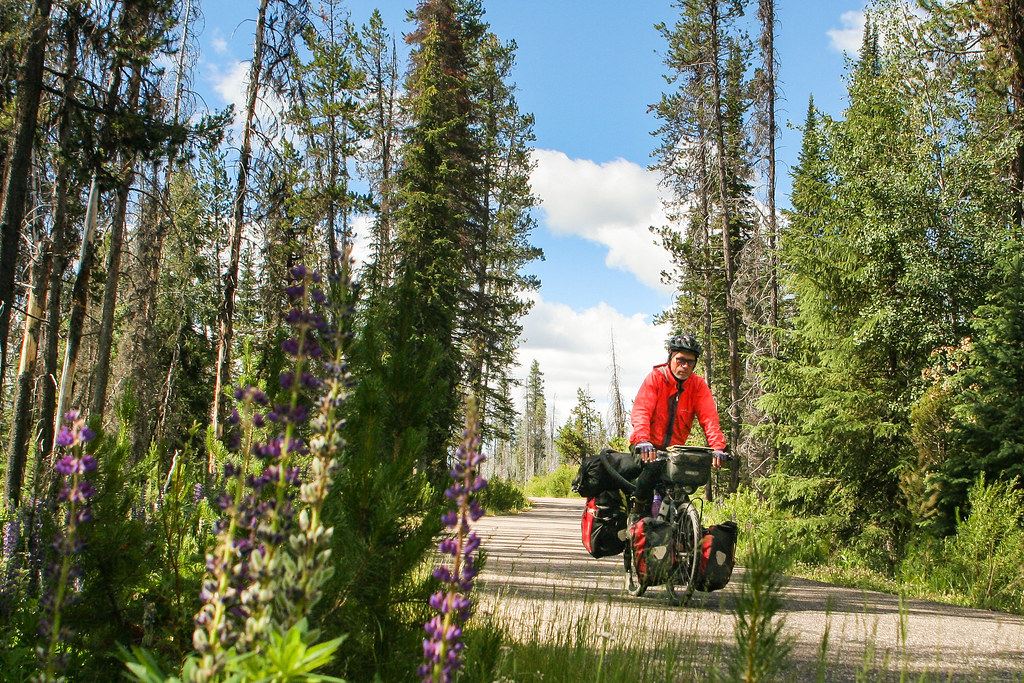 “The most stunning, unique route in Oregon.” Who’d want to miss that?  Not us.  Bikepacking Oregon’s enthusiastic praise had us sold:...