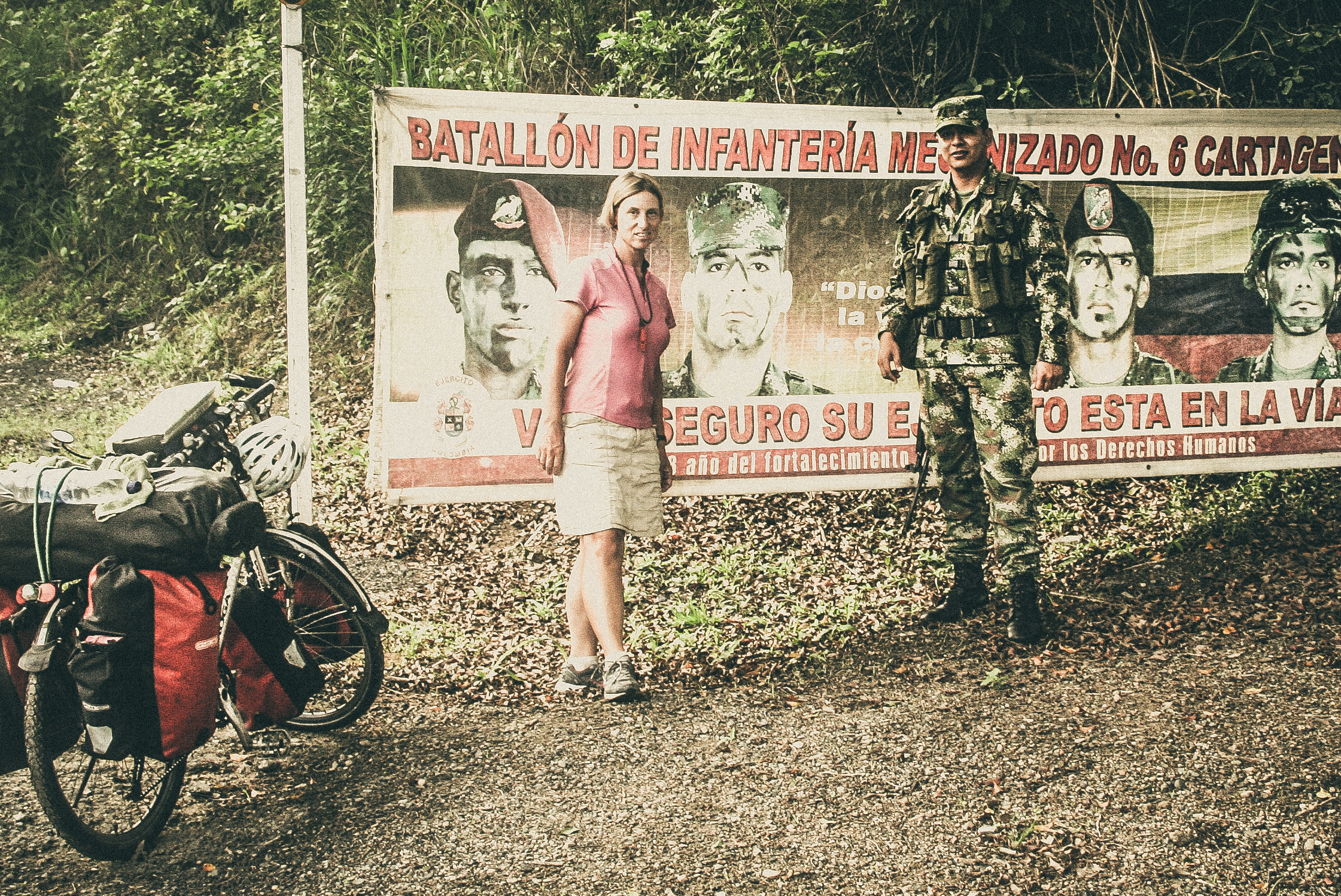 Would you cycle the world's most dangerous tourist destinations? Many people do.

Before setting off on a round the world bicycle tour, it's important to inform yourself about potential hot spots. That way you can make informed decisions about where to cycle based on your personal level of risk tolerance.

In Part 2 of our series, we count down the top 10 most dangerous countries for travelers as ranked by The World Economic Forum's Travel and Tourism Competitiveness Report. Surprisingly, the country ranked as the world's most dangerous tourist destination is also a popular spot for bicycle travelers.

The WEF tourism safety ranking  "measures the extent to which a country exposes tourists and businesses to security risks mainly related to serious harm to people (violence and terrorism)." The ranking does not take petty crime into account.

Note that this report covers only 136 of the world’s 196 countries. Notorious hotspots, including Afghanistan, Syria, Somalia and South Sudan, have not been ranked. Check out part one of the world's most dangerous countries for bicycle traveler's here.

Fighting between Ukrainian armed forces and Russian-backed armed separatists is common in both the eastern and south-eastern regions of the Ukraine, more specifically, the regions of Donetsk oblast, Luhansk oblast, and Crimea. Civilians continue to get caught up in the fighting.

Our take: Since violence in Ukraine is isolated to the eastern region, I’d cycle the western part of the country without worrying too much.

Honduras is home to one of the world's highest murder rates. The department of Gracias a Dios in particular is plagued with crime and drug trafficking, and also lacks police or military presence.

Tegucigalpa, San Pedro Sula, and La Ceiba are other dangerous areas; 70 per cent of US citizen homicides in the past seven years happened in these districts.

Our take: We’ve biked and backpacked in Honduras and the country never really felt safe to me (too many barred windows and bad hombres strolling around town with loaded guns and). I’d go there again, but be extra safety conscious.

Although many terrorist attacks occur outside Nairobi, the threat of terrorism is still high in the city. Grenades, shootings, and stabbings are common forms of attacks.

Our take: Kenya is a vast country and the security situation can vary enormously from region to region. The spikes in violence since 2011 resulted in a decline of tourism but the country still hosts over 1 million foreign visitors per year.

When we cycled Kenya in 2008, we passed through some areas of political unrest, particularly near the northern border with Ethiopia. I’d go bicycle touring in Kenya again, but monitor the security situation closely and avoid visiting near election time.

ISIS and other extremist groups pose serious threats to public venues throughout Egypt, including tourist sites. The groups have also been known to target various modes of transport.

Our Extremist groups were active in Egypt when we cycled there in 2008. At several points, police insisted on escorting us as we cycled in order to assure our safety.

Our take: In 2018, I would not consider cycling through the Sinai due to the high terrorist threat and risk of kidnapping (the US government never pays ransoms and I wouldn’t want family and friends begging for donations on social media in order to pay captors).

I might cycle through other parts of Egypt, but would study the security situation carefully beforehand.

Shortages of basic goods such as water, food, medicine, and electricity have led to much social unrest and crime throughout Venezuela. The country has one of the highest crime rates in the world; armed robbery, murder, kidnapping, and carjacking are all common forms of violence in much of the country. The US Department of State warns against travel to Venezuela.

Our take: I pity the plight of Venezuelans who have been witnessing the decline of their country for decades. We enjoyed backpacking through Venezuela in 2002 but by the time we cycled there in 2010, the country was already suffering from high crime rates and food shortages. Someone would have to offer me an armed escort and a very large sum of money before I’d even consider cycling  Venezuela today.

Two extremist groups, Boko Haram, and Islamic State West Africa, are responsible for much of the violence that occurs in Nigeria, and commonly target heavily populated areas like churches, schools, restaurants, hotels, and entertainment venues.

The US Department of State says visitors "should be vigilant at public gatherings and locations frequented by foreigners" and to "exercise extreme caution throughout the country due to the threat of indiscriminate violence".

Our take: We cycled Nigeria in 2007 and, while the people were some of the friendliest we’ve met, the country didn’t always feel safe. Come to think of it, the friendly factor is rarely a good predictor of safety, even less so in Nigeria.

Extremist groups act with impunity in Nigeria, and for that reason I’d give the country a wide berth these days.

Religious conflict has plagued Pakistan for years and violence against certain religious groups is still common throughout the country.

Our take: I absolutely loved Pakistan when we backpacked there in 1999. The people were friendly and hospitable and the landscapes simply stunning. Sadly, this is another one of those countries that suffers from rampant violence and political instability. Not to mention terrorism and regular roadside bombings.

Pakistan ranks high on my cycling wish list. The Karakorum Highway is one of the world’s most magnificent rides. But for now, I’ll hold off cycling Pakistan.

I’m risk-averse these days, but a fair number of more intrepid Westerners still cycle Pakistan.  I’ve not come across reports of anyone being harmed.

Cycling The Karakoram Highway from Matthieu Tordeur on Vimeo.

Besides having one of the world's highest homicide levels, El Salvador is also known for its many gangs, which are known as maras. Gang violence includes everything from extortion to arms and drug trafficking.

Our take: Another one of those Central American countries with a corrupt police force, rampant killings and an ambiance of insecurity. When we cycled El Salvador in 2010, the security situation seemed to be improving but that doesn’t appear to have lasted. We actually talked with several (former) gang members when we cycled through El Salvador. These guys were always very friendly and keen to chat with foreigners. Several recounted tales of being deported from the US after getting tangled up with the law. The gang members we chatted with were as ‘friendly’ and ‘nice’ as other people we met, but I couldn’t quite get it out of my head that these dudes had likely committed some pretty unsavory acts.

Rebel groups based in Yemen's capital, Sanaa, continue to both target and detain US citizens. Extremist groups such as al-Qaeda are also active in the country, and because of land mines and air strikes, much of Yemen's population lacks basic necessities like food, water, and medical assistance.

Our take: During our Oman cycling tour in 2015, we came near to Yemen, but not even the thought of knocking another country off my list would get me to pedal across the border. Unless you fancy getting blown up by a Saudi bomb, I’d stay far away from Yemen.

Colombia isn't as dangerous as it once was — Medellin was named South America's best destination last year — but visiting the country still poses quite a risk for foreign travellers.

BACRIM, armed gangs, are responsible for kidnappings, drug trafficking, and robberies that occur throughout the country, while acts of terrorism, like explosions, are common in many big cities like Bogota.

Our take: Colombia taking top honors as the world’s most dangerous travel destination really took me by surprise. In 2001 (when the FARC was wreaking havoc all over the countryside) we backpacked through Colombia. (With hindsight, I’d say that was a rather stupid thing to do.)

We cycle toured in northern Colombia in 2010.  Some places felt a little dodgy, but overall far safer than neighboring Venezuela.

I’m still a little perplexed as to why Colombia is ranked as the world’s most dangerous tourist destination. Lots of cycle tourists travel there and I’ve heard of few problems.

The UK government maintains that most visits to Colombia are trouble-free. That’s good enough for me.

This map shows which countries the British Foreign Office considers safe for travel.

What cyclists say about safety 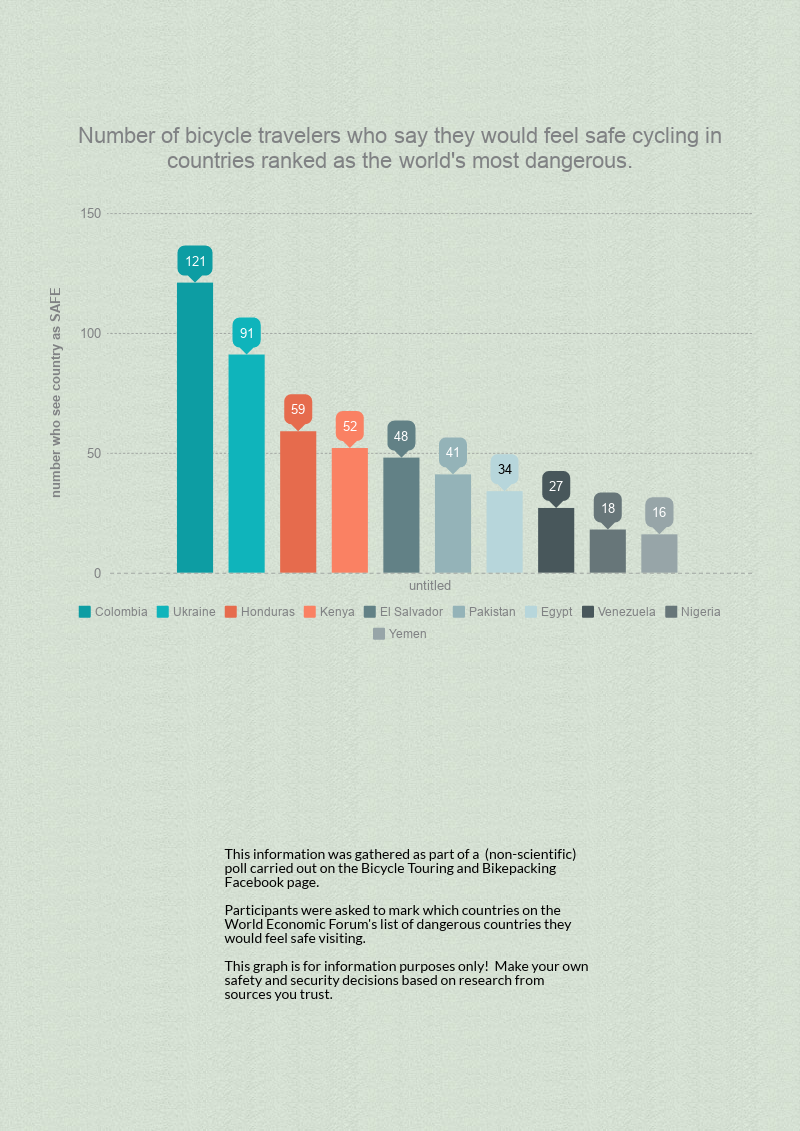 4 thoughts on “Which countries are safe for bicycle touring?”

The World's Most Dangerous Countries for Bicycle TravelersAre you wondering which countries are best avoided on a bicycle tour around...