Four weeks, eight countries...whew.  Our whirlwind tour of the Balkans sounds more like a Japanese package tour than two travelers cycling at their leisure.  It's frustrating just to skim the surface of this region but we must be back by mid-May, says Eric.  He's reserved 'couches' for us along the way and we must keep to the schedule (16 years in Germany has left its mark).  Here's a quick rundown of where we've been and what we've seen. 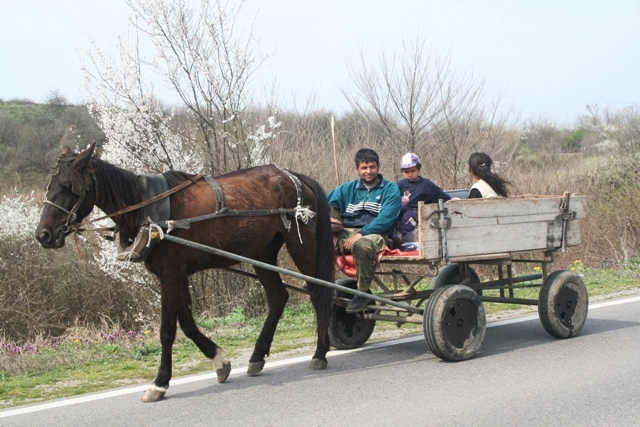 Bulgaria wasn't what we expected.  It now being a member of the EU we were awaiting pristine highways and modern towns.  Bustling cities full of young professionals rushing off to important meetings or relaxing in trendy cafes.  In reality  Bulgaria appeared to be more on par with Africa than Western Europe.  Piles of rotting liter lined the highways and as we passed the Roma settlements (Gypsies for the non-politically correct) dirty-faced kids demanded money and welcomed us with a few low-flying 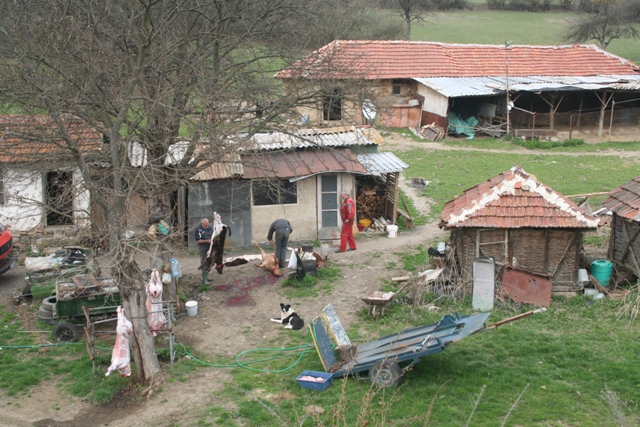 stones when no handouts were forthcoming.  Villages appeared deserted and factories lay empty, their windows broken or boarded up.  The cafes were filled with tired-looking men with deeply lined faces and bulbous red noses leaning over a beer and puffing away on cigarettes.  The cities were ringed with gray tower blocks and vacant buildings in business districts told of tough economic times.  Low clouds and drizzle added to the depressing ambiance.

Thankfully, the locals, albeit a bit gruff at first, were kind-hearted and helpful.  On more than one occasion we were allowed to pitch the tent on the grounds of a village church.

One Sunday morning we were still slurping our porridge and relishing the last sip of coffee when the parishioners began to arrive.  Eighty must have been the average age, most were women and they were all dressed in black, many carrying spring flowers with which to decorate the church.  They eyed us a bit suspiciously, but broke into smiles when we greeted them with a cheery, 'Dobar Den'.
We don't want to make any enemies here, and in all fairness riding along the busy main highway, we didn't see the best side of  Bulgaria.  We did enjoy Plovdiv's Old Town which rivals that of any Western European city in terms of beauty and atmosphere and, more importantly, the ice cream in Bulgaria is really quite tasty.  Our last image of Bulgaria was of a backyard butcher carving up cows, dogs howling and salivating in the distance. 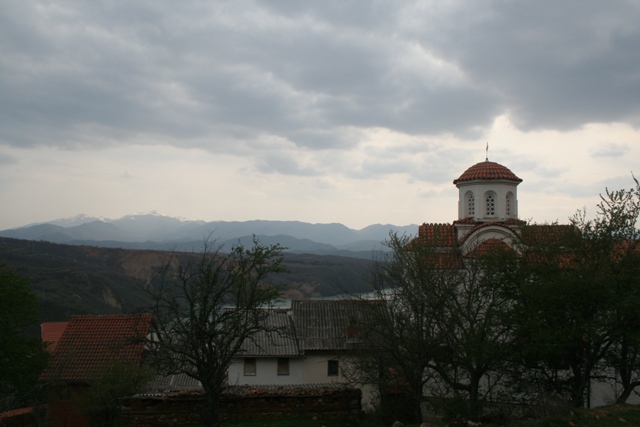 Serbia struck as a clean, orderly place with picturesque villages where old Ladas and Zastavas from communist times ply the cobbled streets.  Older people spoke of the 'good old days' when Yugoslavia was a nation more prosperous than Germany (East or West?  I never had the courage to ask.)  Others complained of travel restrictions and the humiliation of neighboring Bulgaria--a country they once looked down upon for being so backwards--being admitted to the EU.
We were often greeted with great fanfare and it was obvious that foreign visitors on bicycles are rare.  Shopkeepers presented us with shiny red apples, a journalist from Radio Free Europe interviewed us and everybody seemed to be curious about our cycling adventure.  Not quite the instant star status one achieves in Africa, but we did cause quite a stir in some small villages. 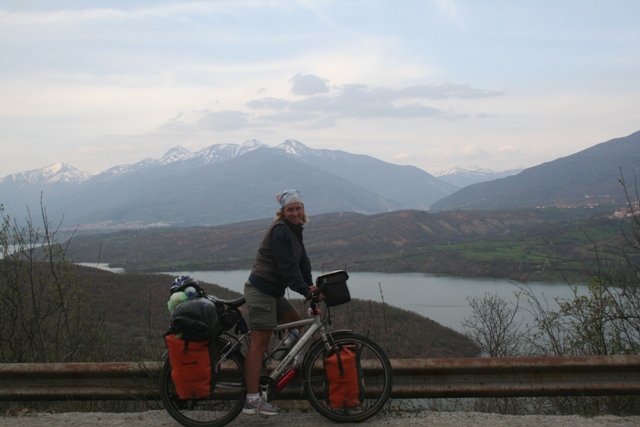 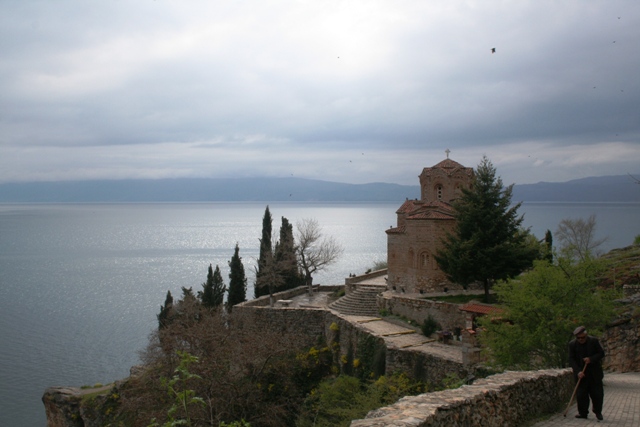 Kosovo seems to be getting itself back on its feet with help from a plethora of UN,  EU and various other international aid agencies.  Villagers complain that there are no jobs and everyone is just getting by, yet a quick glance around and you see big houses, fancy cars and hotels, cafes and restaurants lining the highways.  It's all being built with money from abroad, we're told.

Mountainous Macedonia was quite simply beautiful.  A place of calm cool nature peppered with well-preserved churches and orthodox monasteries.  We loved cycling through the lush green countryside, but could have done without the daily downpours.  Next time we'll be sure to find space for rain pants among our 35 kilos (each!) of luggage. 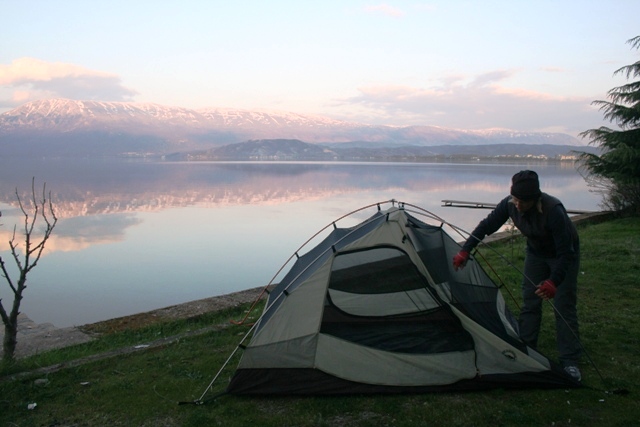 After Macedonia, our next country was Albania, where there didn't seem to be much in terms of work taking place.
In some out-of-the- way villages we saw grandmothers and grandfathers trudging off to the fields with farm implements similar to those my own grandfather probably used when he was working the land back in South Dakota in the 1930s.  In the towns most men appeared to be idling in cafes or revving the engines of their Mercedes.  Some I saw entering seedy gambling joints.  Most people appeared neither particularly poor, nor particularly 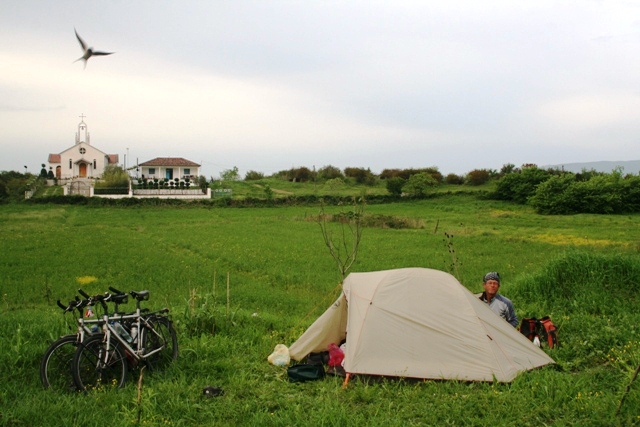 industrious.  The parallel economy is thriving, I'm told, and the first thing many rural Albanians did after the communist regime collapsed was plant marijuana destined for the Western European market.  In Tirana, there are aid agencies galore all hoping to sort out the post-communist chaos in Europe's poorest country.

But it was really Montenegro that we fell in love with.  This tiny country has mounted a full-scale advertising campaign on CNN and BBC World to get the word out about all it's got to offer.  The images on TV (and our photos) don't do justice to the stunning landscape.  We tortured ourselves climbing up an impossibly steep track where the only traffic was a sweet old lady out herding her sheep and then wound around the shores of Lake Shkodra, the largest in the Balkans.  One evening as it started getting dark we spotted a small 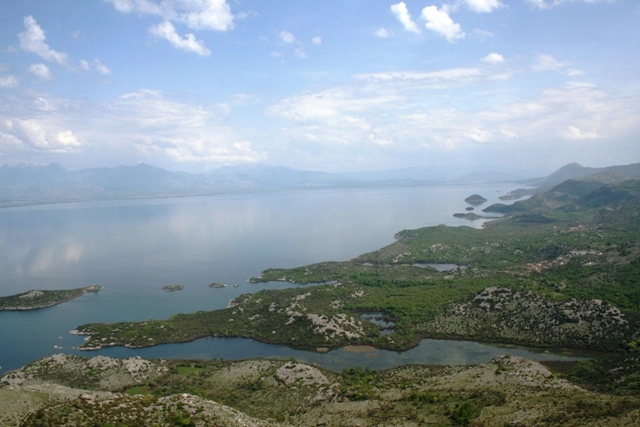 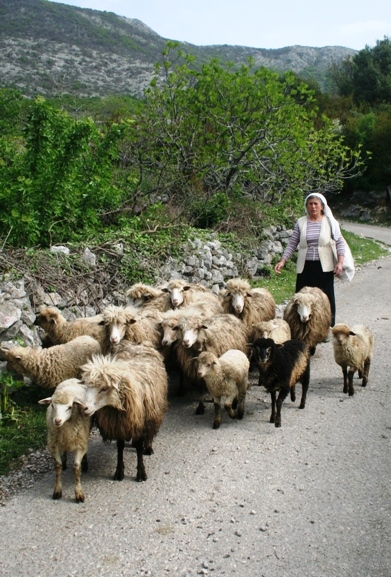 farmhouse nestled into a curve in the road with a spectacular view out over the lake. We knocked and got no answer and then called out 'Hello, hello.  Anybody home?'   Finally, Eric trotted off through mounds of goat droppings and made his way to the red-roofed barn where he gave our would-be host quite a fright.  Not many people wandering around the lonely backroads of Montenegro, I guess.  Our big, burly farmer was a friendly one and immediately agreed to let us camp.  He'd spent 40 years at sea, and had just returned to his homeland to help rebuild his country.  'Nobody in Montenegro wants to work,' he complained.  'I've got to hire Albanians and Bulgarians--they're hungry, they'll do an honest day's work.' 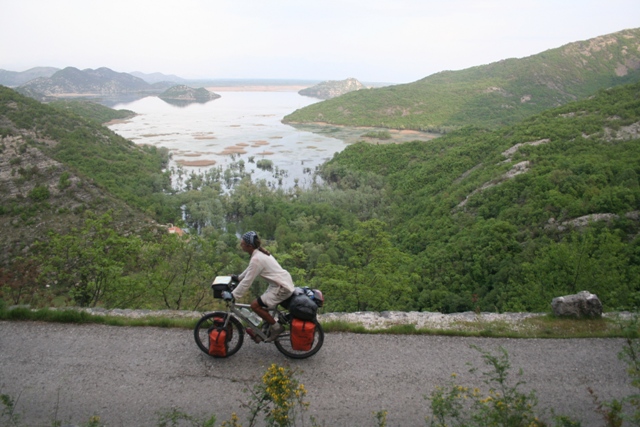 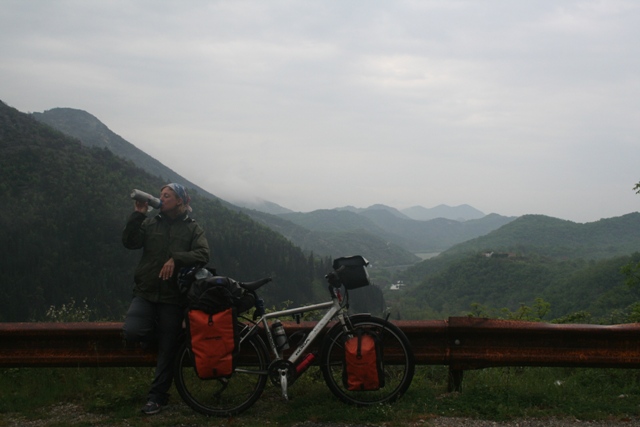 Once we hit the Adriatic coast at Kotor (still in Montenegro) we were passed by a steady stream of  European vacationers in caravan campers and leather-clad motorcyclists out for a ride through the countryside. In the touristy towns we were surrounded by retirees in sturdy shoes and wide-brimmed hats (never mind that it's cloudy) raving about the beautiful scenery and rushing to get back on the tour bus within the allotted 10 minutes of 'free-time' set aside for wandering around alone.  They are a strange species who stand slack-jawed and glassy-eyed as the guide babbles away about ancient history and then switch into animated mode once they're set free. 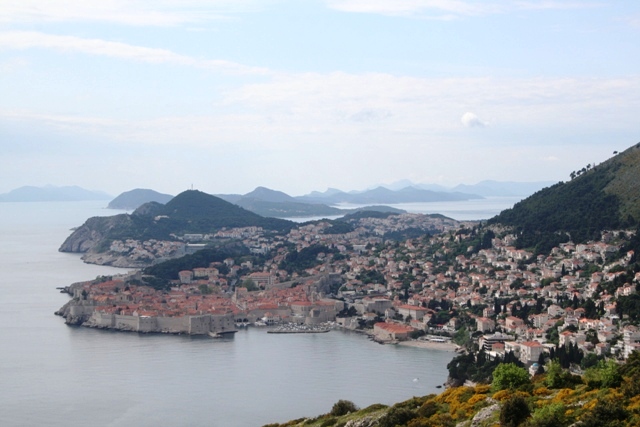 Then it was on to Croatia and 'the pearl of the Adriatic', stunning Dubrovnik, currently a hotspot on the tourist trail that sees some 17,000 visitors daily in the high season.  Ugh.  Even in April, tourists far outnumber the locals as one strolls the marble streets of the historic center. After we'd had enough of exploring the baroque churches, gazing out over the sea and checking out the all the spots marked as 'war damaged' we pedaled through the centuries-old city gate and began thinking about were me might sleep for the night.  'The Solitudo 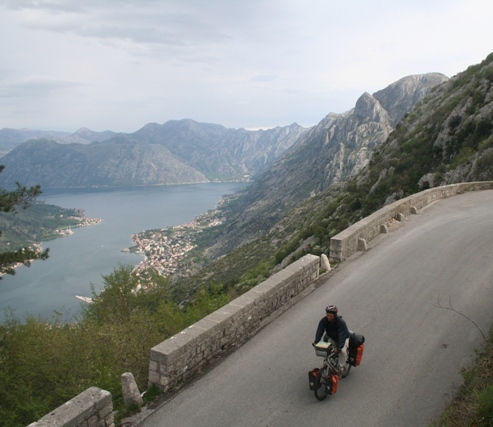 campsite, at almost $30 a night, seemed a bit steep for a patch of grass and a hot shower, so we pushed on until dusk on the busy coastal road watching the changing light on the shimmering turquoise waters below. With almost every inch of the coast covered in hotels and holiday homes, wild camping hardly seemed feasible.  With a rising sense of worry, we turned off the main highway.
We were in a little enclave of second homes and rental units and in front of every building was a sign proclaiming 'sobe, zimmer, rooms'.  An older man was still puttering around in his garden despite the failing light and I urged Eric to approach him with our problem.  I'm always embarrassed to ask for help and have convinced Eric that it's a 'man's duty' to look after his wife.  I never like to listen in on the conversations lest someone becomes indignant at our request and points to a hotel down the street.  Eric came back smiling so I knew we'd found a place to spend the night.  Our gardener and savior was a retiree from Sarajevo who spoke German and insisted his neighbor wouldn't if we camped on his covered veranda.  'A very good spot,' he said.  'Might rain--this way you won't get too wet.'  He was a kindly gentleman a later brought us big jugs of water for cooking and cleaning.  We spent a peaceful night squatting and woke feeling refreshed.  Much better than those horrible mega-campsites that dot the Mediterranean where blaring music from the in-camp disco keeps one awake until daybreak. 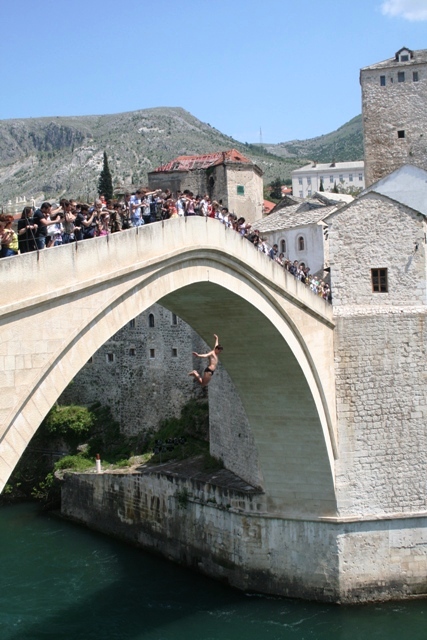 Next, we made a detour into Bosnia to visit Mostar and its famed Stari Most (Old Bridge).  When we arrived, tourists were thronged around the ancient bridge and all eyes were fixed on the muscle-bound boy in a skimpy Speedo who was preparing to plunge into the river 21 meters below.  A young assistant was busy passing the hat ensuring the courageous young man's efforts were worthwhile.  The bridge and the core of the Old Town were rebuilt following severe war damage, but throughout the rest of the city there are still plenty of bullet-ridden buildings and bombed-out houses.  Reminded me a bit of Beirut.

The Balkans don't attract just retirees on package tours, there are also loads of cyclists pedaling around these parts.  In Bulgaria, we met a French couple who are kayaking and cycling through Southern Europe and Scandinavia and a Belgian guy biking through Europe on his own.  In a driving rain in Macedonia we encountered another Belgian guy cycling around the Balkans.  We crossed paths with a young Basque guy (not Spanish, Basque!)cycling towards Athens.

In Montenegro, we flagged down an energetic young German cycling through the region.  Just outside of Dubrovnik one Dr.Siegfried Wiesenhofer from Austria was huffing and puffing his way up a steep hill.  And finally we met up with Stefano from Italy, decked out in full cycling gear like a Tour de France racer and equipped with shiny new bags that he didn't yet know how to close properly.  From his bar bag he proudly produced a laminated photo of the Virgin Mary.  We've met as many cyclists in a month as in two years of travel in Africa.

As you can probably imagine, the bikes and equipment are showing signs of wear and tear after more than 50,000 kilometers.   On a steep descent my front tire suddenly exploded and I went flying on to the pavement.  Luckily nothing more than a nasty scrape and some aching muscles.  Our panniers are now only semi-waterproof and the bikes have developed lots of annoying squeaks and rattles.  From our current location in Split, Croatia there are just 1,307 kilometers to go till we reach Obernai.  We're feeling worn out and weary and can't wait to spend a few weeks resting and recuperating before we embark on the next stretch of road:  the Americas await! 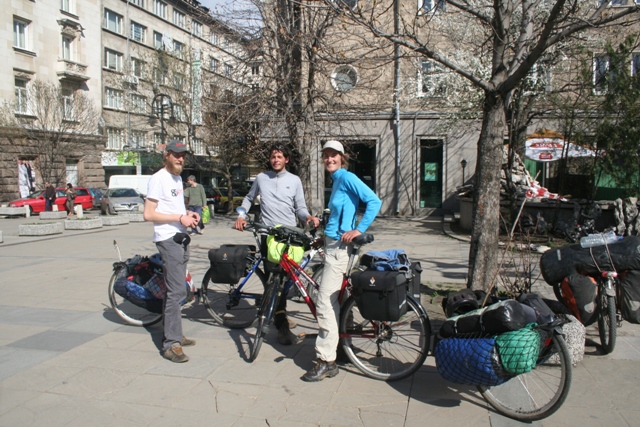 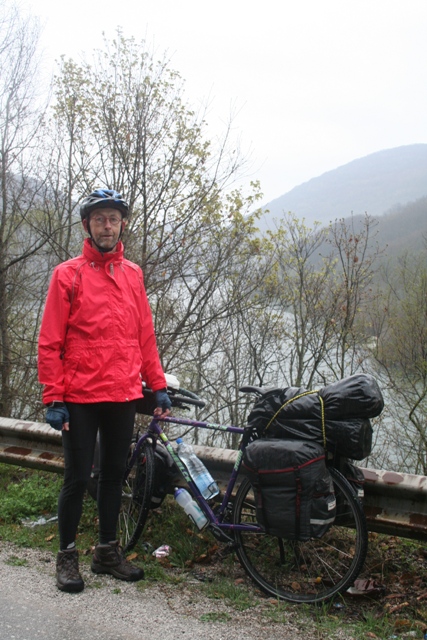 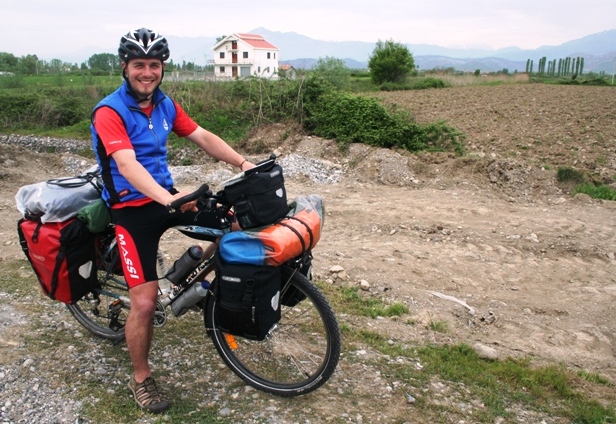 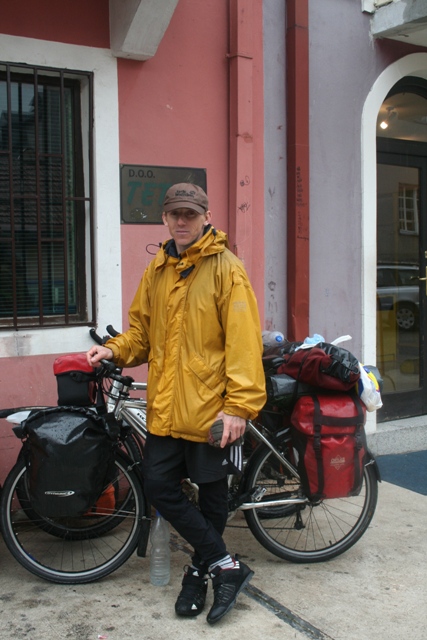 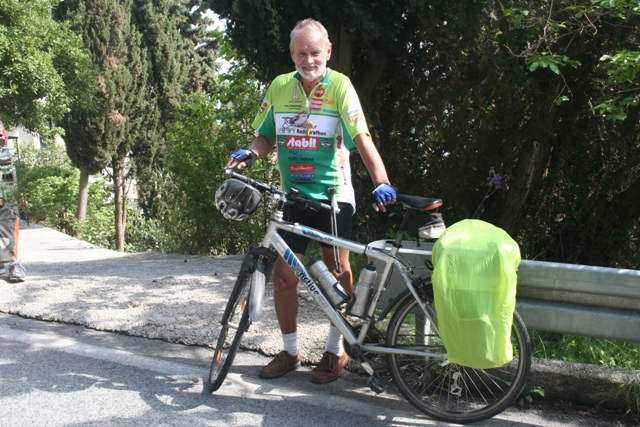 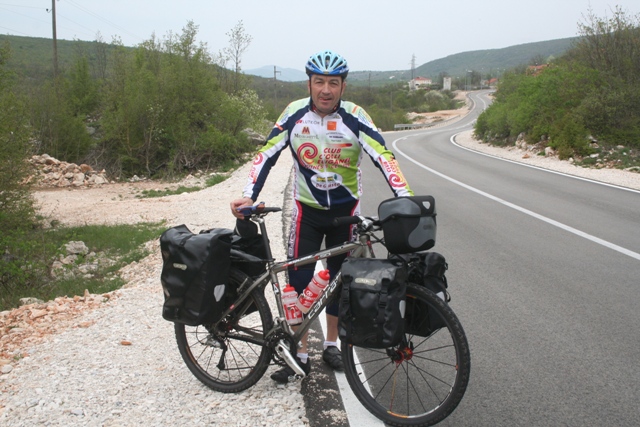 2 thoughts on “Biking the Balkans”

update 3. Santiago and the road to the end of the world21 July, 2006Le Puy, France to Tui, SpainLocation: Sines, PortugalTotal...