Back on French soil.It dawned on me, as I kept watch on Eric hooked up to an IV on a hard hospital bed In Kourou, that June 6th marked four years on the road. 1,460 days spent cycling more than 75,000 kilometers through 75 countries on 5 continents. This milestone, it seemed, was worthy of some sort of acknowledgment.

But with Eric weak and drenched in a feverish sweat, I knew celebrating was out of the question. Not even a trip to the patisserie in his feeble state.

watch out for the mosquitos at awala.

Dengue, said the doctor. No cure. Just time. Gotta let the body sweat it out of the system. A month, perhaps, and he could hop back on the bike. A month? Stuck in French Guiana? Resting up. Never, I vowed.

The French, I've always believed, are strong on the melodrama when it comes to illness. The slightest sniffle and my in-laws are hinting that I ought to rush off to the emergency room.

the origins of our dengue troubles

I was pretty certain Eric had picked up his dengue fever at a place called Awala. Situated on the Atlantic coast, Awala's famous for the giant leatherback turtles that gather on its beaches to lay their eggs. The leatherback is the largest of all living sea turtles, sometimes measuring more than six feet in length and weighing up to 1,500 pounds.

A stray sea turtle just after hatching.5We'd hit the jackpot and arrived at just the right season to see these amazing creatures trundling up on shore to lay their eggs. Camping on the beach was obviously the best way to catch a look at the leatherbacks in action since they normally lay their eggs after sunset. Sounds great in theory, but Awala must have the highest concentration of mosquitoes outside of the Everglades. It was a full-on assault as soon as the wind died down. Worst night of camping we've EVER endured. Worse than getting flooded out in Oregon. Worse than getting caught in a freak desert storm in Mauritania. Worse than the freezing temperatures of the Sinai in January.

For all our trouble--Eric catching dengue and all-- we thankfully couldn't have had a better sea turtle experience. Not only did we get to watch a giant leatherback laying her 90 odd eggs, we also witnessed a whole batch of tiny green sea turtles hatching and scampering across the beach to be washed out to sea. Best nature experience of the entire four years on the road. Even better than the lion who'd ingested half a zebra in Zambia. 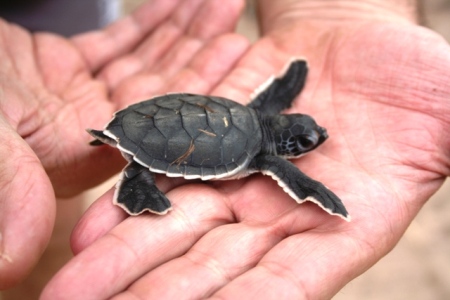 a taste of asia on the atlantic coast

Just like Laos.The second best thing to see in French Guiana (well, maybe the third...the space center's pretty amazing, too) is the Sunday market at the Hmong village of Jahouwey. Wrinkled old women that look like they're straight out of a village in the highlands of Laos sit hawking their beautiful hand-woven textiles and old men sit hunched over bowls of spicy noodle soup slurping loudly as they chat away in their native tongue. There's sticky rice and papaya salad and you'll be hard pressed to find a baguette or anything else that reminds you you're on French soil. For us, it was a sentimental trip back to 1996 when we met in Laos while backpacking through Asia. 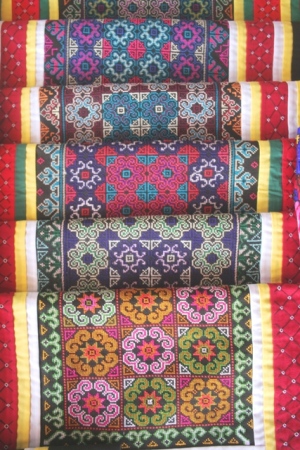 Sea turtles and charming market towns don't carry much weight when you're lying in a feverish dengue-induced sweat. But slowly Eric regained his strength. The fever disappeared and after a mere 10 days, my brave husband was back on the bike. So much for a month of rest.

What lay ahead, not long after we pedaled out of Cayenne and on to Brazil, was one of the worst roads in South America. It's 2010, but the Brazilians still haven't gotten around to entirely paving the 'highway' to French Guiana.

The roads was a mess. An especially muddy mess during the torrential June rains. And a hilly muddy mess at that. Perhaps it suffices to say that one day we did 25 kilometers before giving up exhausted. Three days to conquer the longest 165 kilometers of mud and muck I've ever endured. You can check out all the fun on our latest Bicycle Touring Video: The Worst Road in Brazil 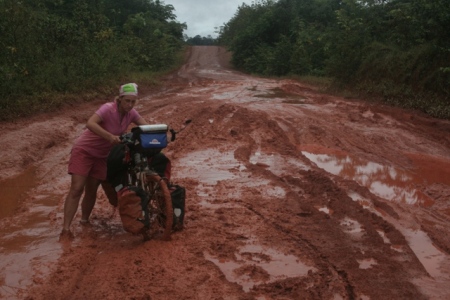 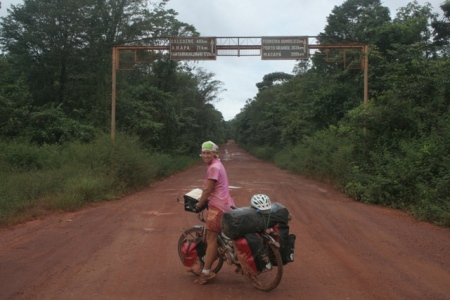 But we made it. To Macapa. An island of a place in remote northern Brazil literally cut off from the south by road. Now we're in for a ride on a riverboat. An Amazonian river boat.

on to the amazon

For all those who like statistics, the Amazon is the largest river in the world by volume, with a total river flow greater Friendly locals on the road to Macapa.than the next top ten largest rivers flowing into the ocean combined. At no point is the Amazon crossed by bridges because, for most of its length, the river flows through tropical rainforest, where there are few cities and even fewer roads. The Amazon basin, the largest drainage basin in the world, covers an area of some 6,915,000 square kilometers (2,670,000 sq mi) or some 40 percent of South America.

We're in for a wild and amazing Amazon boat trip on the MV Coronel Jose Julio all the way to Belem. Time to stock up on some super strength mosquito repellent.

5 thoughts on “Biking the Guianas: dengue dampens the fun”