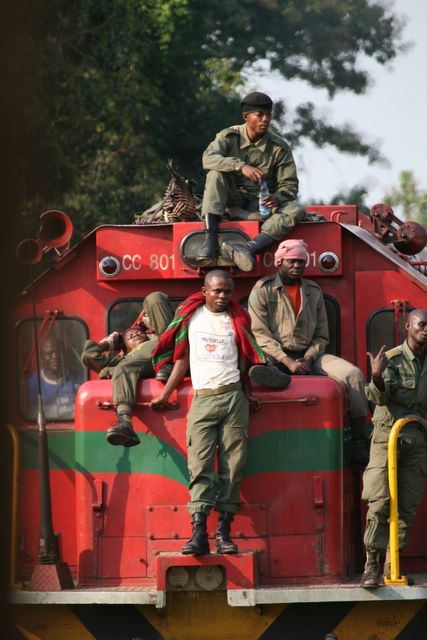 Dangerous dudes? Not in our experience.

You want adventure and know Africa’s the place to find it.  But when you switch on the news, the stuff coming out of Africa is hardly reassuring —coups, famine, civil wars, violent street protests.  You’re thinking, “I won’t  last a day before my bike’s been nicked and my wallet’s gone missing.”

Many cyclists write to us about safety issues in Africa.  They’re worried, just like you.  Just like we were before we set off on our cycling expedition.

Safer than you imagine

This may come as a surprise, but we rarely felt in danger while cycling in Africa. Having traveled through more than 100 countries, I have confidence in my instincts about what’s safe, and what’s not.
And I don't think this sense of safety came out of naivety or denial of danger.

Experience tells me that most of Africa is far safer than Latin America, although probably not as safe as many Asian countries.

Where the real danger lies.

Big cities in Africa are dangerous.  Just like big cities are dangerous all over the world.
Since you’re on a bike tour, you’ll probably want to give most big cities a wide berth.  Sometimes, big cities can’t be avoided—you need a visa or you’ve got to stock up on supplies.

Don't worry.  As long as you don’t bike at night or do something really foolish like cycle through a slum and start flashing around a fat wad of cash, you’re unlikely to run into trouble.
Sometimes locals will tell you that a particular stretch of road is known to attract highway bandits.  Now if you run into a bunch of these scary guys on a lonely stretch of road, you’re in trouble.  Fortunately, bandits in Africa are not known to be particularly violent.  You hand over your cash and camera, end of story.
Mostly, staying safe is a question of keeping your wits about you.  Don’t play the fearless adventurer by biking through an area that is recovering from civil war, controlled by Islamic militants, or known for unrest.

In our experience, Africans are very honest.   You can leave your fully-loaded bike unlocked while you have lunch or do some shopping and nobody will snatch anything or pedal off into the wild blue yonder.

Eric once left his handlebar bag containing his passport, credit cards, expensive camera and loads of cash in a small shop and then rode away.
When he realized his mistake, we hurried back only to find that the shop assistant had already sent out a small boy with Eric's most cherished possessions to track us down. When we finally caught up with the boy, he returned the bag and all its contents.

Ask yourself how likely this is to happen in your home city.

Nigeria, DRC-Congo, and South Africa are probably the most dangerous countries we traveled through. Nigerians were very friendly towards us, but the tension was palpable in larger cities. It is definitely a violent country, and if you read the newspapers too much or any security warnings from the US State Department, you'll be put off from going there.
The DRC is also a country in which you're bound to run into problems if you spend much time there. While the average man on the street is friendly and welcoming, police and military are hyper-corrupt and plenty of former soldiers are now unemployed youths cum thugs.
South Africa has got one of the highest murder rates in the world.   Most middle-class citizens have barricaded themselves behind burglar bars, electric fences, and intricate alarm systems.  In spite of this, it’s one of our favorite countries on the entire continent.   But be vigilant—this is not a country for stealth camping.  Again, we avoided rough areas and spent three months in South Africa without encountering security problems.
These days, South Sudan is experiencing famine and many parts of the Maghreb are undergoing tense times.  Much of Ethiopia is in turmoil and Somalia continues to be a no-go country for Western tourists.

The vast majority of individuals we have encountered around the world have been warm and welcoming.   As long as you use common sense, you’ll come home from your Africa cycling expedition with stories of kindness and hospitality, not tales of danger and violence.

We cycled Africa from 2006-2009.  Although the way of life in villages probably hasn't changed much in the past decade, political and safety situations can change quickly.
Be sure to get updated information before you travel.

Check out our brief Guide to Bicycle Touring in Africa for more links and updated Africa information. This guide was kindly curated by Grace Johnson, editor of Bicycle Traveler Magazine and Impressions from Bicycle Travel.

What to wear? Tips for women cycling in conservative countries

Do women need to follow special dress codes when bicycle touring in conservatrive countries? In almost all countries, women are...