When you pedal almost 90,000 kilometers around the world, you’re bound to have some out-of-the-ordinary experiences.  Here are a few them.

I never thought I’d end up…

1.       Sleeping on the floor of an all-women’s mosque on the border between Syria and Lebanon during a freak snowstorm.

2.       Learning to love cycling through the desert…even with the sun beating down and temperatures soaring to well over 100 degrees Fahrenheit.

3.       Having the Egyptian military stop all traffic so we could bike solo through the Suez tunnel connecting Africa to Asia.  We caused a major traffic back-up, but were met with applause and whistling when we finally popped out in the Sinai on the other side.

4.       Being the only south-bound guests to ever spend the night at a safe-house normally hosting migrants headed north in search of a better life in the United States.  A sobering experience that reminded me, once again, how the randomness of birth place determines so much in life.

5.       Avoiding a run-in with the so-called ninja rebels who controlled much of the Congo’s countryside by boarding a freight train guarded by scruffy, heavily armed and half-drunk government soldiers.

6.       Being woken up in our tent on the West Bank in Jordan to a group of well-armed soldiers with their weapons pointing right us.  They ended up being friendly enough, just concerned about tourists wild-camping in such a sensitive zone.

7.       Regularly setting up our tent smack-dab in the middle of the market in small towns throughout Brazil.  A strange concept for us, but Brazilians find it quite normal to sling their hammocks up at markets and gas stations while traveling.

8.       Getting pulled over by a local Sherriff not once, not twice, but three times for such a serious offense as ‘cycling on the road’.  In some states, those on bicycles really are third-class citizens.

9.       Grabbing on to the back of a truck and hitching a ride up a steep hill in Burundi.

10.   Dodging stone-throwing youths in Ethiopia.  The only country in Africa where I was really truly glad to get out.  The Sudanese just across the border were far friendlier.

11.   Coming down with Malaria twice.  Could have been worse.   Eric also got laid up with malaria twice plus a nasty case of Dengue Fever and a mysterious case of Typhoid Fever.  He even managed to pick up pneumonia and break his collar bone.

12.   Camping at a military compound in Colombia and spending the evening listening to the soldiers brag about taking on the FARC.

13.   Sampling all of Syria’s delicious sweets and pastries and seldom pulling out my wallet to pay.  Syrians are generous by nature and so thrilled to see foreign visitors on bicycles that local shop owners almost always insist it’s on the house.

14.   Pedaling right past elephants, zebras and giraffes in southern Africa.  Just glad we never crossed paths with a hungry lion.

15.   Getting caught up in tribal warfare between the tribes of northern Kenya and Southern Ethiopia.  Locals insist the internal conflicts never affect foreigners, but it’s hard to feel safe when cycling past men toting AK-47’s and sharpening spears for battle.

16.   Meeting up with former child soldiers in Sierra Leone and finding them quite normal, just like any other teenage boys.

17.   Taking a ride on a riverboat down the mighty Amazon.

18.   Meeting up with all sorts of slightly crazy Americans.  From Greenpeace loving vegans in California to an exorcist in Missouri and an out-house using recluse in the hills of Kentucky.  We learned something from each and every one of them.

19.   Crossing the Omo River with my bike and all my belongings perched in a precarious dugout canoe.  Could have lost everything in an unanticipated tip. 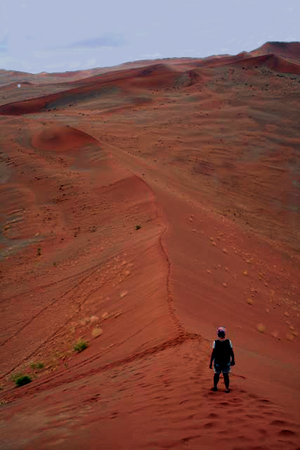 21.   Peering out over Cape Town from atop Table Mountain.

22.   Partly pushing, occasionally riding my bike along the worst road in Brazil.

23.   Biking through the giant Redwoods of northern California.

24.   Touching down at JFK and cycling into New York City. At night.

25.   Being offered hospitality by complete strangers in every, single country we have cycled through.  When you’re on a bicycle, it seems the good people you meet outweigh the bad ones by about 1,000 to 1.