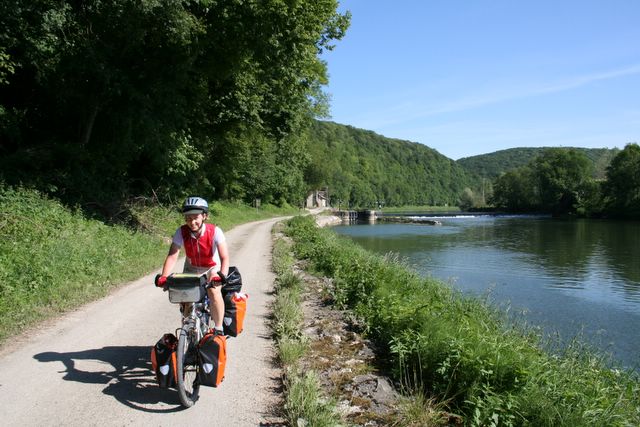 After cycling what will certainly be counted amongst the 8 hottest days of the year, we arrived in Le Puy, the starting point of the pilgrimage route leading to Santiago de Compostelle. Mother Nature decided that the onset of summer would coincide with our departure and we've had scorching afternoons ever since.

On Day One we cruised along both banks of the Rhine, allowing us one final chance to bid farewell to Germany and treat ourselves to a delicious Spaghetti Eis (ice cream specialty that resembles a bowl of spaghetti, but with a strawberry rather than tomato sauce ).  We knocked off just over a hundred kilometers without undue effort and were pleasantly surprised to see that hauling 30 kilos of equipment on the back of a bicycle is as demanding as we had imagined.

Curious individuals often ask why we didn't choose a tandem for our trip.  The answer is simple:  we both like our independence and Amaya has no desire to spend 18 months staring at Eric's backside.  But cycling separately can pose problems--especially at a crossroads.   More than once we've been obliged to flag down passers-by and question them as to whether they've seen a similarly outfitted cyclist, and if so in which direction was he/she headed.  So we developed 'the whistle system' which numerous villages in Franche Comté are now well-acquainted with. 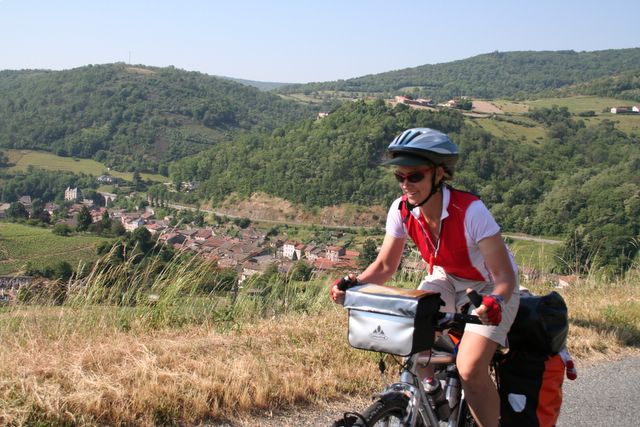 Bike paths and gentle riding quickly disappeared and within a couple of days we found ourselves tackling the imposing hills of the Jura and the Beaujolais region of Burgundy.  A long, steep climb brought us to St Cyr Le Châtou, where we arrived just in time to gorge ourselves on the leftovers of Sunday's fête du village.  Fresh cheese and pasta salad were kindly offered when the mayor took pity on us after having announced that we certainly wouldn't find a grocery store open within several hours' ride.  The food had been intended for local livestock who had to content themselves with stale baguettes instead, which was all that was left after our passage.  Lesson learned:  Monday is a day of rest for rural shopkeepers in the heart of the French countryside. 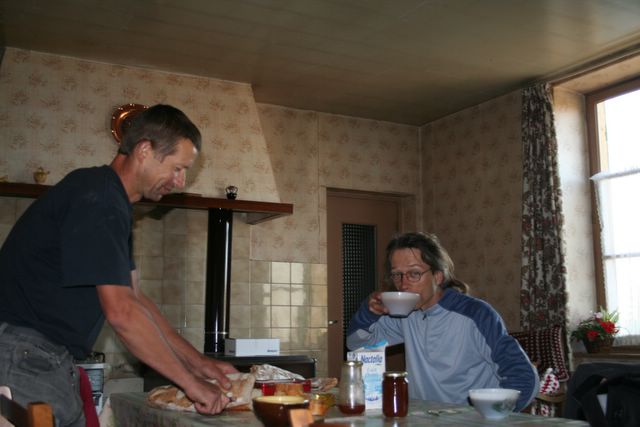 Campsites are a rarity along the backroads of the Beaujolais.  We had resigned ourselves to a night of wild camping,  when Gérard appeared:  our savior. The sun was already low in the sky and we had already three hilly passes behind us as we slowly made our way up yet another hill and ... There was Gérard attending to his vineyard.  An avid cyclist himself, he enthusiastically welcomed us to camp under his cherry trees, offered Amaya a much-needed hot shower and Eric a taste of his Beaujolais nouveau.  Hot coffee, homemade jam, and a baguette awaited us the next morning to fortify us for the never-ending hills that awaited us.  Now that's hospitality!

We hope you will be as pleased as we were to learn that St Bônnet le château is not only a well-preserved medieval village (which can only be reached by arduous, winding roads) but also the world capital of pétanque (boules).  For us, it offered a foretaste of the Pyrenees. While mapping out the following day's ride we realized with much dismay that yet more climbs were in store for us.  A quick consultation with some retired locals led to an alternative route consisting of an easy descent to the Loire valley and a pleasant ride following the meandering river of the same name.

We are now enjoying a well-deserved rest day, playing tourist and seeing the sites of Le Puy.  Tomorrow bright and early we'll set of on the via podensis leading to the St Jean pied de Port, another crossroads to Santiago de Compostelle at the foot of the Pyrenees. 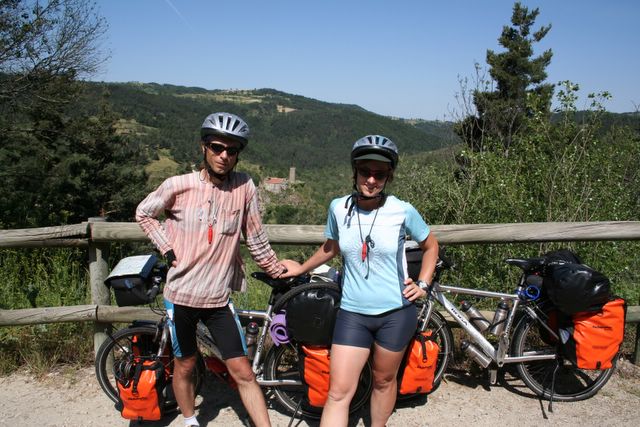