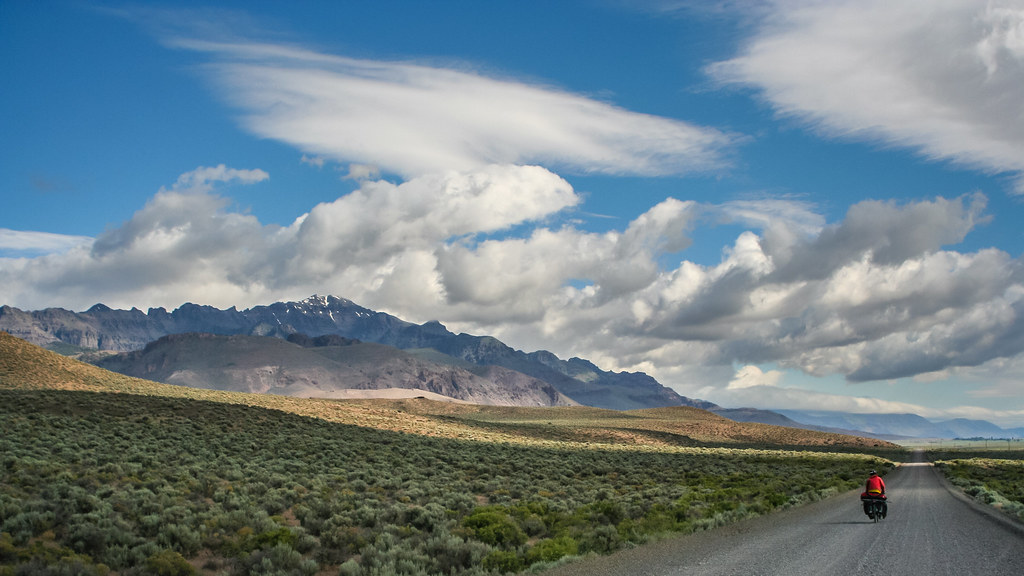 “The most stunning, unique route in Oregon.” Who’d want to miss that?  Not us.  Bikepacking Oregon’s enthusiastic praise had us sold:

Steens Mountain is one of the most spectacular places anywhere.  The dramatic rise of this fault block mountain above the surrounding landscape and its impact on the topography, including the Alvord Desert and the Malhuer Wildlife Refuge, makes for an unforgettable experience.  Starting in Frenchglen, you’ll get to completely circumnavigate the mountain, adding in hot springs, our usual flavor of remote gravel riding, and a little taste of classic Americana as you pass through Fields. Other highlights along the route include strange geologic features like the Borax Lake, catching sight of wild horses up on Steens Mountain, and beautiful glacier carved valleys high up on the mountain loop road.

Before hopping on the Steens Route, another little adventure awaited us: the back roads connector from the Old West Scenic Bikeway. With help from Jimi Soupir, our knowledgeable Warm Showers host in Prairie, we plotted a route using Forest Service Roads to get us near Burns, the jumping off point for the Steens Loop. Jimi is a former Forest Service employee so naturally he’s a pro when it comes to remote route planning.  The route was beautiful (as is most of the American West) but not exactly easy. Grinding gravel up some fairly steep climbs was often rough going.  And the roads were remote.  Much more remote than anything we encountered on the actual Steens route.  We were surprised at the number of tracks crisscrossing the forest.  Our paper maps were useless but offline maps from Maps.me on my mobile phone saved us from getting hopelessly lost. The only folks we crossed paths with were a couple of sketchy looking dudes in a pickup truck, a kindly forest ranger and her dog, and an armed threesome from a place called the Cow Camp.  We enquired if we might also camp alongside (we were running low on water and no streams in sight) and were flatly refused. “Nope.  Not allowed.”  Got it.  We moved on.  No point messing around with inhospitable cowboys slinging pistols.

One of America’s most notorious towns

The town of Burns earned notoriety during the recent standoff with federal agents on the nearby Malheur Refuge.  Things got nasty and the community remains deeply scarred and divided. Much of Eastern Oregon has a wild, frontier feel to it.  More along the lines of what you imagine in a place like Wyoming or Montana (I’m talking EASTERN Montana—not oh-so-cool Missoula).  I’d always associated Oregon with rain and radically progressive craft beer drinking NPR listening leftists.  In Harney County, home of Steens Mountain, the only Democrats you’re likely to run into are tourists riding bicycles. When we arrived in Burns, hot and smelly after our ride through the forest, we found vendors from a Gem and Rock Show setting up their rigs and wares in the city park.  Perfect.  We pitched up our tent alongside and had a free camping spot for the night.

A visit from the sheriff

While sleeping in City Parks is entirely accepted (even encouraged) in communities along the popular TransAmerica cycling route, we discovered not all states are keen on the practice.  Just before arriving in Boise, the local sheriff shone a big bright light in our tent just after midnight.  Apparently sleeping in city parks is an offense, punishable by fine or imprisonment (the sick system in which poor people get locked up, lose their jobs and spiral downwards). Seeing we were harmless cyclists, the kindly Sheriff refrained from issuing a ticket and suggested we pitch the tent down under the bridge.  “Under the bridge?” I repeated. Seemed like the sort of place that scary sorts frequented to inject drugs and commit acts of vandalism and violence.  I felt safe in the city park surrounded by tidy, well-kept suburban homes.  That bridge though… “Yeah, normally camping isn’t allowed down there, but I’ll make an exception for you.” “Yeah, thanks.  I guess.”

Off to the High Desert

You’re reading this blog post, so obviously we weren’t shot and murdered by some bicycle hating psychopath. What we actually found under the bridge was nice riverside camping and a handful of friendly fisherman.  So thanks for the upgrade, Sheriff! From Burns we set off into an empty expanse of High Desert country.  Our first pit stop came at a place called The Narrows.  It’s just a little country store and RV Park but it’s got one essential thing: shade!  Something we’d come to covet over the following days. Much of the Steen’s Ride is blissfully flat, but there’s a killer hill just out of The Narrows.  Killer hill and, much worse, monstrous mosquitoes!  Swarms of them feasting on my sweet blood.  Being severely overloaded and slightly out of shape (the many comforts of riding in the developed world have caused a degree of laziness in us) I couldn’t get much momentum going and couldn’t escape the dreadful beasts until I crested the hill.  The reprieve was short-lived.  Back on the flats, mosquitoes buzzed and bit all the way to Frenchglen.

Frenchglen is home to a friendly country store (they’ve got red licorice at 5 cents a pop so I was happy)and the historic Frenchglen Hotel which dates back to 1923 ( alright, if you’re European I know this won’t impress you but that’s old in the American West.) Best of all, the Frenchglen Hotel has a wonderful screened porch where you can enjoy the view and escape the biting monsters.  Plus the friendly manager (#roadangel) has been known to bend the rules and allow touring cyclists use the facilities and camp out back. Early next morning I peeked out of the tent and caught a spectacular sunrise and another thousand bites.  We packed up quickly and headed out of town.  Within a few minutes of climbing, the mosquitoes had entirely disappeared.  Seems these nuisances just congregate in the soggy wetlands.

Day two was filled with spectacular vistas and many “oh my god…it’s so beautiful moments.”

Sadly (or possibly happily) the actual road up Steens Mountain was still closed due to heavy snow pack.  It’s meant to be a spectacular ride up to a summit elevation of 9,733 feet (2,967 m). With all our superfluous stuff, that would have hurt. Bikepackers we are not.  But we finally met one.  Wesley, from Los Angeles.  Looking sleek and ready for the Steens Summit with his light load.  I’m just a teeny bit envious until I remember how much I like my fluffy pillow and large laptop computer for video nights in the tent. 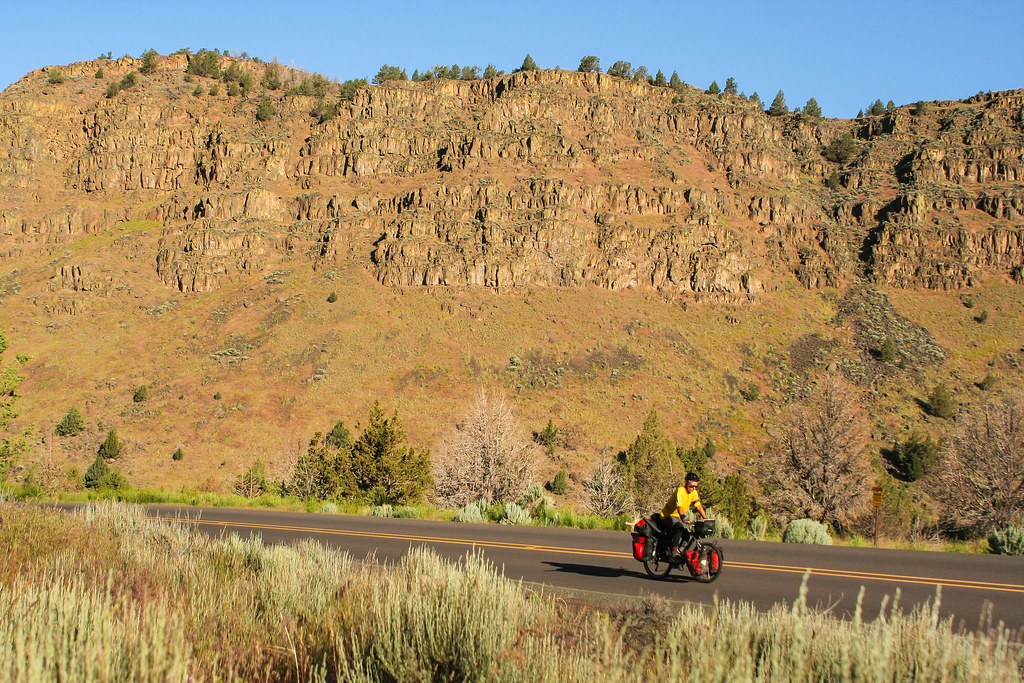 Most cyclists on the Steens Route stop off for the night in a little place called Fields where they fill up on milkshakes and massive burgers.  Being budget cyclists and schlepping enough food to last a week or more, we pushed on.  Our map indicated a place called Andrews and a local rancher had assured us there was somebody living there, so we were confident we’d come across a water source.  Water, rather than terrain, is the real challenge on the route. Here’s what Oregon Bikepacking has to say on the issue:

Water is a serious issue between Crystal Crane Hot Spring (mile 73.8) and Fields (mile 178.2), in that there are no reliable water sources between the two and you are likely to be dry camping somewhere in between.  Do not be fooled by the “lakes” on the east side of Steens Mountain.  While several have water in them, none are drinkable.  The water is highly alkaline and not potable regardless of any filtering/treating.  You will presumably need to carry 2 days of water from Crystal Crane Hot Springs.

Now, I’m a huge fan of the Bikepacking Oregon website.  It’s an incredibly useful resource with stunning images. But I don’t quite agree with their thoughts regarding water access on the Steens route (possibly things have changed since they posted the info). There are at least three possibilities for water between Fields and Crystal Crane Hot Springs.  In a pinch, you can get water at the converted school in Andrews, at the Alvord Hot Springs, and even at mucky Mann Lake (you’ll need a good filter, but highly alkaline water won’t kill you or even make you sick).

A Ghost Town and an Artist

At the ghost town of Andrews, we had the great good fortune of meeting renowned artist John Simpkins and his lovely poodle Phoebe.  John actually uses the former Andrews School as his art studio. We were kindly showed where to fill water bottles and indicated a spot to pitch our tent for the night. We were grateful for the opportunity to top up on water in the middle of the desert and I asked John explicitly if he would mind other cyclists coming to get water from him at the school.  He said he’d be glad to help!  So if you’re in desperate need of water on the Steens Loop, John will gladly come to your aid.  Another one of America’s many road angels. The morning leaving Andrews was the most spectacular of all.  The wind had whipped up and the sky was dark and brooding. The force of Mother Nature in such an extreme and harsh environment was palpable.  We skirted around the Alvord Desert and finally made it back to the main highway and headed for Boise. So, the question remains…is the Steens Mountain ride the most stunning, unique route in Oregon?  Quite possibly, yes!

Private Road.  No Trespassing. We’d learned to love navigating with online maps, but his time they’d steered us wrong. Did...