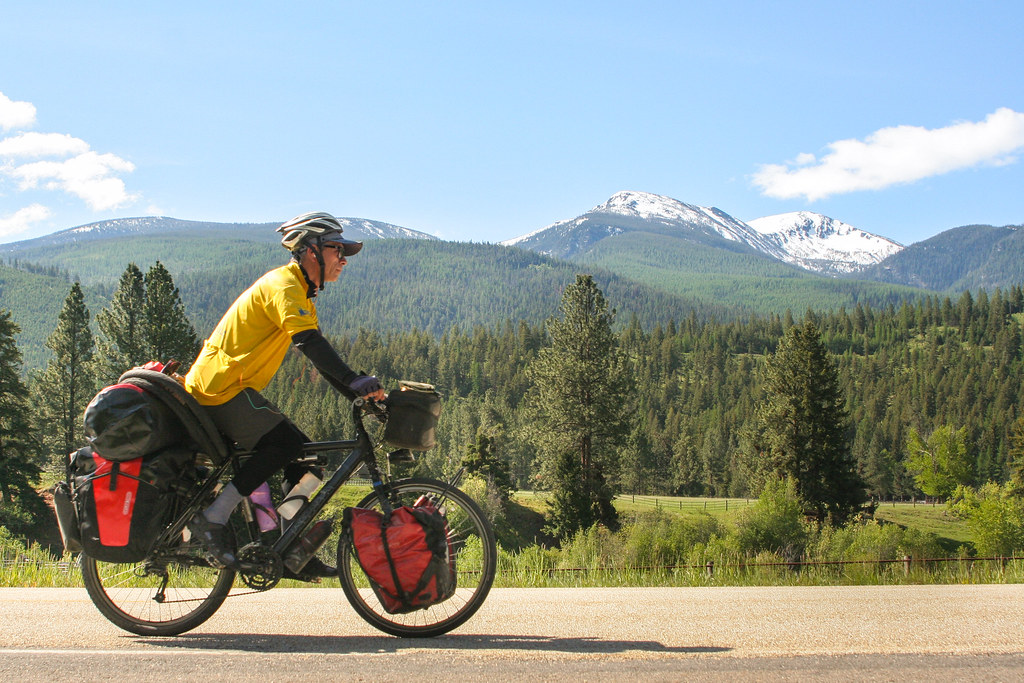 One last ride across the University of Montana campus and we were ready to roll.   A familiar feeling of intense excitement mixed with melancholy swept over me.  Montana felt like home and it was hard to leave.

I liked Missoula and its mélange of hipsters on clunky bikes and rednecks in humongous pickup trucks.  The city maintains a strong sense of community in spite of superficial differences.  A love of nature and the great outdoors is what defines most Missoulians.  Eric and I fit right in.

Our route was taking us over Lolo Pass and the Bitterroot Range and into northern Idaho.  We’d been off the bikes for several weeks catching up with family.   A mountain pass (albeit a small one) seemed a daunting endeavor for Day One.  Fitness goes fast.  Way too fast.  As we chugged up the gentle grades of Highway 12, my legs felt feeble and the Koga unusually slow and sluggish.

Later, I’d learn why the ride had seemed so taxing. Being out of shape wasn’t the only culprit.   Aaron Lisco—the gifted bike mechanic from Gravity Sports in Mc Call, Idaho, pointed out that my alignment was off causing extra friction.

My beloved Koga was, apparently, approaching the end stages of its useful life. Aaron miraculously whipped her back into shape, but suggested  that we transition to newer models with Rohloff and all the bells and whistles.

As I see it, the Koga is now performing better than ever.  Gears shift when they should. Most of the clicks and clacks have disappeared. And I’m pretty sure I’ll no longer be wearing out the soles of my shoes on steep descents.  With all that TLC from Gravity Sports, I’m counting on the Koga to get me down the Great Divide Trail (our big summer ride) just fine.

Following in the tracks of Lewis and Clark

But I digress.  Mid-afternoon we made the final push over Lolo Pass and into Idaho.  Passes are always cause for celebration. No matter how many you’ve conquered, the thrill of a fast descent never diminishes.

Now came the fun part–cruising alongside the lovely Lochsa River as it snakes its way through the pristine terrain.   The area is heavily forested and extremely popular with fisherman and campers.  Historical markers describing the travels of Lewis and Clark and early Native American and pioneer settlements offer insights into the past. 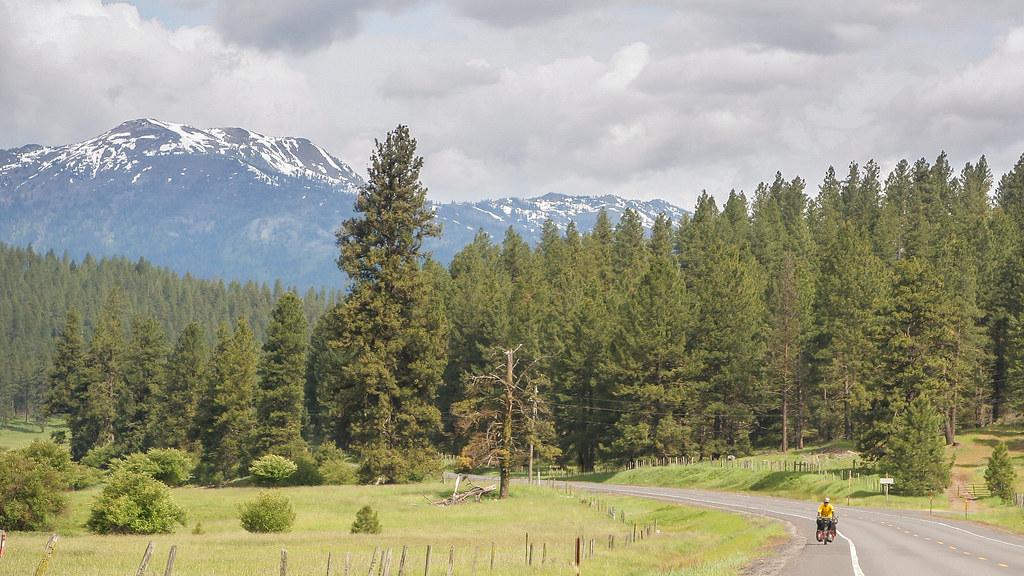 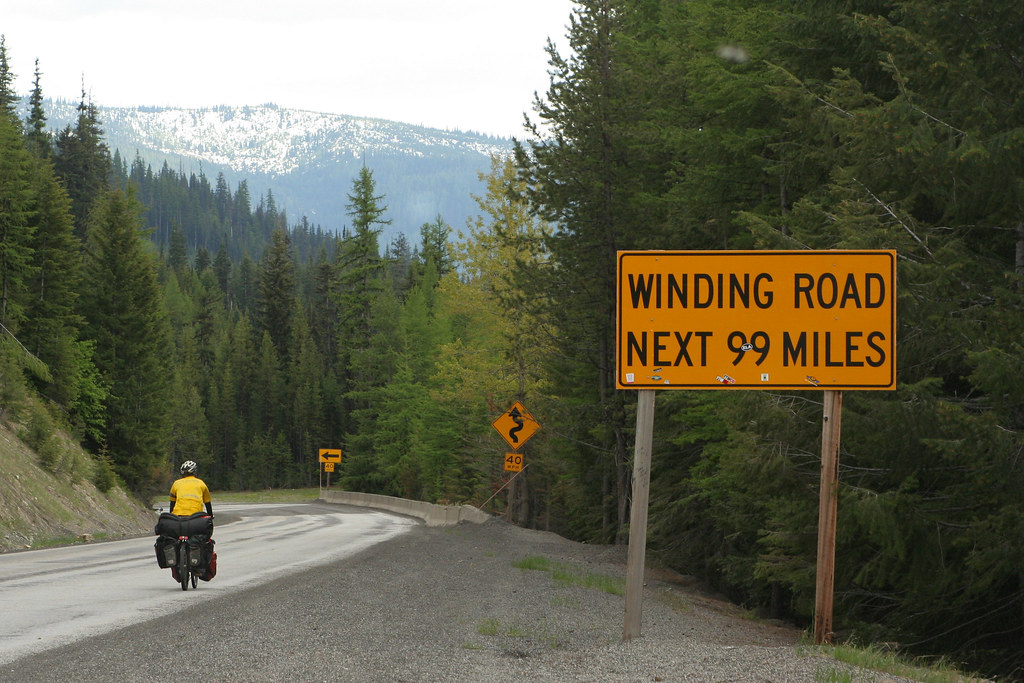 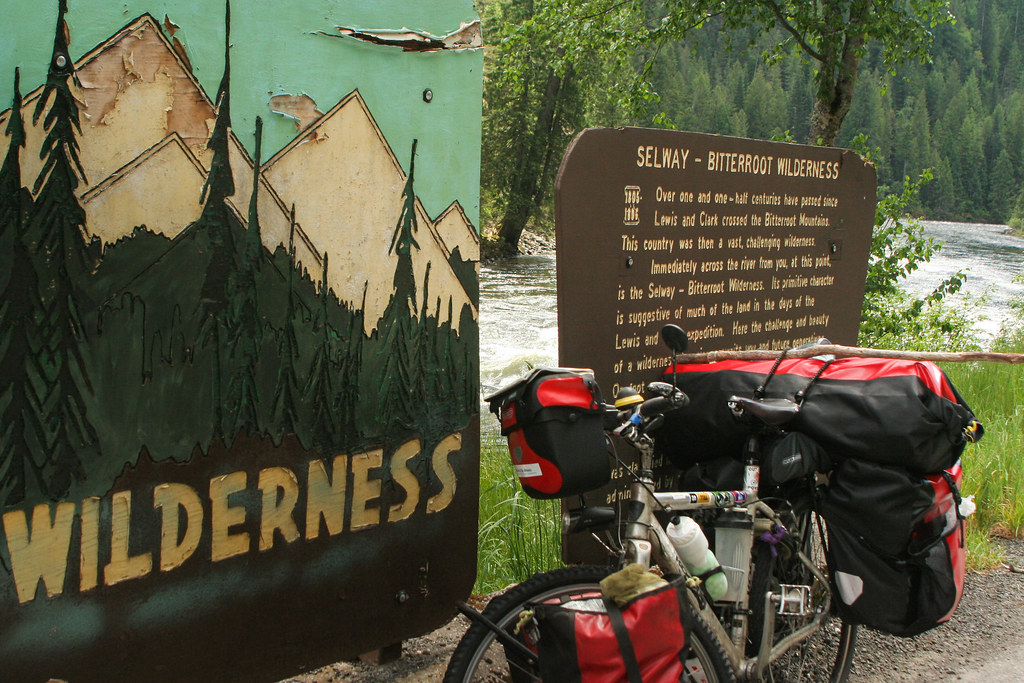 Serpentine Highway 12 is considered a highly dangerous ride by many.  It’s true you do have to share the road with massive logging trucks and a fair number of grey-haired RVers.  And there’s no shoulder to speak of.  But having recently navigated Iran’s treacherous highways, we found  America’s roads reassuringly safe.

Homes are fronted by tidy lawns and flying the American flag is the patriotic thing to do. Real Americana.  Locals are friendly and drivers mostly considerate.  Folks are used to two-wheeled travelers and stop to chat about road and weather conditions and offer tips about free camping in the city park.

It’s a good life and a good place for a cyclist.

Ortlieb and OrtliebUSA for kitting us out with new Backroller Plus Panniers.  These are the largest waterproof bike panniers in the world plus they come with a handy side pocket.  Perfect for bicycle travelers like us on multi-year tours. 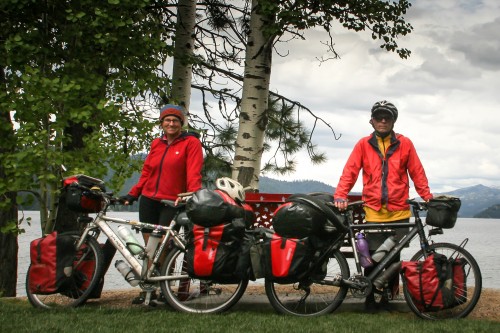 Petzl for setting us up with rechargeable headlamps that we can power up via a USB cable. 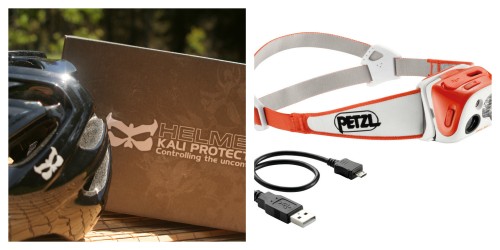 Back in the USA- bicycle touring in Montana and Idaho

Bicycle Touring in the Indian Himalaya: Spiti and Lahoul Valleys

The high Himalaya looms large in cyclists’ lore.  Over the years we’ve been privy to plenty of tales of ferocious...