As much as India infuriates me, there’s no denying the country lives up to its catchy marketing slogan: Incredible India.

Where else on earth can you find elephants loping down the highway?

Nobody (except for silly foreign tourists) bats an eye.  This is NORMAL.  Of course you share the roads with elephants.   And sacred cows, scruffy dogs, playful goats and dim-witted water buffalo.  This is India.  Anything goes.

Elephants on highways don’t merit a second glance, but foreigners on fully-loaded bikes? That’s exciting.  One evening in a grubby trading town in Assam we ended up spending the night at the local wedding hall.  It was a shabby room above a Chinese restaurant littered with empty beer bottles.  Naturally, a crowd gathered to watch us pitch the tent indoors.  We went through our usual spiel showing off the nifty self-inflating mattresses and impressive high tech travel pillows.  After we obligingly posed for photos, the last onlookers shuffled out the door.  Peace and quiet at last.

Eric scuttled down the hall for a bucket bath.  I set out clearing away the beer bottles in an attempt to improve the depressing décor.

Not, not a gun.  Just insistent rapping on the door.

“I am a teacher, madam, please open the door,” came the reply in a polite, refined voice.

I relented and in marched a dozen or so of the town’s most distinguished citizens.  How on earth had word of our arrival gotten out so quickly?

The entourage had come bearing gifts: two traditional embroidered shawls.  Immediately I regretted my rudeness.  Fatigue was no excuse for bad manners.

The mayor was there, as well as a couple of photographers with quite professional looking gear and someone who introduced himself as a journalist.

Eric was in for a real surprise when he sauntered back to the room smelling of soap and shampoo.  For an hour or so, we fielded questions and plastered on fake smiles for photo shoots with the dignitaries.  Finally the thrill wore off and they departed, assuring us the whole crew would be back bright and early the following morning to see us off.

“Great, see you then,” I cooed as the last one slipped out of the wedding hall.

In spite of the steamy climate, India is not a country of early birds.  In cities, some shops don’t open till 10 or even 11 AM.  We were planning a 6 AM start and I was fairly certain our new friends would all be at home enjoying a snooze.

How wrong I was.

The following morning they were back.  This time with a camera crew from the local TV station in tow.

The interviewer was a nervous chap who read off a series of important-sounding  questions.   We were even  required to comment on a recent case involving the killing of an endangered white rhinoceros.  “Simply appalling,” I spat out like a talk show pundit.  “This is a national disgrace and it is imperative that India crack down on poachers and strictly enforce environmental protection laws.”  The interviewer beamed.

Word had gotten out in surrounding villages had heard about us and the morning was filled with photo requests and even a few scribbled autographs.

I’ve never been enthralled by stardom.  Our five minutes of fame in Assam only reinforced my desire to remain ordinary and anonymous.

Experiencing the ordinary is actually what’s most appealing about bike travel.  Cycling is the perfect way to watch humanity at work and at play.    I love it.  Witnessing life’s daily struggles and small joys from the privileged vantage point of a cycle saddle never grows dull.

Most Indians still survive by the sweat of their brow.  Men pass their days herding sheep, goats or cows.  They wrestle with ornery water buffalo as they plow their fields.  Under an unforgiving sun, they dig ditches and plant rice.  In towns and cities, emaciated old men pedal cycle rickshaws chock-full with wares or plump citizens from the middle class.

Children in crisp uniforms, girls with their hair neatly braided or in bows, can be seen trotting off to school.  Late afternoons it’s finally time to relax with a spirited game of cricket.

In India, life is lived outdoors and there’s always something to feed your senses.

Try as we do, it’s impossible to hit the seasons just right all the time.  By April, the monsoon menace begins.  The storms roll in at a ferocious speed and rain can pound down for hours.  Then suddenly it’s all over.  Clouds clear and steam begins rising from the road as the sun peeks out.  For a few glorious moments, the whole world is refreshed and rejuvenated and we pedal in perfect harmony. 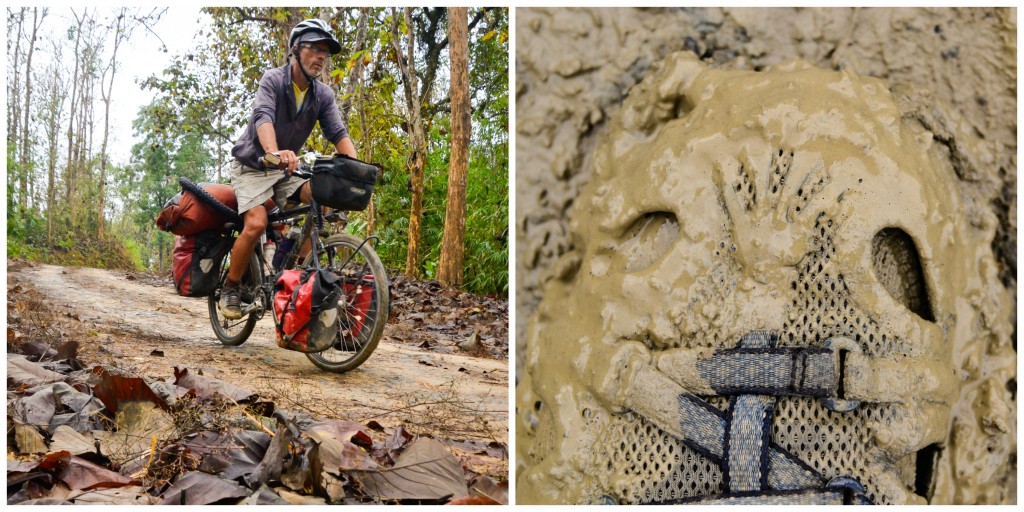 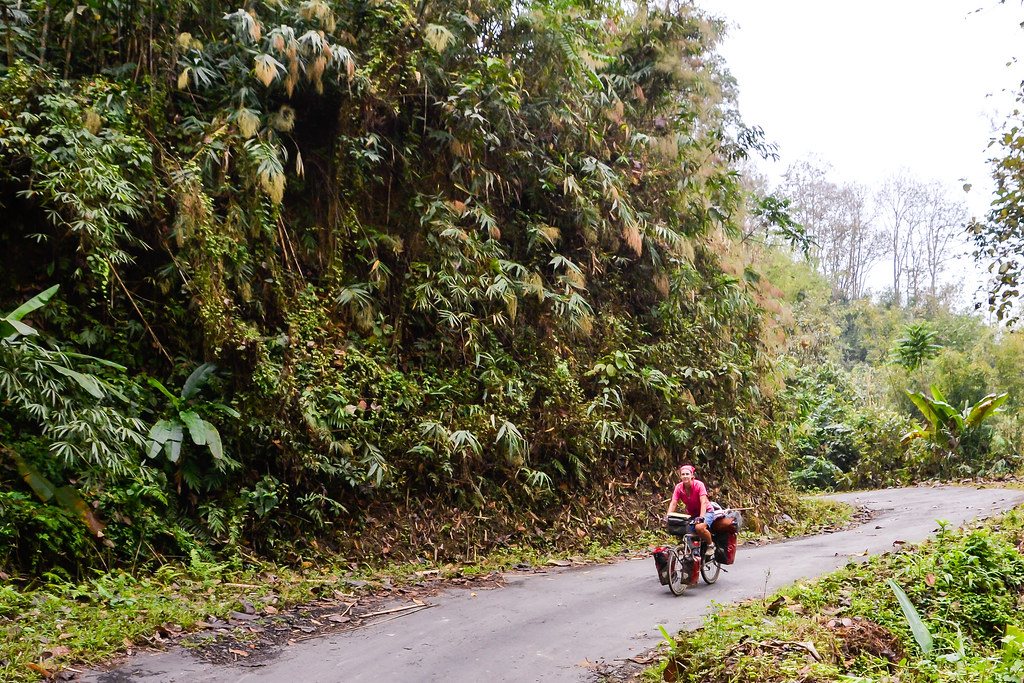 Now that we’ve teched -up with a GPS and smart phone, getting lost is mostly a thing of the past. Since you can almost always find somebody who speaks English, it’s extra difficult to lose your way in India.

Suceeding at the almost impossible

In spite of this, we somehow managed to cycle 30 kilometers on a dead end road through the mountains of Mizoram. We’d have gone further if a storm hadn’t rolled in.

The remote village in which we found ourselves was just a cluster of homes stretched out along the road.  In one little hut somebody hawked biscuits, batteries and betel, but that was about it.  No market. No restaurant. And certainly no hotel.

Fortunately the village school teacher offered us shelter in his simple home.   The teacher’s home was by far the most luxurious structure in the village.  The dwelling was made of sturdy wooden planks rather than metal sheets, mud or bamboo.  There was a main room furnished with three plastic chairs and a low table plus a smaller room with a bed.  The toilet and cooking area were below.

Water had to be fetched from a pump out back and the family’s only electricity source was a small Chinese-made solar panel.  This provided just enough power to charge a mobile phone and a tiny lamp.  The entire village was off the grid, though there was one solar powered street lamp.  If the government followed through on their promises, the entire village would be connected to the electrical grid by 2017.

The teacher and his wife had just two children, but had taken in various cousins from poorer and even more remote villages.  The home was always bustling with activity.   In an effort to carve out a slice of privacy, we pitched the tent in the front room.

Neighbors darted in and out, sneaking a peek at the exotic visitors on bikes.  They’d never had a foreigner in their village before.  Never even seen one pass by in a bus.  Naturally, we piqued their curiosity.

The village was made up entirely of people from the Bru tribe (also referred to as Reang). Later we would learn that the Bru were universally distrusted by the majority Mizo people.  In 1996 and 2009, violent conflict broke out and most of the Bru fled to neighboring Tripura State where they were shuttled into camps and awarded the status of ‘refugees.’  These clashes led to the creation of the Bru National Liberation Front, a terrorist organization that occasionally stirs up trouble.  The latest episode was the kidnapping of a telecom executive and his driver last November.  The incident took place near Mamit, not far from the Bru village where we spent the night.

At the time of our visit, we knew nothing of this instability. Guidebooks portray Mizoram as an island of peace in the volatile northeast.  For anyone planning to tour in the area, we advise sticking to the main roads.

Daily storms had become the norm now and the hills were a lovely emerald green and lush with fresh vegetation.  The rough and rocky roads in Mizoram were slippery after heavy rain and I took more than one nasty spill on a steep descent.   On Good Friday we arrived at the broad river that separates Mizoram from Tripura.  A line of trucks was backed up for several miles.  The bridge was down.  A temporary bamboo bridge had been constructed so that pedestrians could cross, but that had washed away in the previous day’s storm.  It appeared we were stranded, unable to cross.

The bridge’s main structural framing was still intact but half of its planks were missing.   A few brave men inched their way across the skeletal structure.   Attempting the same feat with bikes and bags would surely result in dire consequences.

Locals thought the bridge might be repaired my Monday or Tuesday of the following week.  Mizoram is 90% Christian and everything would be shut down until after Easter.

That didn’t sit well with us.  We began grumbling loudly and bickering with each other.  Quickly a crowd formed to see what the ruckus was about.  I’m afraid we weren’t being very good ambassadors for the West.  We were annoyed, and showing it.

Nobody else appeared perturbed by the inconvenience of the broken bridge.  They accepted the situation without complaint.

Foreigners in a funk

After so many years on the road, you’d think we’d have acquired the same equanimity.  Instead, we got all riled up and railed on about inefficiency and the ridiculousness of the situation.

Finally, a gentleman stepped forward and promised he’d see the bridge was repaired before lunch.

Fat chance, I thought.  The guy had a disheveled appearance and didn’t strike me as someone having the power or authority to get things done.

How wrong I was. Within half an hour a crew of laborers had been assembled and metal planks were being bolted down.  By noon, we were on the other side of the river sitting down to lunch in Tripura.

How is this possible?

The express bridge repairs boggled my mind. If we hadn’t shown up would the bridge have remained in disrepair?   What had prompted them to work so fast?  Were they just trying to placate two disgruntled foreign tourists?  Had the mysterious man concocted some story to get things moving?

I’ll never know the answers.  All I know is that a random road angel swept in and solved our busted bridge predicament on Good Friday 2015.

It’s not the first time a total stranger has come to our rescue.  Far  from it.  From Northeast India to Nigeria, Nicaragua to New Zealand, people across the planet have lent us a helping hand.   For this, we are deeply grateful.

Perhaps a  more truthful slogan would be India: infuriating and incredible!

India.  Chaos and confusion, filth and frustration diluted by a dash of unbelievable beauty.  There exists no country on earth...