As a touring destination, Bangladesh ranks up there with backwaters like Brunei and Burundi.   The cyclists who do trickle into the country are usually on multi-year tours.

With so few two-wheeled tourists, the country is something of an unknown quantity.

I knew that Bangladesh is incredibly crowded, and that was about it.    With a little research, I learned Bangladesh has the highest population density of any country in the world (barring tiny city-states like Singapore and Monaco).

As you might imagine, this knowledge didn’t exactly enamor me to the idea of a big bike ride across Bangladesh.

And then I got an email from Grace Johnson of Bicycle Traveler magazine fame.  Here’s how she responded  when I mentioned we were heading to Bangladesh:

I’m jealous that you will be going through Bangladesh, we loved it there!

LOVED touring Bangladesh?  That came as a surprise.

Turns out Grace had good reason to be so smitten with Bangladesh.  The country, we were soon to discover, has much to offer for the intrepid tourist.

It’s not always an easy destination, but one that is infinitely rewarding.

Here’s what we’ve learned about bike touring in Bangladesh:

Roll across the border into Bangladesh and incredible you (hitherto just a smelly foreigner on a bike) will be instantly elevated to star status.  Crowds gather, pictures are snapped and you’ll even receive the occasional request for an autograph.

Anonymity is impossible.  Nothing (not even touring in remote parts of Africa) can prepare you for the attention you will attract in Bangladesh.  It is simply mind-boggling.

Many cyclists find the attention factor difficult to deal with.  While it may feel flattering at first, the constant watching will undoubtedly grow tiresome by day two of your Bangladesh tour.

What to do?  Accept the situation.  Why try to figure out what’s so fascinating about scruffy foreigners in dirty clothing?  Foreign tourists are rare in Bangladesh and your very presence is cause for much excitement.  Enjoy!

Naturally, you will be obliged to answer all the usual questions regarding your nationality, mission, age, marital status and number of offspring.  In some countries, that’s where it stops.  But in Bangladesh, people are truly interested in you and why on earth you’ve decided to visit their often overlooked country.  They want to know more!

In rural areas not everyone speaks English, so communication can be hampered.  After the basic questions have been exhausted, locals will stare, and you’ll grow increasingly uncomfortable.

Then someone will have the bright idea to scramble off and fetch the village English teacher.     He’ll come bounding up, breathless with excitement and exertion.  Finally, he can practice the language he has spent so much time learning with honest-to-goodness foreigners!

Talking with the teacher will be much nicer than having the same six question repeatedly lobbed at you from all sides.   With the teacher as translator, you can even crack jokes and move on to more fulfilling conversation.

Bangladeshis are generally kind, hospitable and very helpful.  They will gladly escort you to a restaurant or hotel and even help you carry your heavy panniers up the narrow stairway to the 5th floor.  Nobody will try to charge you double for a meal or play any dirty traveler’s tricks.  You’ll be invited in for tea and treated as an honored guest.

Not a Hill in Sight.

Most of Bangladesh is mercifully flat and the pedaling couldn’t be easier.  This is one place where you won’t ever have to suffer as you cycle.   In the northern tea garden areas around Sylhet there are few gentle inclines but that’s about it.

Some realities just can’t be sugar-coated.  Cities are mostly crowded and chaotic with the smell of rotting rubbish and overflowing sewers permeating the air.  The crushing mass of humanity can feel oppressive and overwhelming, particularly if you’re cycling in the pre-monsoon heat.    Only at the crack of dawn does a semblance of calm prevail.

Those who enjoy hustle and bustle might have another opinion.  Maybe they’d describe Bangladeshi cities as lively and invigorating.

Bangladeshi cities may be grubby, but there’s no denying they provide tremendous opportunities for street photography.  In this colorful country where life is lived in the open, there’s a photo to be made everywhere you turn.  What’s more, people love to be photographed!  Their smiles light up when you show them the LCD display and they often thank you profusely for having taken their photo.

Alright, so maybe this one doesn’t come as such a surprise.  For the past 23 years, the country has been rule by female prime ministers, but women still take a backseat to men in Bangladesh.

Women are rarely seen working outside the home.  Market stalls, shops, hotels and restaurants are all staffed exclusively by men.  Women, of course, do venture outside the home.  They shop, they accompany their children to school, they visit family and friends, and occasionally women can be seen dining in more upscale restaurants.  But you won’t find women having meals in the cheap roadside eateries favored by budget bike tourists.

Bangladeshi men always showed me the utter most kindness and respect, even when I set out alone to wander the streets in search of photographs.  Nevertheless, I felt some unease with the skewed gender balance in public places.

In neighboring India, cars are taking over.   But in Bangladesh, it’s still the humble rickshaw that rules the roads.  Whether it’s a major highway, a country lane, or a congested thoroughfare, you’ll spot squads of rail-thin men straining to pedal brightly painted rickshaws bursting with goods or portly members of the middle class.

Ever imagine being caught up in a rickshaw traffic jam?  They’re unavoidable in Bangladesh as the rickshaws vie for space on choked-up roads.  Being stuck in traffic is all part of the fun. 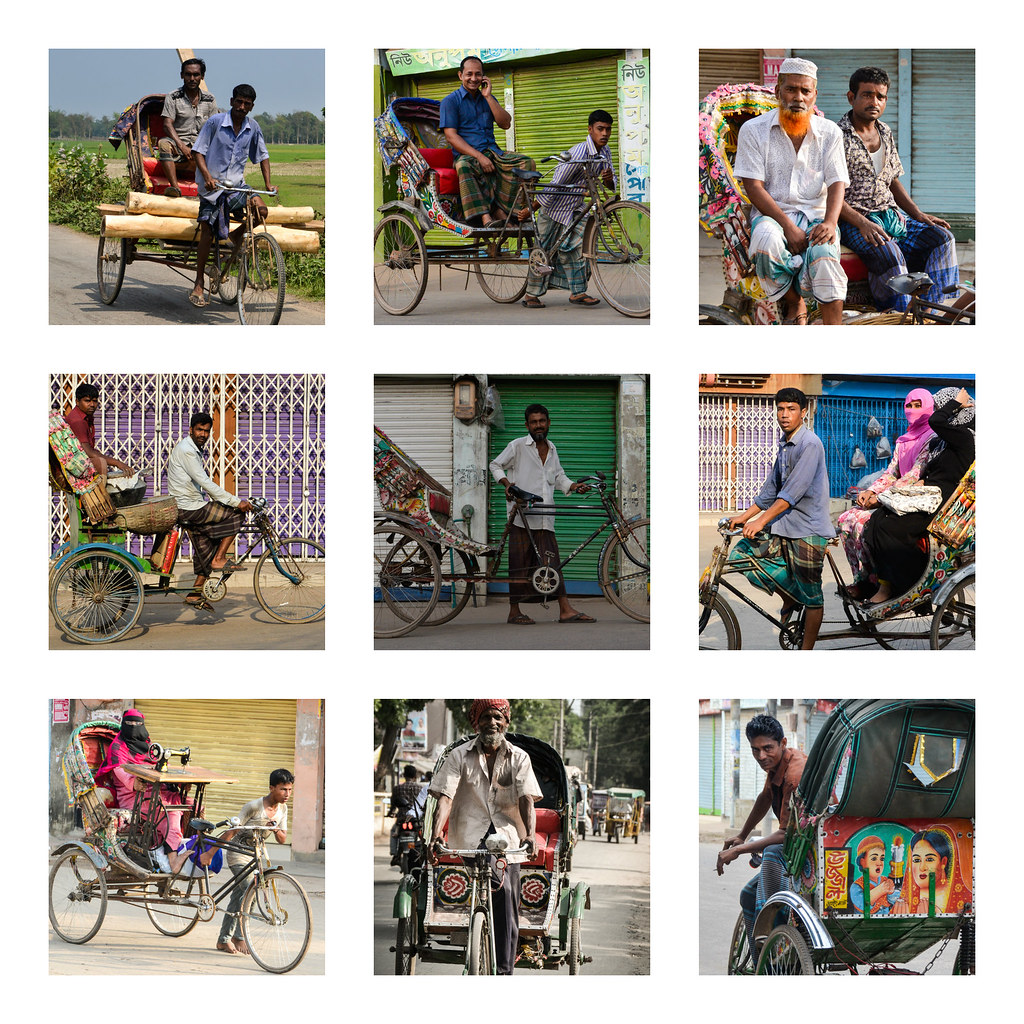 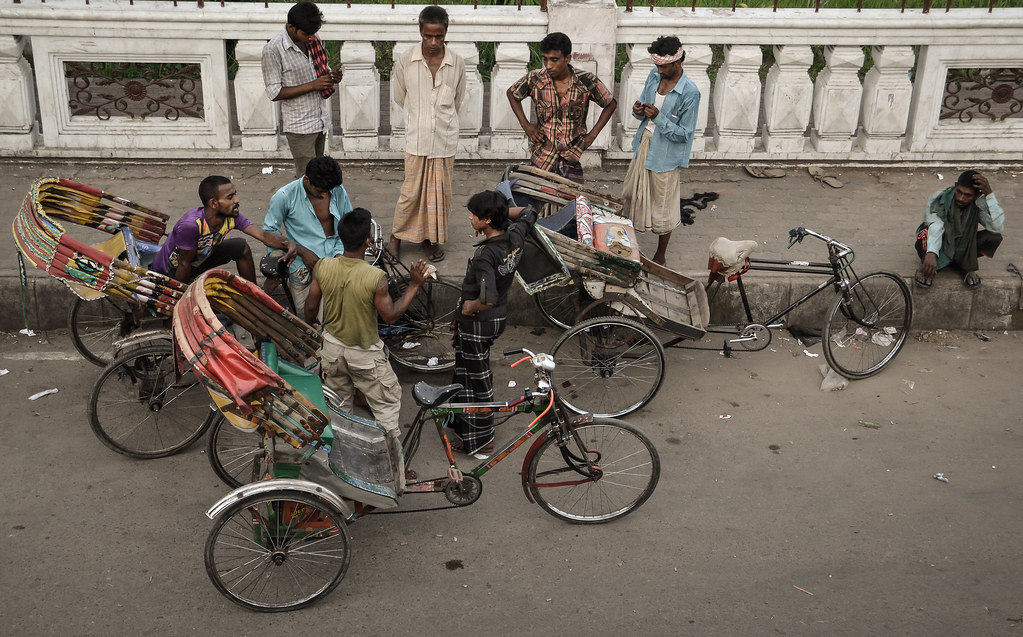 Some of the Best Rural Riding in Asia.

Can she really mean that?  Yes, absolutely, I do!

Rural Bangladesh is gorgeous!  And accessible.  An astounding number of beautiful byways link up villages.  Zipping down the shady lanes past the traditional mud-brick homes with tidy garden plots out front is simply delightful.

Bangladesh’s cities and towns may be some of the worst cesspools in the developing world, but its villages are amongst the cleanest and most pleasant you’ll come across anywhere.

The very best cycling we found in Bangladesh was on the so-called border road, way up north along the frontier with India.  This is a predominately tribal area and you’ll spot more churches than mosques.

It’s a Wild West sort of place, with rickety bamboo bridges, flooded roads and the occasional precarious river crossing on a decrepit boat. 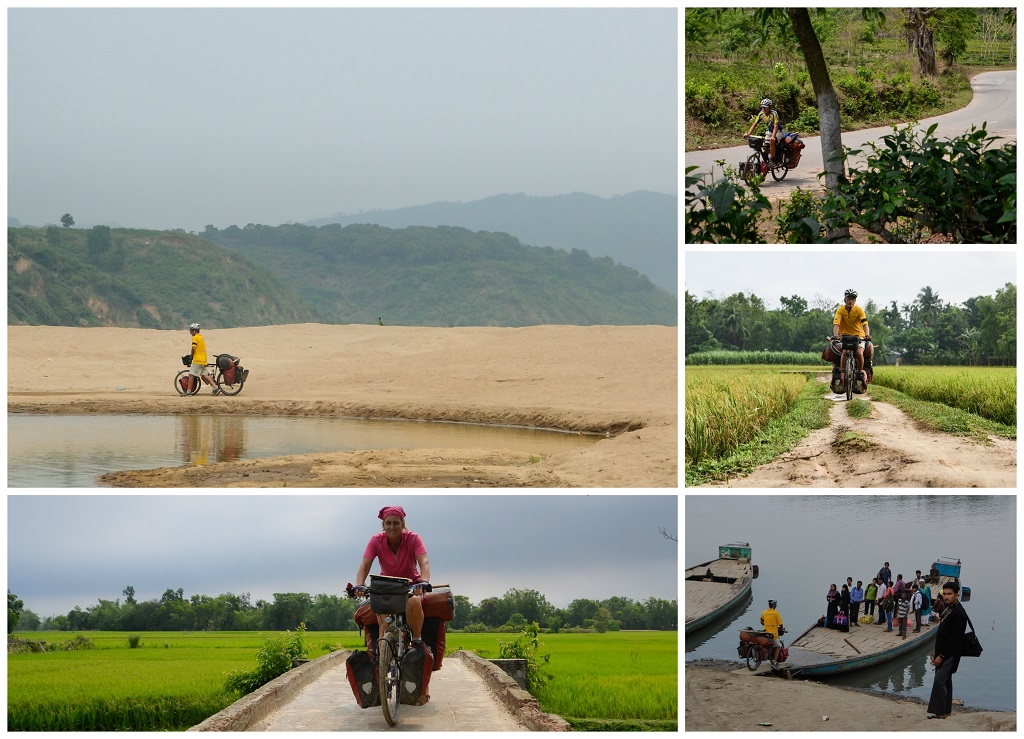 The Time is Now!

As a cycling destination, Bangladesh has immense potential.  Find out for yourself, before Lonely Planet catches on and touts Bangladesh as one of the Hot Spots for 2016!

We were NOT able to get a Bangladesh visa on arrival at the Dauki crossing in Meghalaya, India.  We had to go to Argatala and apply at the consulate for visas.  This was a two day process and cost 2,500 rupees for a 30 day visa.

9 Things to Know about Bike Touring in Bangladesh

As much as India infuriates me, there’s no denying the country lives up to its catchy marketing slogan: Incredible India....