India.  Chaos and confusion, filth and frustration diluted by a dash of unbelievable beauty.  There exists no country on earth so thoroughly maddening, yet so undeniably captivating.

All told, we’ve travelled to India on six separate occasions. As wide-eyed backpackers we bounced around the country in the late 90’s.  In the early 2000’s we escaped Europe’s harsh winters and hectic holiday season to spend Christmas in the hill stations of south India. In 2008, we took a 6 month break from cycling Africa and rode a loop around the southern states of Tamil Nadu, Kerala, Pondicherry, and Karnataka.

India, we presumed, would not shock us.  We’d witnessed beggars with mangled limbs eeking out a living on the streets, dreadlocked sadhus with scruffy beards and colorfully painted faces wandering the country, masses of impatient pilgrims pushing towards holy sites, cows bringing traffic to a halt on busy thoroughfares, shabby streets littered with waste, clusters of villagers defecating in the sea, toddlers at play teetering atop piles of rubbish.    We thought we knew India fairly well.

Rolling over the border from tranquil Myanmar into the Indian state of Manipur, we were greeted by sniffer dogs, masked military men behind big guns and army helicopters swarming overhead

Turns out we’d grossly underestimated the subcontinent’s ability to shock and surprise. 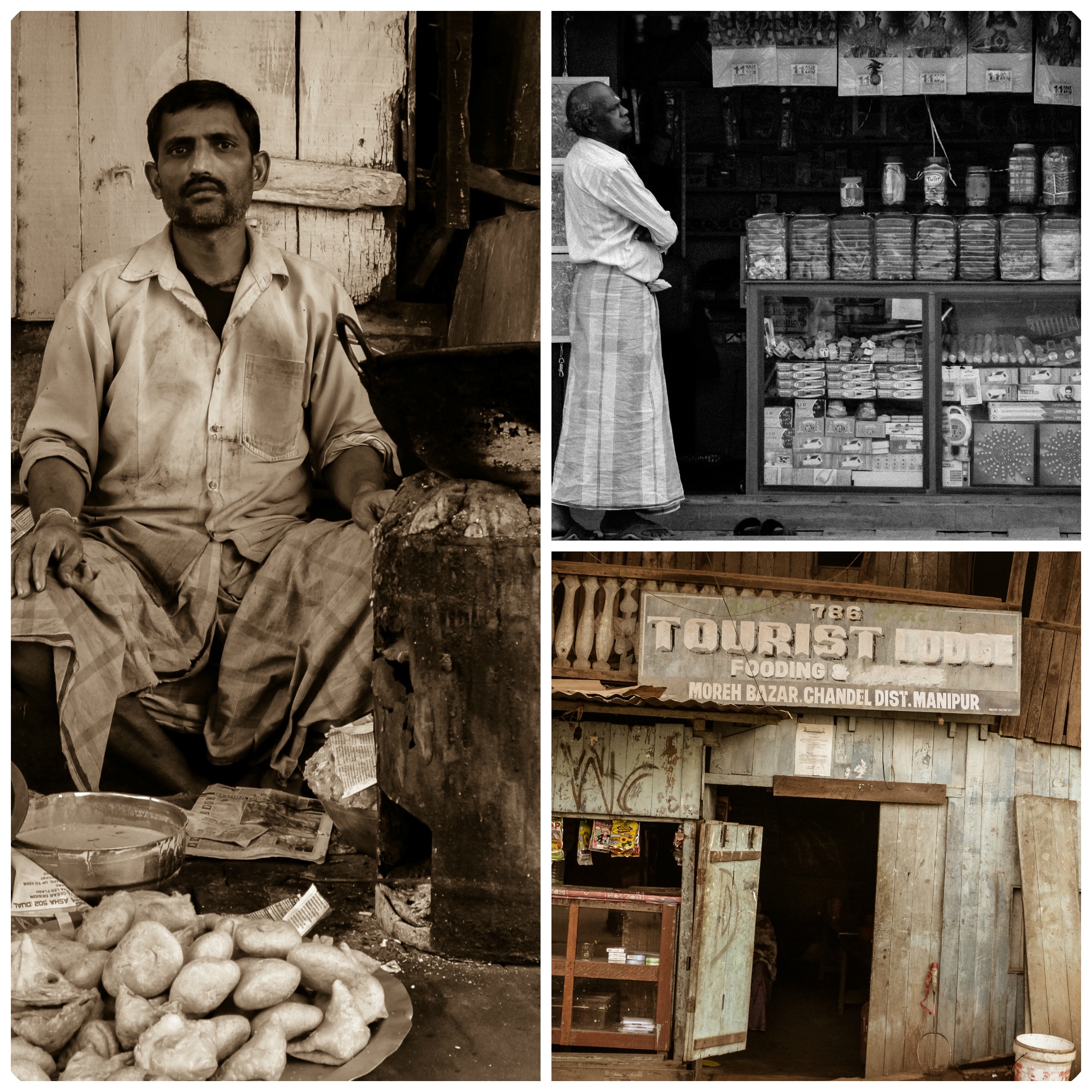 India’s troubled northeast is a world away from tourist hotspots like Goa, Hampi or Agra.  Locals in the northeast refer to the rest of India as The Mainland.  Given that 90% of the northeast’s entire border area is with foreign countries and the region is only connected to the rest of India by the narrow Siliguri Corridor, this actually makes sense.  To northeasterners, Mainland India is just a foreign a place as Myanmar or China.

The northeast was tacked on to the rest of India rather late and many people we met didn’t particularly embrace the Indian identity.  They saw themselves as Naga or Manipuri or as members of any one of the dozens of tribal groups that inhabit the region. Armed struggle for independence has been taking place for decades.  To make matters even worse, the region also suffers from violent inter-tribal conflict.   In some parts of the northeast, headhunting was once widespread.  Nowadays tribes prefer to arm themselves with the ubiquitous AK-47.

Insurgent activity coupled with sundry revenge killings, extortion and kidnapping meant the entire region was pretty much off limits to foreign tourists until just a couple of years back.

Massive military intervention from the central government has brought a measure of calm to the region.  A few years back, government officials deemed the northeast safe enough for tourism.   Visitors from abroad (adventure-seeking cyclists for the most part) are slowly trickling in.

So here’s the deal:  Underground movements have been largely snuffed out in the states of Tripura, Assam and Meghalaya.  Manipur and Nagaland remain dodgy.

As long as we stuck to the main roads, locals assured us, we could travel safely throughout the region. Militants target government officials, they claimed, not foreign tourists.  How comforting.

Moreh, in Manipur state, was our first stop.  Like all cyclists who pass that way, we checked in to the friendly Sangai Hotel, owned and managed by the ever helpful and extremely kind R.K.

200 rupees (about $3) got us a tidy room with twin beds and access to a smelly shared toilet and cold water bucket bathing facilities at the end of the hall.

Just knowing the police wouldn’t rap on the door and insist we relocate to ‘approved tourist lodgings’ filled us with delight.  Don’t get me wrong.  We LOVED Myanmar.  But being under the thumb of the authorities constantly weighed on us.  India was loud and grimy, but at least we were free to move about as we pleased.   Long live democracy!

Is this really India?

Indian food almost tops the list of our favorite cuisines.  We’d been dreaming of masala dosas for breakfast, thali for lunch, tasty north Indian curries for dinner plus plenty of rest stops to indulge in savory samosas and overly-sweet chai.

Along with Harold and Karin, two Dutch cyclists who’d also just crossed the border from Myanmar, we set out in search of lunch.

Stepping out of our little cocoon at the Sangai Lodge slapped us with another minor shock.    Moreh was awash with local police and soldiers from the Assam Rifles “Friends of the Hill People” regiment.  Sirens blared as military vehicles charged down the congested main road.  Locals went about their business haggling in the market, loitering in roadside tea shops and carting goods hither and fro.  Nobody, it appeared, was alarmed by the presence so many menacing men in uniform.

The place appeared to be on the brink of war, but we went about our business away, hunting down some fine Indian food.  Hunger trumps safety.  To our great surprise, Moreh’s dining establishments were mostly dusty, dimly lit affairs entirely devoid of clientele.  Odd for high noon on a Saturday in a bustling border town.

We four ravenous cyclists ended up in a scruffy joint that served up cold curry and bony fish on a bed of over-cooked rice.  Possibly the worst meal we’ve EVER endured in India.  We quickly learned that bad food is not an anomaly in the northeast.  A patchwork of tribal groups makes up most of the highland population.  Their cuisine is based mostly on simple boiled vegetables and whatever small game they can shoot plus birds taken out by sling-shot.  Forget about delicate spices and subtle aromas.  Even chapattis are hard to come by.  The staple dish in restaurants is CHOW MEIN (really just some soggy noodles topped with a bit of cabbage, possibly half a shredded carrot and a smattering of ketchup!).

Desperate for a chow mein reprieve, we later resorted to firing up the MSR and preparing our own tasty curry.  Imagine that.  Not being able to track down a decent meal in INDIA of all places.  Truly depressing.

Due to a lingering cold Eric acquired in Myanmar, we ended up hanging around Moreh for a couple of days.  As with all border towns, Moreh is home to a cast of shady characters.  There are drug smugglers and prostitutes, arms dealers and insurgents.  Not the kind of town where you’d want to be walking the streets after, say, 8 or 9 PM.

The road out of Moreh towards the state capital of Imphal rises steeply.  So steep, in fact, that in one spot a tow truck waits to haul overloaded vehicles over the climb.  After just 40 kilometers and around 1,300 meters of ascent, we called it quits for the day.  The owner of a tea stall rented us a room for the evening and we gave our aching legs a rest.

The mountains rarely let up in the northeast.  The elevation ranges between 1,000 and 2,000 meters so you’re never too high, but all the ups and downs are fierce.

Roads can be potholed and rough or silky smooth, but traffic in the highland areas is generally delightfully light.  Only when we swooped down to the plains would we be hit the chaos and congestion so typical of India.

After a few days in the northeast we got accustomed to the checkpoints, big guns and military convoys.  Security didn’t worry us most of the time, but we did encounter a handful of anxiety-inducing situations.

The first scary event occurred less than a week after crossing the border.  While strolling through Imphal’s main market, Eric was startled by a big blast.  It was a BOMB!    Just a small one though.  Three injuries, no deaths.   Locals remained calm.   It was, they explained, an ‘everyday occurrence.’

No cause for alarm.    The mess was cleaned up and the shopping carried on.

From Imphal we took a less travelled road up to the hill station at Ukruhl.  For the first 30 kilometers or so, heavily-armed soldiers were stationed in the fields adjoining the road at short 500 meter intervals.  It was an edgy and uncomfortable situation, made all the worse by the fact that I was desperate to attend to nature’s call.   Impossible to dash behind a tree without being tracked by half a dozen twitchy soldiers.

Of what great importance could fallow fields be in a military conflict?  Later we learned that stretch of road is a popular spot for IEDs and ambushes.  Ukhrul itself shuts down at dusk due to a curfew imposed by the military.  Not exactly the stuff to brag about in glossy tourist brochures.

Our most disturbing experience came in Nagaland’s Tuensang District.  Recent tribal clashes had left 20 dead (including one policeman).  Reserve troops and village guards had been dispatched to restore peace while tribal leaders negotiated.  Roads were deserted as it was too dangerous for villagers to set foot out of areas not controlled by their own tribe.  Food and other essentials were being hauled in by convoys with military escort.  Sounds dangerous, doesn’t it?  Not the sort of spot that tops lists of super cycling destinations.

I was ready to turn back.   Why risk ending up as collateral damage during tribal warfare?

Eric disagreed.  “It’s just between those tribes,” he rationalized.  “Nobody will give a damn about two tourists on bikes.”

Time for a second opinion

I was ready for a second, third and fourth opinion before riding wide-eyed into the war zone.  Sure, I’m prepared to take calculated risks.  You have to be if you want to cycle around the world. But I’m not ready to jump into perilous situations in the name of adventure.

Church officials insisted we’d be safe.  The military commander said no harm would befall us.  The clever looking main running the tea shop swore there would be no danger.

I was suitably convinced.  We pedaled to Tuensang.  The road was ours.  We crossed paths with three military vehicles and that was it.

Fields were empty and an eerie silence prevailed in the rugged countryside.  When we rolled into villages, heads turned and folks looked on in awed silence.  In one village half the huts had been burned to the ground.  Soldiers sat around playing cards while dogs roamed about aimlessly in search of their departed masters.  It was a grim day in the saddle.

The city of Tuensang, once a thriving commercial hub, had been placed under 24-hour curfew.  Shops remained shuttered, schools were closed and no one was allowed to move about in groups larger than three.  We had no reason to linger.

As we pushed on past Tuensang back into the hills, the situation slowly returned to normal.  Men could be seen returning from hunting, women trotted along burdened by heavy loads of firewood and village shops were open for business.

Touring these remote parts of the northeast has been a struggle.  But it’s been worth it.   We’ve gotten a glimpse of one of the least-visited areas of India, perhaps of the entire Asian continent.  What we’ve seen hasn’t always been pretty, but it’s left a lasting impression. 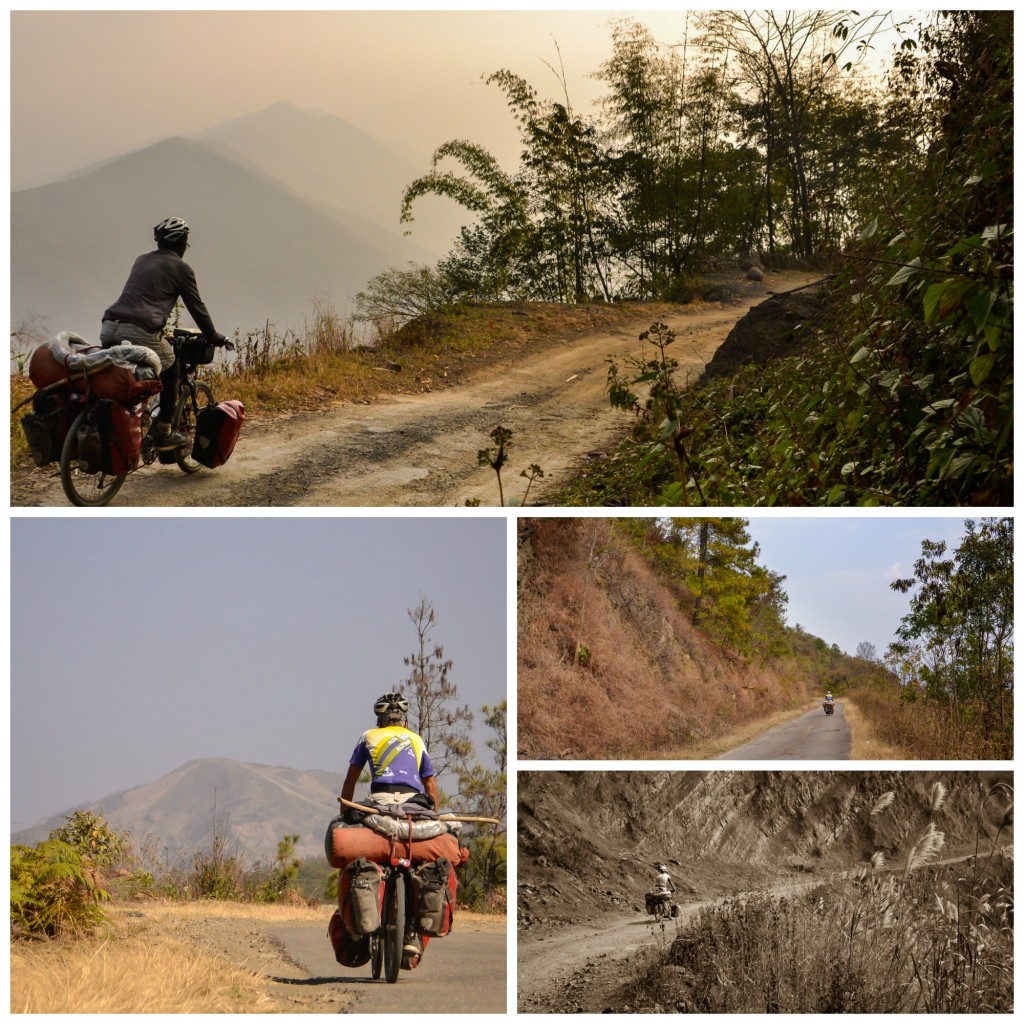 10 thoughts on “Not the India you Know”

There he was again.  His bright red Adidas baseball cap giving him away.  It was an unfortunate choice in attire...