A Bicycle Touring Break in Seoul

Hub repaired, wheel rebuilt, well-rested and a few kilos heavier, we hopped on the Han River cycle path and headed for the countryside.  I’d taken in my final glorious Seoul sunset and a tinge of sadness swept over me as the city faded into the distance.

Seoul had been home for two weeks.  And that’s a long time for us to stay put.  Time enough to settle into routines.  To relax, to let go of the subtle stresses of finding water, the next meal and a safe place to sleep.

A routine, every now and then, is grounding.  It’s reassuring and comfortable.  And quite necessary, I’d argue, if you’re in non-stop movement for months on end.

Our Seoul routines were simple.  We didn’t busy ourselves with tourist attractions from dawn till dusk.   A walk up to Namsan Tower for sunrise started the day.  It was a moment of solitude and time to appreciate nature right in the heart of the city.

My path never deviated.   After two weeks of tracing the same trail, I could pick out which dogs would leap at me, wagging their tails in hope of attention and those that would snarl and let out a yelp spotting me as an imposter.  My fellow walkers (all retirees– the rest of the population is too busy building a career or getting educated for leisure in the AM) nodded in recognition as we passed.  It felt good  to be one of the gang of early morning fitness nuts.

Next came breakfast with our couchsurfing host, Jin Bu.  We’d stuff ourselves with pancakes or French toast and then balance that with some healthier Asian fare.  The days were filled with errands—arranging spare parts and parcels, repairing holes in the panniers and giving our much-loved tent a little TLC.  Soon it was time for another hike up to Namsan for the sunset—now the path was filled with tourists chatting in a multitude of languages and snapping photos of each other with the capital spread out beneath them.  US Army personnel from the nearby Yongsan base jogged in formation and young couples strolled hand in hand.

After a leisurely dinner there was time to catch up on reading and then call it a day.  Our hard-working couchsurfing host generally returned from her busy day at the office well after I’d gone to bed.  Koreans are nothing if not industrious.   According to a 2008 ranking by the OECD, South Koreans work the longest hours per year, on average, of any developed country– 2,357 hours per year–that’s  six-and-a-half hours for every single day of their life.

Korea is moving forward at a frenetic pace.  At least in the cities.  The countryside is another world—and one, I might add, in which I feel much more at home.

Next up: Bicycle touring in the Philippines

We are back in Busan now, exactly where we began our tour two months back.  Tomorrow a Cebu Pacific flight will whisk us off to the Philippines.  I reckon we’ll be in for something like culture shock.

Check out our Ride Guide to Bicycle Touring in Korea 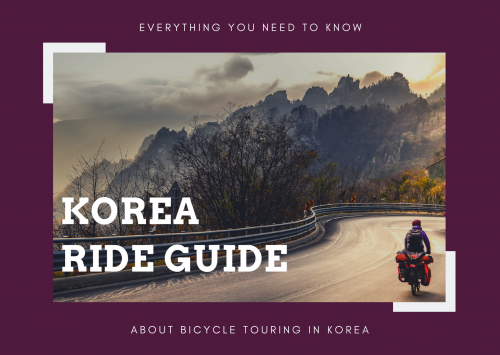 5 thoughts on “Rural Riding: the DMZ and beyond”

It was time to venture off the bike paths.  If we stuck to the official trails, we’d exit the country...