The beauty of travelling by bicycle is that one country gently flows into the next.  Crossing from Cambodia to Thailand, for example, you hardly register a change.  Sure, the roads are better in the former Siam and people have a little more money to spend.  Most Thais can afford a shiny Honda scooter while many  Cambodians still struggle on rickety bikes.

Early morning cycling Thailand means you’ll  be surrounded  by smiling kids in crisp uniforms ambling off to school.  In Cambodia, on the other hand, you’ll find many youths idling by the roadside, working alongside parents in the emerald rice paddies or busy minding a pack of younger siblings.

But the changes are not vast enough to be disconcerting or overwhelming.  The food is similar (though better on the Thai side), the languages closely related and the landscape, climate, and costs virtually the same.

Flying from Korea to the Philippines was a jolt. A jump from cool crisp days and cold nights to oppressive heat and humidity was just one of the many changes.   After spending the previous 14 months in the rich world (Australia, New Zealand, Japan and Korea) we were in for a few surprises.

Before we’d even made our way out of The Manila International Airport, we were struck by the friendliness and openness of Filipinos. Idle chit chat with two young women drumming up business for taxis revealed that motherhood was joyful but overwhelming.  One woman had four children; the other was already mother of 5.  The women’s workday was long (the night shift dragged on from 7PM to 7 AM) and pay was lousy (commission only).

They were on their feet 12 hours a day, and barely scraping by.  Still the women laughed and joked, revealing not an ounce of self-pity.

I’d have like to take them up on their services, but we were in no need of a taxi.  Our Warm Showers host ( a Korean expat) had arranged for a car to fetch us from the terminal.  That was a World Biking first (and probably last!)  This door to door service, I’ll easily admit, sure beats spending a rough night on the terminal floor.

Our driver, Aldrin, taught us a couple of things: First off, Filipinos work hard and complain little.  It was a Saturday night and well after midnight when our flight touched down in Manila, but Aldrin still greeted us with a big smile.  Sure, being pleasant is part of  his job.  But he could have just picked us up and tossed our bags in the SUV rather than making the extra effort to make us feel truly welcome in his country.

Later we discovered that Aldrin is actually a college graduate who studied engineering.  This brings me to the distressing fact that many Filipinos are acutely under-employed.  We’ve met personal assistants who are actually computer programmers and nannies who are really nurses.

Good jobs are hard to come by in the Philippines and it’s not surprising that 2.2 million of their citizens work abroad. 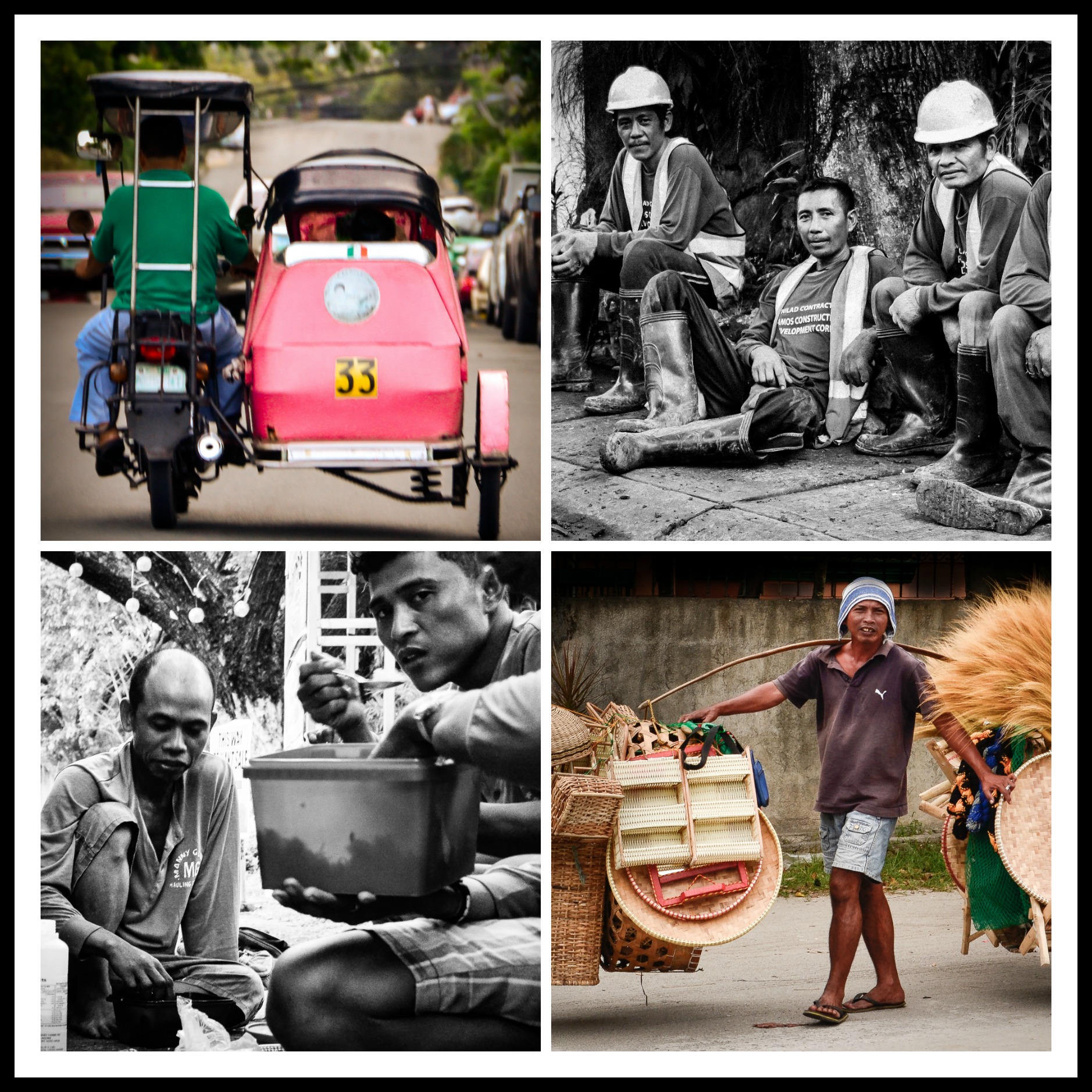 Our first trip to the supermarket was a happy one—our money seemed to stretch so far!  We loaded up the cart with raisin bread and peanut butter, quick cooking oats and sinful chocolate fudge cookies, couscous, chunky spaghetti sauce and elbow macaroni.   The tally at checkout was probably half of what we’d pay in Korea.  No longer would we have to count every single yen, won or dollar, with a pocket full of pesos we were relatively rich.

A leafy suburb of quiet tree-lined streets and elegant homes was our introduction to the Philippines. A haven of calm thanks to our kind hosts.  As soon as we ventured outside the gated complex, we were overwhelmed by the chaos and frenetic pace of the *real* Philippines.

Broad avenues gave way to roads congested with Jeepneys ( a cross between a jeep and a bus) tricycles (The Filipino version of an auto rickshaw) flashy SUVs (there’s no dearth of super rich in Manila) and cyclists.

After more than a year navigating first world roads, we’d almost forgotten how to deal with the disorder and disarray of the developing world.  We figured sticking to the outer lane of traffic was the best bet for survival.  In fact, with all the Jeepneys and tricycles lurching to sudden stops, this proved treacherous.

We were far from the only fools on bikes.  I spotted an old man on a wobbly cycle with a load of sweets attached to the back rack straddling the white line between the middle and outer lanes.  He rode slow and steady, unwavering and courageous.

We stuck to the shoulder.    Obstacles popped up every couple hundred meters and the going was slow.  We’d speed ahead for a while and then a jeepney would swerve in front as it took on passengers.  A pedestrian would suddenly dart into the road or a stubborn pack of street dogs would block the path.

Eventually, I lost sight of the old man in his zen-like bicycle bubble.  His method for dealing with traffic was obviously superior.  Still, I couldn’t muster up the courage to give it a try.

Metropolitan Manila is home to 16 million people.  The only quick way to exit the city is via the toll highway—cyclists prohibited, naturally.

We’d have to wind our way through the city.  Fortunately, we’d finally got a handle on navigating via the GPS.  Plus we’d printed out the Google maps suggested pedestrian route.

One of those turns brought us to a district of old warehouses and rundown flats.  The area was busy with men loading and unloading trucks, beads of sweat glistening on their sun darkened skin.  At the end of the road, a high metal wall blocked the passage of vehicles, though pedestrians could still squeeze through an opening.

I shot Eric one of my this can’t possibly be the right route looks.

He consulted the GPS, “Yep, through this passageway, hang a right and then we’ll hit the main road in less than a kilometer.”

I was skeptical.  And scared.

What I observed through the opening in the wall lead me to believe that this was not the kind of neighborhood in which cycle tourists should be venturing.

I accosted a few passersby and enquired whether it was OK to continue, motioning to the passageway ahead.  Each time I got the same response, a little grimace and a slight shrug of the shoulders.

I took this to mean, “You can do as you please, but I wouldn’t risk it.”

Eric, with the help of a barefoot, glassy-eyed youth, was already shoving his bike through the narrow gap.

Against my better judgment, I followed.

What we’d stumbled upon was the underbelly of the city.  A squalid shantytown whose residents looked as if they had run out of hope.

In all our years of travel, rarely have we faced such a heartbreaking sight.  This was a place where only the poorest of the poor, the truly destitute, were relegated to eek out an existence.

As you might imagine, this was not a place to play the happy tourist.  I have no photos.  but this image I found online is EXACTLY what we saw.

The place, we later discovered, was Tondo.  Manila’s oldest slum and, with a whopping 64,796 persons per km², one of the most densely populated places on earth.

I’m sure most residents of Tondo are good people.  Mothers and fathers who work hard in difficult conditions to raise families.

But in Tondo, it’s criminal gangs that govern.  Clearly this was no place to linger.

We hunkered down and pedaled, attempting to show no fear and act as if we were just out for our regular Wednesday morning ride.

No, we did not get mugged.  But I’m pretty sure we should have.  Next time we’ll get local advice and not let Google lead us blindly into one of the world’s worst neighborhoods.

Gradually the intensity of the gritty city subsided and we rolled through more cheerful countryside.

I felt comfortable snapping photos and stopping to chat. This was a familiar world.  Gaggles of giggling school children craning their necks to get a better look at our strange machines.  A handful of men checking out the tires and testing the bell.  Women hawking simple fare in roadside stalls.

People getting by, living their lives.

The Philippines: First Impressions and a Minor Case of Culture Shock

8 thoughts on “The Philippines: First Impressions and a Minor Case of Culture Shock”

A Bicycle Touring Break in Seoul Hub repaired, wheel rebuilt, well-rested and a few kilos heavier, we hopped on the...