Helen Lloyd expounds on her love-hate relationship with the Democratic Republic of Congo.

I could probably list 50 reasons to cycle in the DRC.

This country is a bit like Marmite– you’ll either love it or you’ll hate it. I loved it. And hated it. So I’ve picked five random reasons to cycle in the DRC. These could easily be someone else’s five reasons not to cycle in the DRC. It depends on your personality and your state of mind.

Kinshasa is perhaps the embodiment of an African capital. It’s a city of contrasts where the rich and poor live side by side though rarely come into contact with each other.

While the poor push loaded rickety carts around the city, the rich drive shining 4×4’s down the pot-holed streets.

While the rich spend their evenings in expat enclaves isolated from the city bustle, the poor descend onto the streets in the cool evenings.

While rich do their weekly shopping at the over-priced supermarkets selling imported goods, the poor haggle down prices on the street-side stalls and in the market.

Somewhere in-between is the cycle-tourer, who picks and chooses which circle they spend their time in.

And that in-between also includes sipping beer in the streets and eating grilled goat-meat with what you could call the minority Congolese middle class.

And that brings us to my next… 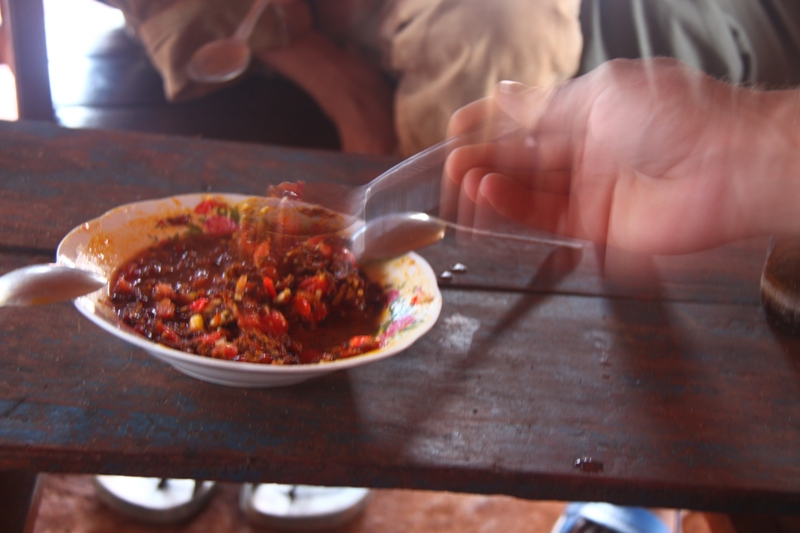 Most African countries have one beer, usually Castell, Flag or Star, that is brewed under license. The DRC however, has a selection of beers catering for all tastes. Brewed either in Kinshasa or Lubumbashi, DRC’s breweries do good trade. Primus is the beer of choice in Kinshasa and it’s either Skol or Simba in Lubumbashi. Alternatively you could try a darker beer like Tembo, Doppel or Turbo King. 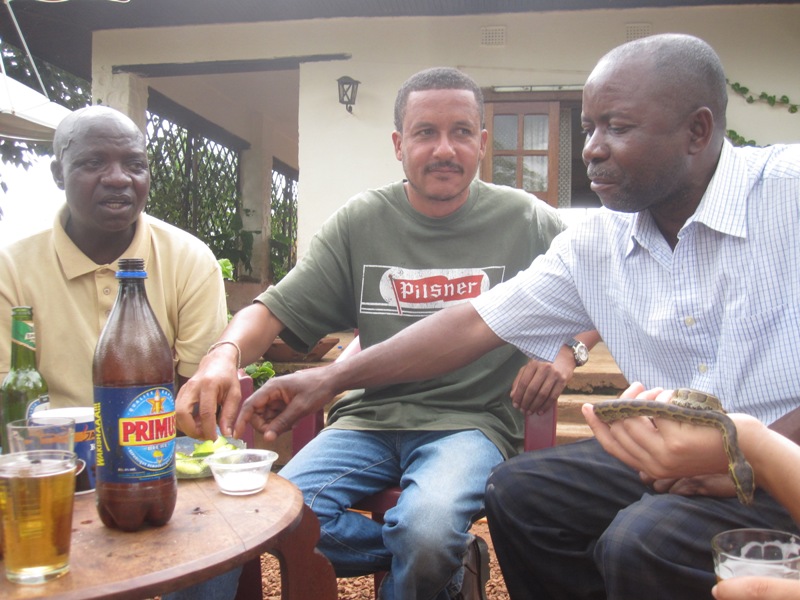 3. People to Cycle With

I only met five other long-distance cyclists on my ride through Africa. But bikes are a means of transportation for locals too. Especially in the DRC.

Where roads exist, they are shocking and travel by truck can take longer than by bicycle.

With a bike you can follow the local footpaths between villages. You’ll be sharing the path with others on bikes. Some will be cycling with goods to sell, or returning with an empty rack.

These guys just keep pedalling all day (except for the uphills where they have to push their single speed bikes). If you can keep up, they’ll make navigating through the myriad of village paths a breeze.

Alternatively, you’ll join the end of a line of water carriers. Two or three young men pushing one bike, loaded with eight jerry cans of water collected from the nearest river (which may be 10km away).

These guys sweat and strain for hours with a water weighing three times as much as any international cycle tourer. It’s fun to have company sometimes.

And what’s more, they will help fend off the hordes of chasing children!! 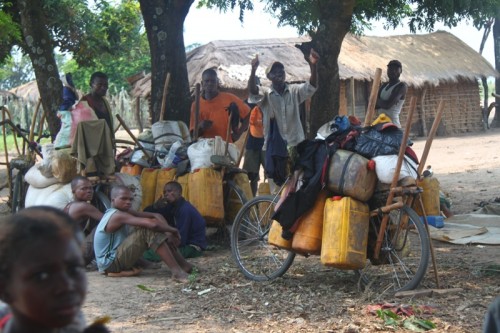 The DR Congo is basically one big basin of the Congo River.

Water is indeed everywhere. It would be impossible to cross the DRC without mentioning water.

If you’re cycling, it will involve crossing large rivers on new Chinese-built bridges. More likely, wading through the smaller ones. Probably a boat ride or two.

Pay a local to pole you and your bike downstream in a dugout canoe. For once, you can sit back and enjoy the passing scenery.

And then there are beautiful lakes with crystal clear water. You can see the source bubbling up through the earth’s submerged surface. You can drink the pure water straight from the lake.

Or join the locals in the evening for a wash by the lake’s edge as the young boys and girls catch fish. 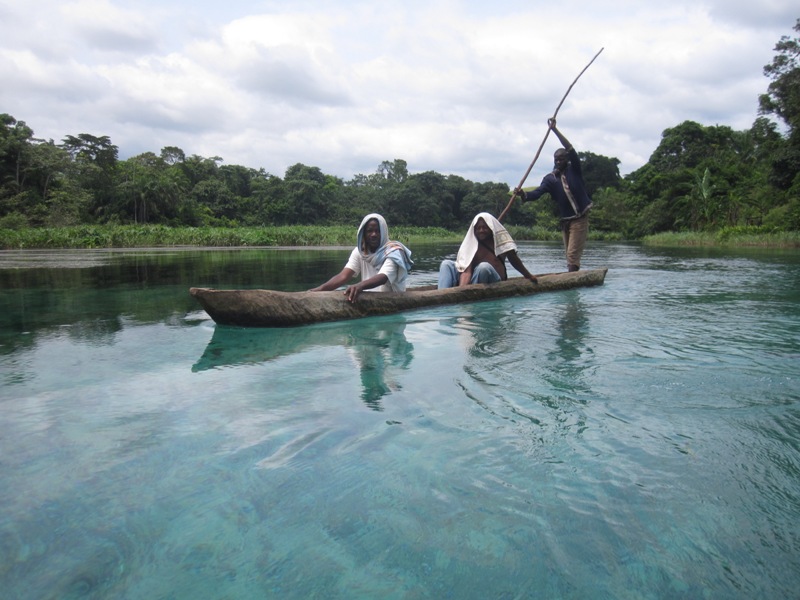 My best advice for travel in the DRC is to expect the unexpected.

It’s most likely that your images of the DR Congo are nothing like reality. Which generally, is a good thing!

Every day will have its challenges of course – it is definitely one of the harder African countries to cycle through. But equally, every day will bring a something new.

You may be cycling (or pushing) along footpaths lost when you come across a small town in the forest where there is a blank space on your map. Normal.

You may find yourself eating mice or snake or termites and washing it down with beer AND enjoying it. Normal.

You may find yourself strangely liking fufu. Normal.

You may see a snake that a local kills by hitting it’s head on a rock only to see a chameleon fly out of the snake’s mouth. Normal.

You may expect corrupt police and find friends in uniform. You will find yourself wanting to return. Normal.

Normal for the DR Congo at least. 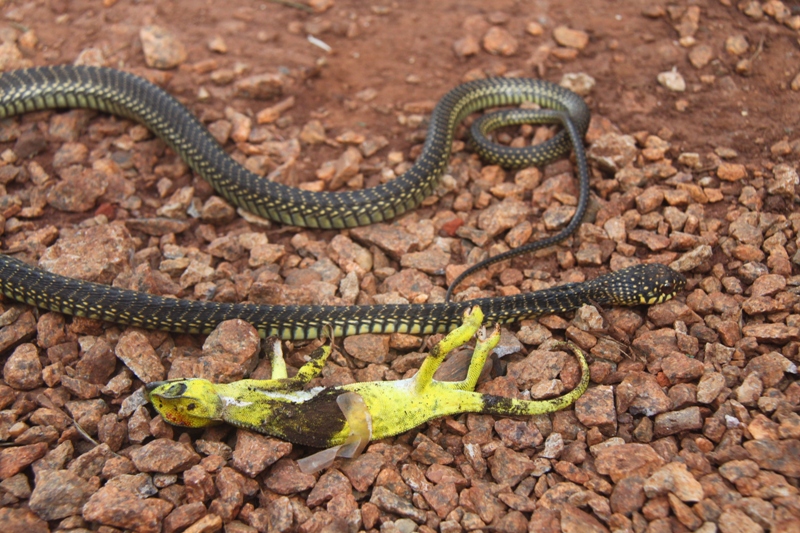 Helen’s passion for travel was ignited when she joined a youth expedition to the Indian Himalayas when she was 16.

The next year she visited Morocco and followed that with a gap year in South America.

Since then, trips abroad have included travels along the Silk Route, Karakorum Highway and back to South America; safari in East Africa; hockey-touring in South Africa and cycle-touring in Ireland and Cuba.

A knee injury has curtailed the sporting participation, but this gave extra time to indulge in her other passions… namely travel and photography.

The end result is that in the summer of 2009 she quit her job and left England to cycle through Africa. 25,000km and 20 months later she arrived in Cape Town.  Her latest tour is a ride across the Great Divide Trail.  You can read more about her adventures at Helen’s Take On.com

2 thoughts on “Top 5 Reasons to Cycle the DRC”

Steve Fabes shares his thoughts on what was-- until very recently--one of the most popular destinations on the African continent....