Margo and Chris reminisce about the magic of their very first bicycle tour:  a ride around Cuba.

We said we'd travel -just the two of us- when our kids were grown, so we got new bikes and spent January 2006 travelling in Cuba.

This was the first adventure of our “empty nest” era, and we chose the trip because we wanted to glimpse Fidel's Cuba before it vanished.

It's been five years since that bike tour; we’re thoroughly hooked on bike travel and have had many two-wheeled adventures since that first venture.

These intensive vegetable plots were part of Cuba's logical response to food shortages after the collapse of the Soviet Union. They are an intelligent use of land and resources that has increased Cuba's food self-sufficiency, and we would pass these cornucopias of fresh produce on the outskirts of most towns.

They are collectively tended plots of vegetables and fruits, always close to where the produce will be consumed.

Garden beds are raised for intensive planting and good drainage, and soils are fertilized with manure from domestic animals rather than imported chemical fertilizers. Sometimes the produce is sold from a roadside stall near the gardens, but more often it’s brought into town early each morning by sellers who move through the streets by bike, calling out what’s on offer: “Cilantro!” or “Lechuga!”

“Sustainable agriculture” may be the new buzzword of the developed world, but in Cuba organized local food production was a necessary response to hunger. 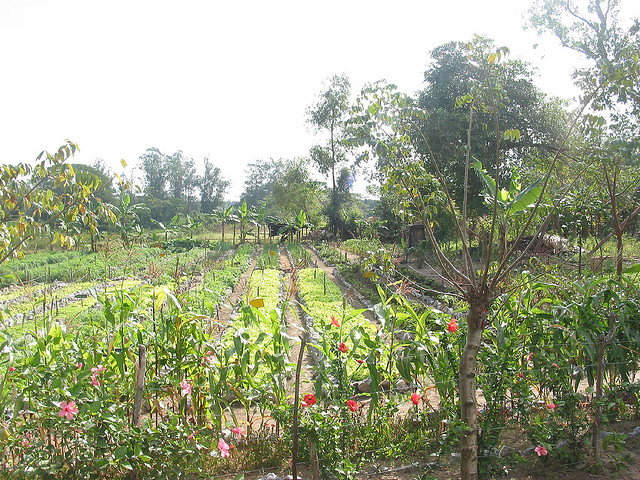 Local families with spare bedrooms are licensed by the authorities to provide B&B style accommodation to tourists. The casa hostess knows where to buy fresh local ingredients and usually prepares hearty suppers and breakfasts.

These casas are often in the home of a retired couple, and in our experience hosts were patient with my beginning Spanish and prepared to sit and chat. One Señor was a retired cattle specialist. He was less busy than Señora, and pleased to answer my endless questions about local agriculture.

Near the end of our journey, we sat with the oldest couple we’d stayed with to watch the local history channel. They took time to make certain we knew that -- although the current system in Cuba has its flaws -- they far preferred living under it than under the USA-aligned Batista regime which preceded the revolution. They shared firsthand accounts of some of their horrific experiences under Batista and his thugs.

Foreigners stealth camping in Cuba put local landowners at risk of fines or worse, since authorities assume the landowner has been clandestinely paid. The flow of convertible pesos from tourists to locals is strictly regulated, and any infraction –real or suspected-- is an offense that brings serious punishment. 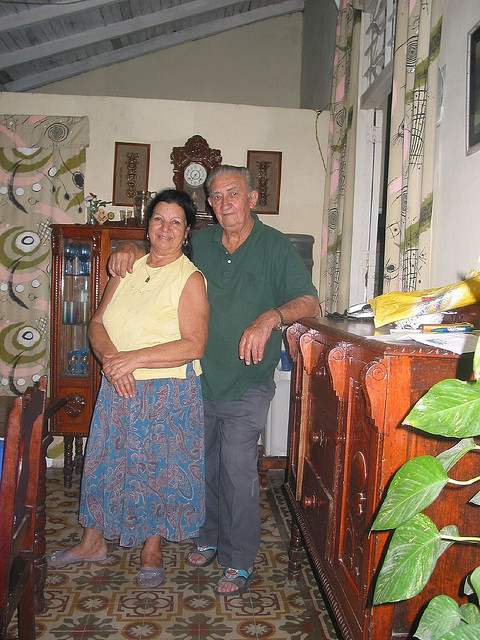 You don’t need to be into the nightclub scene; you hear music everywhere in Cuba. Folk or classical groups play in a small town’s Sala de Cultura.

A band may play well into the night in the local park, usually just when you really needed to sleep.

Familiar strains of John Lennon’s Imagine and other Beatles oldies trail from tiny cottages as you pedal by. Local radio stations broadcast Beatles tunes frequently, and John Lennon is a local hero.  In fact, a bronze statue of him sits on a bench in a small park Havana, with the quote “People say I’m a dreamer...” in Spanish on the paving stone beside it.

The speleologist wound up our cave tour in Pinar del Rio by playing a rhythmic tune on stalactites, expertly controlling the variation in pitch. In Old Havana, a chamber ensemble played Mozart in an old church, now used for concerts because of its exceptional acoustics.

The sounds of Cuba are beautiful! 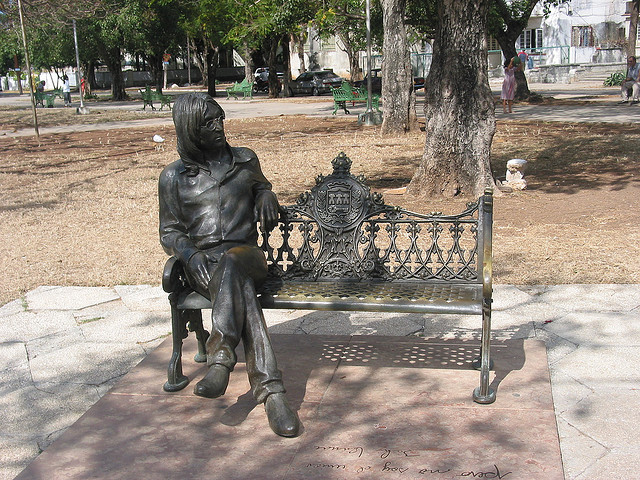 You can ride the length of Cuba spending most of your time flying along with the wind at your back rather than battling headwinds -- as long as you ride from the southeastern tip to the northwest.

This was our first international tour, and we hadn't researched prevailing wind direction beforehand.

We set out northwest from Havana, which was easy, but when we looped back southeastward we found ourselves working against a strong headwind.

Since we only had time to ride the length, rather than do a full tour of the island, we took a bus to Baracoa in the southeast and rode back to Havana from there.

When you have a choice, why plan to ride in a direction that becomes a struggle, when you can do the same route in the other direction?  Our experience in Cuba taught us to research wind patterns early in the planning process for later bike travels. 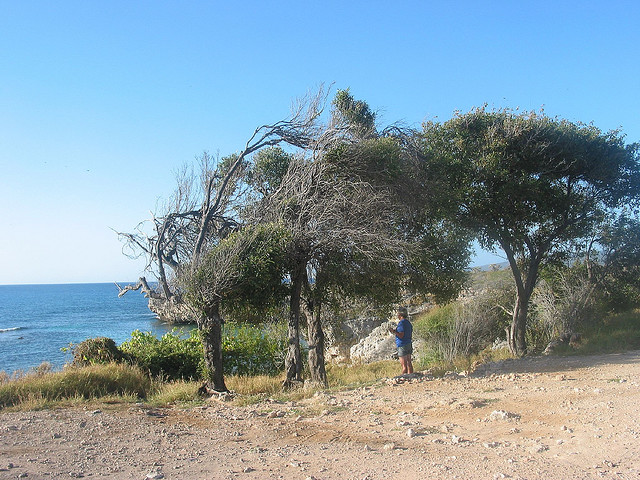 At the beginning of Cuba's “Special Period” in the early 1990s, oil became suddenly scarce in Cuba when a collapsing Soviet Union could no longer supply it.

A network of paved roads remains, but a touring cyclist in rural areas is more likely to share these with local transportation cyclists, oxen pulling water tanks, or horse drawn carts carrying piles of sugar cane than with motorized traffic.

With motorized transport scarce, locals often hitchhike or gather at junctions where a uniformed official organizes rides in buses or trucks.

The locals ride bikes in varying states of disrepair, sometimes heavy Chinese-made Flying Pigeons. Often one youngster sits on the carrier behind a parent, and another rides on a wooden seat on the crossbar.

Anything and everything is moved by bike, and sometimes Sunday dinner is wriggling and crowing in a sack dangling from the handlebars. Even the broad autopista has a lane reserved for bicycles and horse-drawn vehicles. 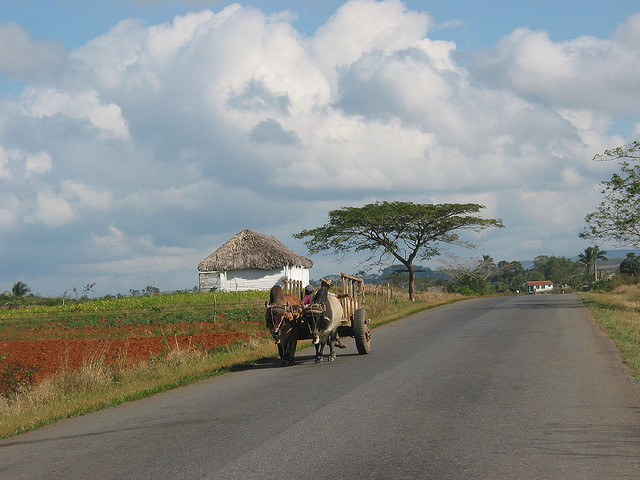 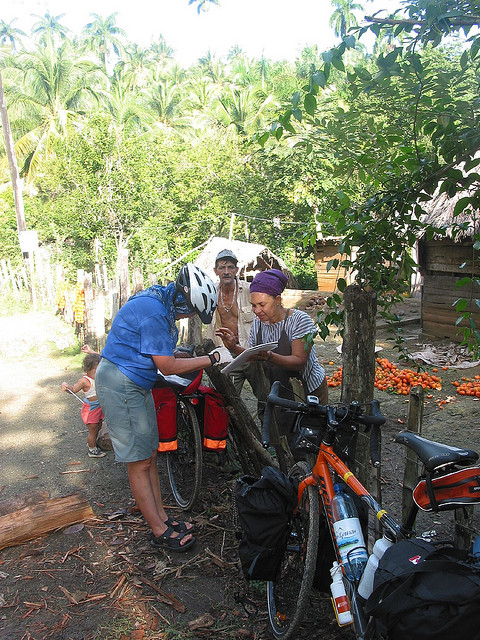 Chris and Margo are two "empty-nesters" who've traded in life at the office for the freedom of bicycle touring.

Their two-wheeled adventures include a tour around Cuba, a ride through South America's Southern Cone, as well as a year-long tour from Bangkok to Paris.

They enjoy cycle touring because it allows them to move at the speed they choose and to meet local people, and they love experiencing the places in between tourist centres that are not often visited.

Check out their website, Chris & Margo's Wanderings, for travel tales, touring tips and advice on choosing the right bicycle.

Have you cycled Cuba?  Please share your tips and experiences.

Helen Lloyd expounds on her love-hate relationship with the Democratic Republic of Congo. I could probably list 50 reasons to...