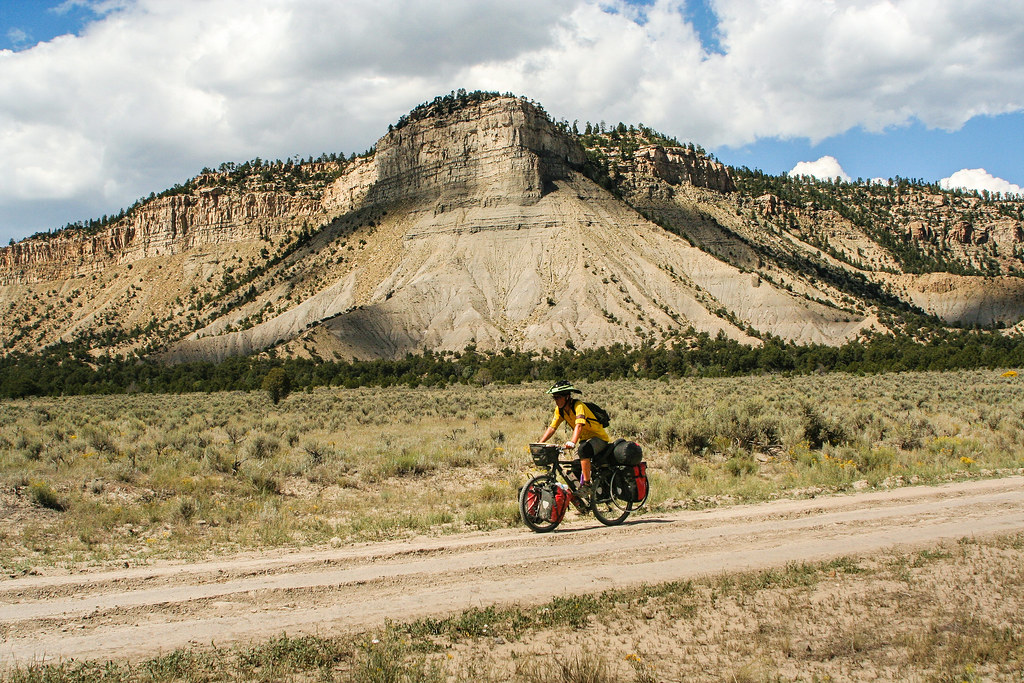 After conquering Great Divide Route’s highest point,  Indiana Pass at 11,910 feet, you’d think riders could let out a sigh of relief.  The tough stuff as over.  They’d glide across New Mexico and sail across the Mexcian border with ease.

New Mexico: the toughest section on the GDMBR

Here’s what riders are confronted with on the New Mexico section of the GDMBR:

Oh, and I’d be remiss not to mention the sinister goatheads.  Haven’t heard of them?  Goatheads are sometimes referred to as nature’s tire spikes (another proof that everything from nature is not always nice).  Goatheads are evil, multi-headed prickly plants that litter the route and launch successful attacks on even the most robust tires.  Goatheads are indiscriminate.  Your trusty Therm-a-rest, not to mention the bottom of your tent, are as likely a victim as your poorly shod foot.

If you’re driving through the southwest and come across a distressed cyclist throwing a toddler-sized hissy fit, you can bet he’s been a serial victim of the goathead’s wrath.

This being our second time biking through the southwest, we were duly armed for goathead combat.  Self-sealing tubes (Slime makes good ones) were our armor of choice.  Prayer is another often-invoked method, although the effectiveness of intervention by higher powers has yet to be scientifically proven.

Now, you’ve never read on this blog any boasts of cycling six months without a flat.  Never happened, probably never will.  The World Biking team is what you’d call puncture prone.

If there’s one spot along the entire Great Divide route where cyclists congregate, it’s the Toaster House in Pie Town, New Mexico.  Pie Town is pretty much in the middle of nowhere.  It’s the last stop before the demanding ride to Silver City and a great spot to rest up from the rigors of the road.  Pie Town’s raison d’être is to provide a pit-stop and pies to weary motorists and hungry cyclists

The Toaster House is a sort of donation-based biker hostel run by a kind-hearted road angel called Nida.  She’s been welcoming riders for decades and has received national honors for her service to the long-distance cycling and hiking communities.

As we lounged on the wide Toaster House porch, our fellow cyclists pumped and cursed and repaired the pin-pricks punctures caused by the wicked goatheads.

Eric carefully examined our tires.   Surely they, too, were riddled with goatheads.  Because the thing is, goatheads are a silent enemy.   They latch on to your tire and it’s often not until you yank them out that the damage is done.  A pop followed by the hiss of air escaping and then a furious WTF escapes even the most pious and polite cyclist’s lips

But it appeared a miracle had taken place (even without the requisite prayers): our Schwalbe Mondial’s had valiantly fought off the goatheads!

Now, if we could just say the same for our much-loved Thermarests.

After the vast empty spaces and rolling hills of Wyoming’s Great Basin, we were ready to test our mettle on...