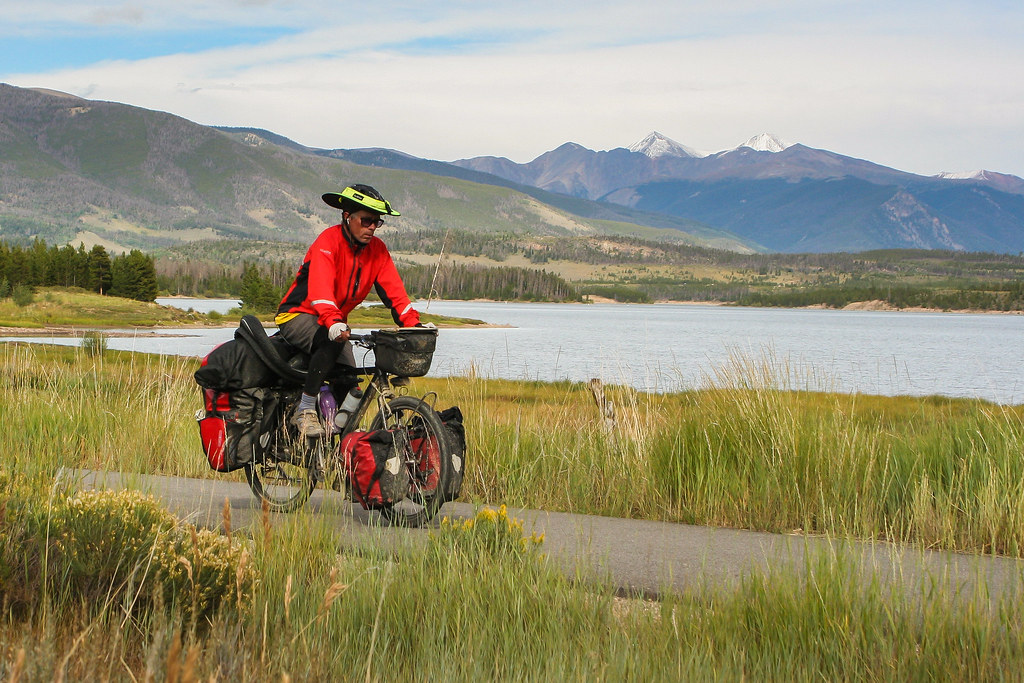 After the vast empty spaces and rolling hills of Wyoming’s Great Basin, we were ready to test our mettle on some big mountains.  Colorado called.  The Cowboy State is home to the Great Divide’s most momentous climb: Indiana Pass (11,913 feet /3,630 meters).  The GDMBR’s pinnacle is situated way down in the southern part of the state, not far from the New Mexico border.  Plenty of challenges lay in between.

Sagebrush soon gave way to stands of aspens and pine.  Ranching communities were replaced by trendy mountain towns and those devilish Wyoming hills grew into long, gently graded climbs over some of America’s highest mountains.

It was along this stretch that we crossed paths with the greatest number of Great Divide riders. First off were Heather and Karey out of Portland, Oregon (America’s unofficial cycling capital).  Since Montana, we’d met just two other women (both part of a male-female couple) on the divide route. All the other dozens of riders had been dudes.

What an inspiration to finally see some female adventures.  Later we would meet up with Bill and Joireen, a pair of early retirees cycling down from Alaska and finally Mike Green, the cowboy on a bike riding all the way from Prudhoe Bay.

Most popular set-up for the GDMBR

As the photos clearly show, GDMBR riders these days mostly prefer a lightweight bikepacking set-up. Fully-loaded riders are rare on the GDMBR. In fact, I don’t believe we ever crossed a rider whose first remark to us was not some version of, “Damn, you guys are really loaded.”  Yes, I know!  Trust me, on a 1,500-meter climb I can feel those extra 35 kilos.

Is there any ‘best’ set-up for the GDMBR? Rider’s styles vary, so clearly there’s no one-size-fits-all solution for any bike tour.  The trade-off of going light is usually that you’ll spend more on the road.   Those that go super light with pure bikepacking gear tend to eat out in restaurants and snag motel rooms as often as possible.  This makes sense since their tents will be tiny and therefore less comfortable and their food carrying capacity will be more limited.

Is it possible to ride the GDMBR on a touring bike with panniers?

Riding a fully-loaded touring bike with panniers is definitely doable on the GDMBR.  The climbs are never too long or steep that you can’t manage with all the weight.

The majority of GDMBR road surfaces are packed dirt and gravel. You will zip along just fine on a standard touring bicycle without shocks or extra wide tires.

But naturally, the weight of a fully-loaded touring bike will slow you down on the GDMBR. If you’re not in a rush, that’s not a problem. Relax and enjoy the scenery. Bicycle touring is not racing.

During some stages, you can choose the less taxing ‘alternate’ routes. These options are usually just as scenic but they may be on paved roads.

We recently met up with Scott from Bozeman, Montana. He’s ridden the GDMBR both fully-loaded on a touring bicycle and with a bikepacking set-up.

I asked him which way he believes works best for the GDMBR.  He says he loves his current lightweight set-up because the bike’s easy to maneuver and fun to ride.

The drawback of the bikepacking setup is having to fiddle around with all the different bags and stuff gear deep into a dry sack. Scott’s final verdict on the best GDMBR set-up is that having at least back panniers is more convenient.

I think he’s probably light. A hybrid set-up is the best option on the GDMBR.  You’ll benefit from the convenience and waterproofing of panniers on the back combined with high clearance bikepacking gear on the front. MBR.

What’s the best section of the GDMBR?

Colorado is probably our favorite section on the GDMBR.  There are epic mountain climbs, gorgeous camping spots and incredibly varied scenery.  Now if there’d just hadn’t been so much RAIN, I’d award the GDMBR Colorado section an enthusiastic five stars.

A special thanks to all our amazing Colorado hosts!  Ray in Steamboat Springs-great to catch up a second time round.  Robyn in Frisco—best of luck on your big bike tour and thanks for introducing us to the fine art of dumpster diving.  Paul and his family for amazing meals and wonderfully in-depth conversations.  Mike and Loni in Salida for answering our desperate last minute request.   Suzanne and Bob in Del Norte for photo tips, lovely meals, and much-needed relaxation.

As we zipped past the towering peaks of the Tetons, hail pelted us with a devious force.  We were cold. ...