For a cyclist, Indonesia–a country comprised of some 18,000 islands–poses more than a few logistical challenges.  If you stick to the main islands—Java, Sumatra, maybe Bali and Lombok—getting  around’s not too tough.  It’s when you venture farther afield, say to Sulawesi, Sumbawa or Borneo that things get tricky.

We’d set our sights on Borneo, the third largest island in the world behind Greenland and Guinea.   Like so many people, in my mind I’d painted Borneo as a magical place of pristine forests filled with screeching monkeys and gentle orangutans.  A place where native women prance around in grass skirts weaving bamboo baskets and men in loincloths and feather head-dresses wander around hunting wild boar with traditional tombak spears. A place where one might even bump into a headhunter or two.  But before these escapades and encounters could begin, we had to actually get to Borneo. An adventure all in itself, I was soon to find out.

This boat or that boat?

Eric, the logistical mastermind of our round the world tour, had been running various schemes past me for weeks.

“We could ride from Singapore to Melaka,” he’d begin, “then hop on the ferry to Dumai and ride to Jakarta.  From there we’d pick up another boat to Borneo.”

“Or,” he’d continue, “we could keep riding to Semarang and take a ferry to Kumai in South Kalimantan and do the tour in reverse.”

“Our third option….”   But by then my eyes had already glazed over and all the names and places were jumbled up in my brain.

“…so what do you think?”  I offered a weak smile, “You choose, I trust your judgment.”

The best option, said Super Husband, was the direct ferry from Bintan to Borneo via Batam.  That way we’d avoid the hassles of navigating our way through Jakarta, a city of 9 million known to be one of the most congested capitals in Southeast Asia.   I was with him there.

Problem is, just one ferry per month plies that particular route.  We’d have almost a week’s wait on Batam, a small Indonesian island not far from Singapore.  Batam caters to the resort crowd, drawing businessmen from Singapore in search of a little illicit fun and families in search of an economical beach holiday.

An honest to goodness vacation

Turns out, we got to enjoy a little vacation, too.  Super Husband somehow got in contact with a fellow called Chris who just happens to be a fan of cycling.  And this (exceedingly kind) Chris character put us up in a fancy hotel throughout our 6 day wait on Batam.  We’re talking swimming pool and a view of the sea from our finely appointed air-conditioned room.  In six years on the road, we’d rarely been in a place which supplied towels let alone one that offered daily maid service, satellite TV and a bell hop to wrestle with our bags.

The six days of pampered respite flew by in a blur of leisurely meals and long swims.  I knew where I would sleep at the end of the day, where my next meal was coming from and where to turn for an endless supply of safe drinking water.

So back to the bikes with butterflies bouncing around in my stomach like it was my first-ever day of bicycle touring.  A quick ferry to the island of Bintan, a 90 kilometer cross-island ride to a port on the other side of the island, a night couchsurfing and the next day we’re up early to catch the ferry that will eventually take us to Borneo.

Not the first, but maybe the worst

This was not our first Third World ferry experience.  We’d caught a boat down Lake Tanganyika to a remote part of western Tanzania, we’d sailed across the Indian Ocean to get to Zanzibar, we’d hopped a ferry for a thousand kilometers down the mighty Amazon and of course there was the infamous ferry across Lake Nasser from Egypt to Sudan.

We’d arranged for economy class tickets for the Borneo boat.  That meant no reserved seating.  We’d have to carve out a space for ourselves, the bikes and all our belongings.   I was anticipating being a little cramped, but was certain Economy Class was something I could endure in the spirit of saving money.

Liz and Chris from Bikeabout had gone economy class on an Indonesian ferry, pointed out Eric, as had Spaniard Salva Rodriguez.

That Salva had gone economy class didn’t mean much.  This guy is one of the toughest cyclists I know (of course, I don’t know Salva personally, just from the internet, as is the case with most of my bicycle touring friends.)  In his most recent newsletter, Salva wrote of cycling through the Copper canyon in Mexico.  There are no real roads through the Copper canyon, just some rocky tracks snaking their way through very rugged and remote terrain.  But Salva never complains (at least not publically), no matter what the conditions.  This guy could probably ride through Siberia in January and talk about it as if it he’d just biked through France on a fine summer day.  Nothing perturbs Salva.  I admire Salva.  I earnestly wish I possessed many of his fine character traits.  But after all this time on the bikes I know I’m no Salva Rguez.  I’m a middle-aged woman who grew up despising camping and anything that got dirt under her fingernails.  Nowadays, I like a little adventure.  I embrace adventure.  I might go so far as stating that I need adventure.  But I’ve got my limits, particularly when it involves noise and sanitation.

Unsurprisingly, general bedlam reigned at the port in Bintan.   Porters drenched in sweat heaved everything from fridges and washing machines to bicycles and pellets of laptop computers up a narrow passageway.  A crowd of confused looking ticket holders surged towards the boat as others attempted to disembark.  Several policemen tried to tame the chaos, but their sharp whistles were of little avail.

Luckily, our couchsurfing hosts, Robert and Ria, were there to assist.  While they kept an eye on our bikes, Eric and I grabbed some bags and elbowed our way through the crowd.  “Economy Class,” I shouted out to one of the sailors in white.  “This way, missus,” and he pointed me into a cavernous smoke-filled hall, thick with the sweet scent of clove cigarettes mixed with the far less agreeable stench of a backed up toilet.  Orang 147, I noted—the area slept 147 people. There were five more similar spaces, I was to discover later, bringing the total capacity of the boat up to almost 1,000.  During holiday periods, an officer explained, the ship packed up to 6,000 travelers. I was battling back claustrophobia at that very moment, when the boat was carrying just under its official limit.  Imagine 6,000 people jammed into a space I considered too cramped for the 1,000 individuals it was designed for.  It would be like squeezing two more couples and all their cycling gear into our three-man tent.

The economy class room we’d booked into was packed with mattress after mattress, just inches apart, lined up one after the other on low platforms.  Music blasted from all directions, cigarette butts carpeted the floor, and bright fluorescent lights assaulted my eyes.   As I took in the horror of our proposed  accommodation for the next 60 hours, hundreds of weary faces stared back. 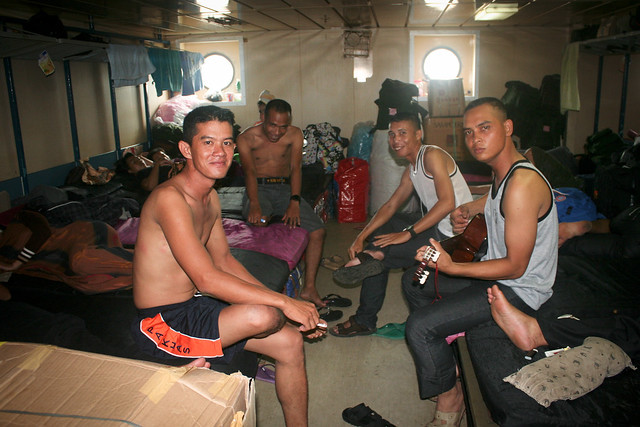 “I can’t do this,” I said.  “I can’t endure three days in these revolting conditions,” I added, plopping down next to the panniers.  No amount of cajoling could make me change my mind.  It’s true that I hadn’t been bothered by 30 hours of deck class in Sudan.  The cool December air was invigorating, we’d had plenty of space to stretch out and the devout men who came to pray on my yoga mat (mistaking it for a modern prayer rug) gave me a good laugh.

But I put my foot down at 60 hours of second hand smoke, shit smeared toilets and crappy pop music.  Another $50 for an upgrade to second class?  Money well spent.

After that small investment in our physical and mental well-being, I was a whole lot happier.  Yes, money can buy a degree of happiness, that’ one thing bicycle travel has taught me.   While a second-class sojourn on the K.M. Bukit Raya wasn’t exactly a cruise on the Love Boat, it far surpassed my minimum standards of comfort.

As foreigners, we were assigned a four-berth cabin.   All. To. Ourselves.

Normally men and women are lodged separately, but the indulgent officer in charge would make an exception in our case.  They could have stuck me in the broom closet for all I cared.  Just as long as it was quiet and smoke-free.  But the cabin, albeit a bit cramped, was fitted with comfortable bunks covered with  fresh white sheets and the  adjoining bathroom sported a western style toilet and one of the best hot showers I’ve ever experienced.  At times, the lethargic air-conditioning system even forced out a little cool air.

In second class, the days passed rather pleasantly.  For adventure, I could stroll around the outer deck, snapping photos of the picturesque palm-covered islands we passed and stumbling over sleeping passengers.  Being the only foreigners aboard, we were a novelty and the subject of intense curiosity.  It was easy to strike up a conversation with just about anybody.

And when I’d my fill of taking in the beautiful views and answering the same questions we’ve been subjected to since we set off (What is your country?  How long you stay in Indonesia?  Why you go on bicycle?  How many tires you use?  Why you don’t have children?), I could hide away in our second class haven. 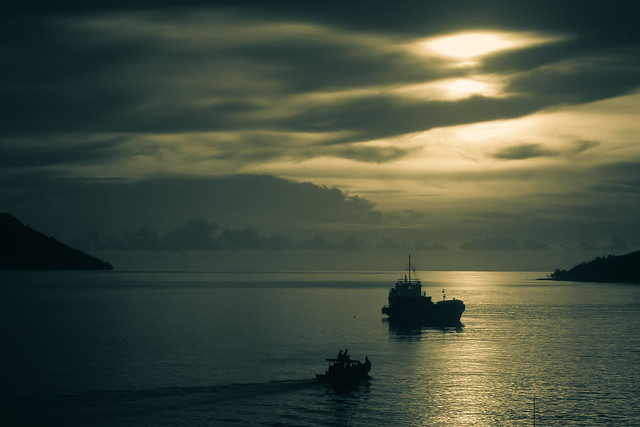 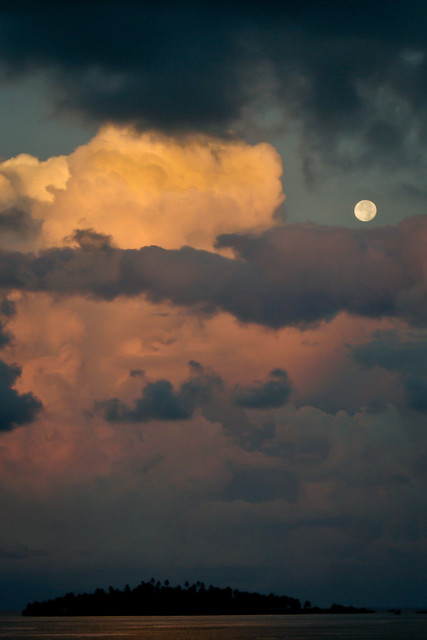 On Land at last!

After two and a half days at sea, we pulled into port.  Within moments of arriving on Borneo, my romantic vision of the island was all but crushed.  Pontianak, the capital of the Indonesian state of West Kalimantan, is a thriving city of satellite dishes and shopping centers, internet cafes, big banks, hotels (the Garuda offers Executive Karaoke) and fast food outlets.

In Pontianak, you’re about as likely to spot locals in grass skirts and loincloths as you are to find an Apache warrior in full headdress strutting through downtown Phoenix.  Locals zip around on noisy motorbikes and spend their time rapidly tapping out text messages and checking out their friends’ status updates on Facebook.

Nope, we haven’t crossed paths with any headhunters yet, but we’ll keep you posted.  Who knows what adventure awaits farther afield.  This is BORNEO, after all!

Check out more photos from our time Bicycle Touring in Indonesia.

One thought on “Slow Boat to Borneo”

After six years working in the UK, New Zealanders Emma Philpott and Justin Hewitt of Rolling Tales were ripe for...