Most cycle tourists rank “Easy Interaction with Locals” as one of their top reasons for travelling by bicycle.  Whether it’s exuberant kids in Burundi cheering you up the mountainside, taciturn Mayans of the Guatemalan Highlands welcoming you into their humble adobe homes or an affable American offering you a cold coke on a hot summer’s day, it really is the people that make the places.

It’s fair to say that we’ve meet thousands of individuals over the course of our world tour.  Most we’ll never see or hear from again.  That’s the nature of a nomadic life.  Friendships are intense and fleeting.
But even though we may never come into contact ever again, some people won’t be forgotten.  Joseph is one of them.

Our connection with Joseph came about just as so many do:  we needed help.
A few days into our circumnavigation of Borneo, we’d realized this is an island with little terrain suitable for wild camping.  Slopes are steep, vegetation is thick and rains are heavy.  Not to mention the snakes, scorpions and other creepy crawlies we’d been coming across on an almost daily basis.  Imagine pitching your tent in the heat and humidity of the Florida everglades and you’ll get the picture.
On this particular day, dark storm clouds were rolling in; the temperature had dropped 10 degrees in 10 minutes and I was well aware that the heavens were on the verge of unleashing a mighty tropical storm.  Time to sprint for cover.
We spotted a sign for a Seventh Day Adventist Church and followed it into a clearing of simple homes.  As we rolled up, Joseph stepped out to greet us.
“Come, come,” he beckoned, “you can sleep here tonight.”  We rolled the bikes into the simple wooden church not a moment too soon. 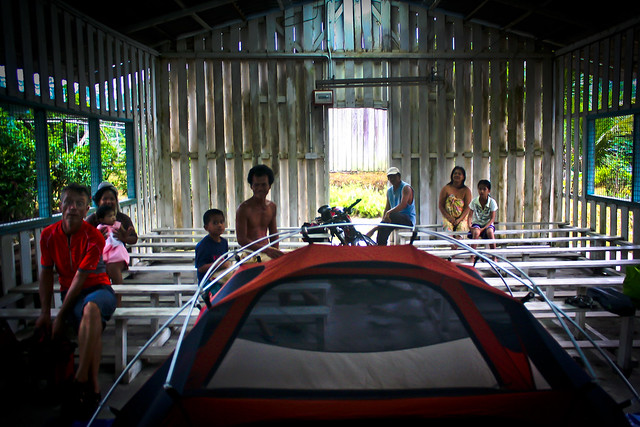 After we’d settled in, Joseph brought us mugs of sweet tea and he shared his story, the sound of rain pounding down on the church’s metal roof drowning him out at times.
“I am so ashamed that I cannot offer you more,” he began, his sad eyes belying his soft smile.
Joseph was busy raising four young children alone, recently having lost his wife to dengue fever.  Before her death things had been good.  He’d worked abroad in Singapore and Oman, sending money home and returning to Malaysia each year for a month’s visit.  Now his wife was gone, he’d returned to his small village in Sarawak to care for his family and he no longer could depend on a steady paycheck.  Most local men survived by selling timber from the surrounding rainforest.  It was wrong, he knew that.  Government officials had been out to warn them about the illegal nature of cutting trees in protected areas.  A couple of guys had even been caught red-handed with chainsaws.  They’d been handcuffed and carted off to jail.
But a man’s got to feed his kids.   Joseph’s youngest, a timid boy of six, nestled on his lap as he shared the tale.

We set off at first light the following day.  Being so near to the equator, the tropical sun was scorching hot by 8 AM and we wanted to enjoy at least a couple hours of pleasant pedaling.  Joseph was up, too, bustling about in the simple outdoor kitchen preparing a meal for his children.
“Thank you for your visit,” he said as we shook hands goodbye, “you are welcome anytime.”
We cycled out into the hilly countryside and I concentrated on the climbs ahead.  A  few hours later, I still couldn’t get Joseph off my mind and I’m not quite sure why.  Maybe it was the love he showed for his children that had impressed me.  Perhaps it was the dignity with which he accepted his fate.  Or maybe it was just the simple act of forming a connection with someone whose life, on the surface at least, seemed so different from mine.

One thought on “Oh, the People You’ll Meet!”

For a cyclist, Indonesia--a country comprised of some 18,000 islands--poses more than a few logistical challenges.  If you stick to...