Eric stepped out of the small supermarket scowling.

Pretty normal, I decided, since we are, after all, in Malaysia.

Normal, but annoying, since all we had was Thai Baht.  And a stash of US dollars, but those were meant for emergency purposes only.

A growling stomach could hardly be interpreted as an emergency.  And besides, those dollars were certainly just as worthless as the Baht when it came to supermarket shopping in small Malaysian border towns.

Honest to goodness Third World borders are so much easier to navigate.  Sure they’re hectic, but Third World border crossings come equipped with a small army of enterprising individuals eager to cater to a traveler’s every need.

Touts roam around drumming up business for cheap hotels, hawkers tempt you with cool drinks and fried snacks and you never have to look far to find a few shady looking money changers flashing big wads of cash.

In orderly Malaysia, there was none of that.  Just air-conditioned supermarkets and solid looking ATMs that obstinately refused to spit out cash no matter which international card we inserted.

Which left me sulking on the curb with an empty stomach.

Given the many gastronomic delights of Southeast Asia (think banana pancakes, coconut curries, fresh fruit shakes and deep fried prawns so cheap even Eric admits they’re a bargain), we’d  slacked off when it came to stocking up on provisions.

But no local currency meant no restaurants and no supermarkets and we were hungry.

A quick rummage through our panniers unearthed two banged up tins of tuna.  They’d been with us since the Yukon and will probably still be buried at the bottom of the bag when we hit Australia in 6 months’ time.  I discovered ramen noodles as well, something I’d considered a real treat back in Nigeria (which tells you something about that country’s cuisine); I could even recall a few times back in remote parts of the Andes when we’d have pounced on instant noodles.  That day Ramen noodles sounded about as enticing as the fried creepy crawlies we’d come across in Laos.

But Southeast Asia had spoiled us.  Made us soft and demanding.  Turned us into food snobs of a sort.

Eric is playing Super Husband trying to convince the shopkeeper to accept foreign money just so his poor, hungry wife doesn’t have to cycle 30 kilometers on an empty stomach to the next town with a bank.

Poor Hungry Wife glares  at the tins of banged-up tuna, eyes the ramen noodles with an air of contempt.  Kind Malay passerby takes in the scene.  Poor tourists, she is thinking.  How strange they are to ride bicycles in such a hot country.  They are hungry.  I must help them.  It is my duty.  They are guests in my country.  Very odd ones, from the look of it, but guests nevertheless.

Poor Hungry Wife accepts chocolate filled buns and other goodies from Kind Malay Passerby. She is embarrassed (I’m not a beggar, she tells herself) but appreciative.   The two women exchange smiles.  Grateful foreigners cycle into the distance, stomachs satisfied, marveling at the kindness they stumble upon again and again and again. 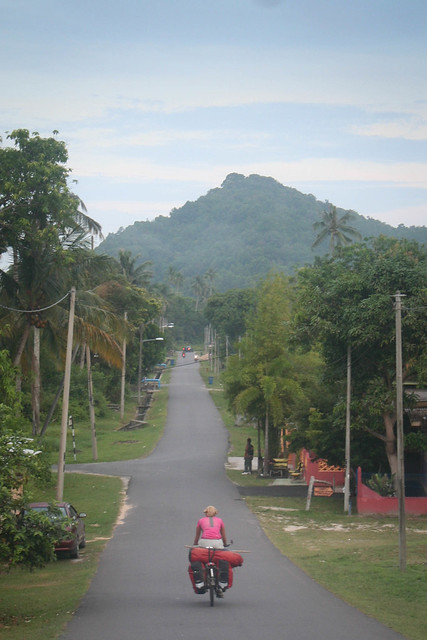 Malaysia is nothing if not a land of diversity.  A fusion of cultures, of course, with the nation made up of Malays, Indians and Chinese and their corresponding places of worship, mosques, Hindu shrines Buddhist temples, and the odd church here and there.

For ultra-modern fast-paced living, the West coast is the place to be.  For a slower moving society still holding fast to tradition, the East Coast is the spot.  Or so say the guidebooks.

Being of bucolic bent, we opted for the east.  Energized by those chocolate buns, we cruised into the northeast’s major population hub: Kota Bahru in the state of Kelantan.

Kelantan is the heart of conservative Malay culture, and far different from the rest of the country.  Muslim women in Kelantan, for example, are REQUIRED to cover their heads and must dress in a highly conservative manner.  That means absolutely no exposed flesh apart from hands, feet and face.

In the rest of the country, oddly, those same women can dress as they please—mini-skirts, plunging neck-lines, you name it.  Do that in Kelantan and they’ll be slapped with a hefty fine.

As a foreigner, I’m free to dress as I please throughout the country, as are Chinese-Malaysians and Indian-Malaysians.

Well, I ‘m free to wear what I want most of the time.  Not when camping outside a mosque.  There I really ought to cover up, as the Imam in charge politely reminded my husband (because, of course, it wouldn’t be proper to speak to a foreign woman directly).

Believe me, being buried under long trousers, long sleeves and a headscarf in tropical Malaysia is about as fun as jumping fully-clothed into a sauna.  I’m definitely biking Iran in the winter. 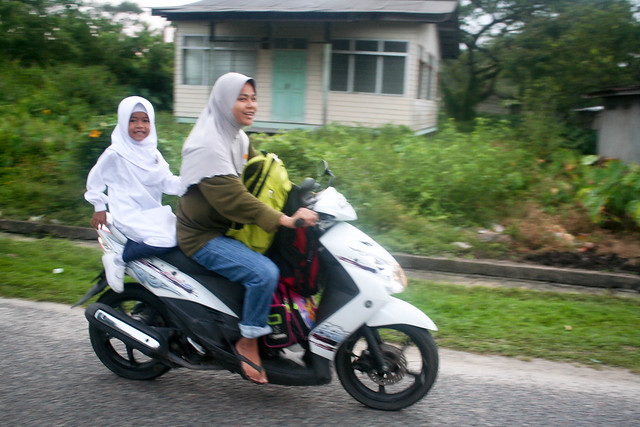 Biking along the beach

From Kota Bahru we headed south on the quiet coastal road, past deserted beaches and sleepy fishing villages.  Few visitors linger in those parts, as most touriosts are more interested in the diving opportunities on islands just off shore.

Camping prospects improved and we stumbled across some lovely spots near the beach– once on the grounds of a local university, another time at a local high school  and even once in the front yard of somebody’s holiday bungalow.  Our favorite spot was on the lush grounds of an agricultural research station.

Few cyclists do much camping in Southeast Asia, but I have to say I’m happy with our choice to pitch the tent as often as possible.  In spite of the mosquitoes, evenings in the tropics camped out under the swirling stars with the sound of the waves crashing in the distance is pure bliss.  Much more romantic than being cooped up in a stuffy guesthouse with a noisy fan whirling overhead. 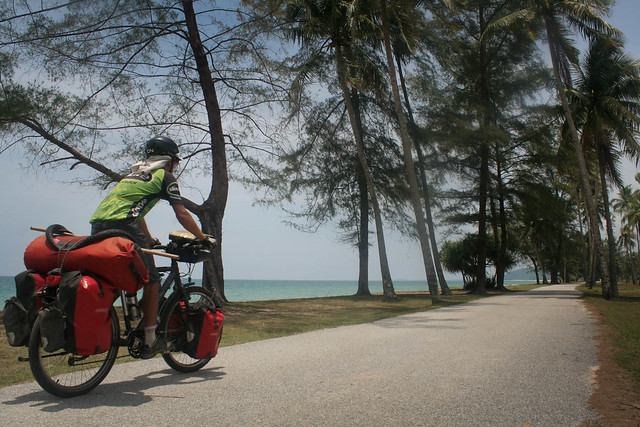 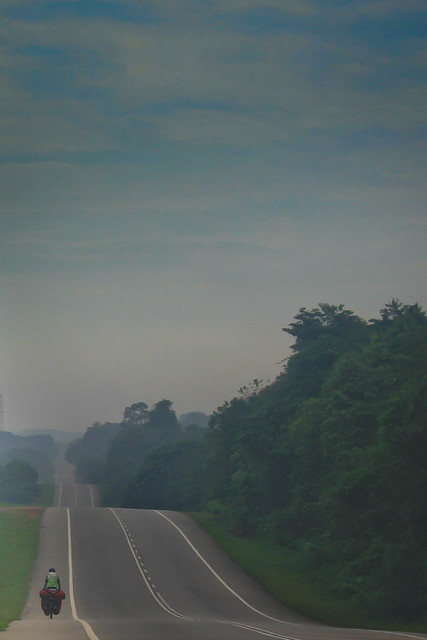 The idyllic side of Malaysia disappeared and with it our streak of problem-free cycling.  First one flat and then another.  On the third puncture of the day (as I lay groaning on the side of the road having just realized that Eric had replaced but 2 of our 4 well-used tires in Bangkok) a car pulls up.

Well-meaning Stranger hops out, offers help.  Foreign Cyclist accepts, realizing his partner has been rendered useless (she appears to have no problem spinning her wheels, he’s noticed, but when it comes to bike repairs she is often struck by sudden back pains, headaches and general malaise.)

The Stranger is a keen assistant, fetching water and filling up the folding bowl in order to find the tiny hole in the inner-tube.  He pumps up the tire with gusto while the Foreign Cyclist takes the opportunity to adjust the brakes.  As soon as the bike is fully-loaded and ready to go, The Woman miraculously revives.  The Foreigners on Bikes thank The Stranger profusely and ride off into the distance.

5 kilometers down the road, they spot The Stranger in the distance.   He is holding two cans of Fen Orange cola high in the air!  The sun is at its highest arc and they are grateful.  A photo is snapped to commemorate the kindness and then The Foreigners on Bikes cycle off to Singapore. 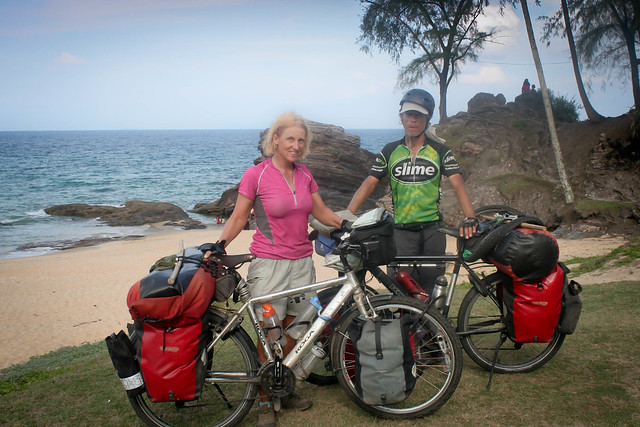 Get in touch at worldbiking@gmail.com

Let us know what you think of the site or share your own bicycle touring experiences in Southeast Asia by leaving us a comment below.

Malaysia Mix: ATM Annoyances, advice from the imam and more

6 thoughts on “Malaysia Mix: ATM Annoyances, advice from the imam and more”

“Aren’t you afraid of the bombs?” Cycling through Thailand’s deep south, this troubling enquiry was tossed out multiple times each...