1)The diversity. You have everything you can wish for in Guinea. (Except deserts – but you´ll find enough sand on the dirt tracks you pedal on…I promise!).

In the south you have the rainforests of the Nzérékoré region and in the center and northeast you have the savanna-like areas of Kankan and Faranah. In the west you have the ocean with everything it stands for. Can you surf here? No idea – but why don’t you find out! And then, of course, you have Fouta Djallon.

2) Fouta Djallon. The rolling grasslands of Fouta Djallon were some of the most rewarding landscapes I encountered on my West African-trip.

Enormous rocks, red dirt roads, caves and waterfalls cover the area which is the highest in West Africa together with the Air Mountains in Niger and the highlands between Nigera and Cameroon. A real highlight was the road from the mountain town of Pita down to the valley floor along the Telimeli road. One of the greatest road trips in West Africa! The area is also the source of the mighty Niger river.

3) The Niger River. If the Nile and the Congo are the king and queen of African rivers – the Niger is the Crown princess.

But instead of more words and pictures – have a look at this video that my travelling partner Helen Lloyd made from our two weeks and 350 kilometer long canoe trip down the river. We were almost all the time in total wilderness, but at a few occasions we encountered some fishermen who were, as everyone in Guinea, very friendly.

4) The friendly people. Maybe Guinea has the locals I liked most on my 2009-10 trip through West Africa. There didn’t seem to be any differences in kindness between the many ethnic groups like the Fula, Mandinka or Susu people – everywhere and every day we met overwhelming friendliness. They behaved with a deep dignity and seemed very well educated compared to many people I met on earlier trips in Africa. Even the children were calmer than their cousins in Senegal, Gambia and Ethiopia. (Well, even the carnival in Rio is calm compared to Ethiopian children – some of you know what I talking about).

So one of the highlights in Guinea was the people – but some stretches had no people at all. Sometimes the roads were empty.

5) The empty road. One of the big reasons why I love cycle touring is not the cycle thing itself, it is about the after-cycle party that begins immediately after the day in the saddle.

You pitch your tent, start your stove (or collecting fire wood in my case) and then the fiesta starts! Soon you sit next to a small camp fire and the red sky turns black and the sounds of the African night surround you. The next day everything starts all over again. And this pure freedom is extra enjoyable if you are in an area without any villages, just you and your own company and the African bush!

Can it be any better? And Guinea has many of those empty areas and roads, more than other countries in the area– which is another proof of the Guinea diversity! 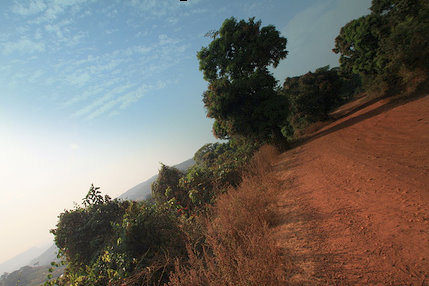 Lars Bengtsson is a Swedish cyclist who has travelled more than 61,000 kilometers in 74 countries. He also spent two weeks paddling down the Niger River in 2010, and has done so-called first ascents of three extremely remote summits up to almost 6000 meters, in a subrange of the Chinese Kunlun-mountains later the same year. Once, he also tried to sail from Sweden to Venezuela but the boat broke down outside Holland during a storm.

His latest bike tour is a journey through the Americas with Helen Lloyd.  More info at www.lostcyclist.com

If you’re not rushing out the door to do a little cycling, why not leave a comment and let us know what you’re thinking.

You could also email us at worldbiking@gmail.com and tell us which country you’d like to write about for the A-Z of Bicycle Touring project.

A collection of our favorite photos from our time bicycle touring in Laos.