The Democratic Republic of Congo seems to have that perfect mix of challenging roads, friendly locals and an element of uncertainty that makes it much-loved by adventure cyclists.  This week, Peter Gostelow gives us his take on this chaotic Central African country.

The eastern provinces of the DRC may be some of the most unstable, but they are also some of the most beautiful.Lush jungle-clad climbs take you up to 2000 metres and above, before you descend to the shimmering blue surfaces of Lake Tanganyika and Lake Kivu.

If you’ve got the money for it you can climb up a lava-spewing volcano near Goma or hang out with the mountain gorillas before crossing into Rwanda or Uganda. For those doing it on the cheap, swimming in the lakes comes free. 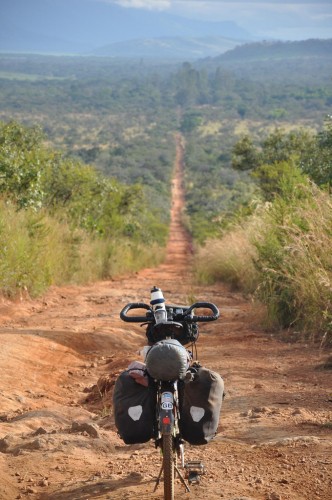 That’s two things, but they kind of go together in the DRC.

Primus beer comes in wonderfully large 720ml bottles and has as good a distribution system as coca-cola (unfortunately they will cost a small fortune in rural areas due to the transport situation).

If the beer is cold it means there is electricity, and if there is electricity then there is usually a stereo or TV where Congolese girls hypnotise the drinker and distract him from his beer as they shake their body to the infectious rhythm of Soukous, a music genre listened to far beyond the borders of the country.

Out in the forest, where there is no electricity and people can’t afford beer, palm-wine and drums make a good replacement. When tapped fresh from the tree palm-wine has a sweet, if somewhat acquired taste. Locals will love it if you drink it (I occasionally filled up a 1.5litre bottle with it). Every village in the DRC will have a church and the rhythmic sound of drums beating in the darkness as you lie sweating in your tent is one that will stay in your memory long after leaving.

When the Belgians left their only African possession they did so with an impressive network of roads, railways, Catholic Churches and other buildings.

Apart from the mission churches, some of which are mighty impressive red-brick edifices, almost everything else is a crumbling and non-functioning reminder of the past. In one sense it is sad, but in another a fascinating window into what life must have been like 60 years ago in the DRC.

Uncover some long grass at the roadside and you might find a stone marker denoting mileage to the next town. Poke your head around the cob-web filled rooms of a large mission and you’ll discover old machinery that would be better placed in a museum.

Then there are the Portuguese names on river-side warehouses, the rusting train carriages being swallowed by the jungle, and the enormously incongruous houses/palaces where former political leaders such as Mobutu once lived. History is everywhere in this country – a place more developed half a century ago than it is now.

The bicycle really is the ultimate means of travel in the DRC as there is no public transport in most of the country. Locals load their bicycles with 100kg+ of goods and often walk for days to sell them in the next town.

On a bicycle you can pretty much take any track that is marked on your map. Sometimes it will be no more than shoulder-width wide, only to suddenly open and bring you to an old-iron bridge crossing a river. Some of these jungle-tracks used to be actual roads when the Belgians were still in the Congo.

Now the jungle has reasserted itself, but because the locals use bicycles to travel along them, you can too. It is an adventure cyclist’s paradise. Should you have a problem you won’t be far from a local with his Chinese-built steed willing to help.

#1  Rivers run through it

The River Congo evokes all of the adventure and mystery of African travel, and a journey up or down this mighty serpent will be like no other you have taken before.

Barges pushed by tug-boats make the 1800km-long journey between Kinshasa and Kisangani, and are effectively floating markets. Families live aboard them for weeks, as that is how long the journey in its entirety will take (there is no schedule and if you travel the whole way you can be aboard for anything between 2-4 weeks).

Going up that river today is just as Conrad described it over 100 years ago – ‘like going back in time’. River-side villages totally cut off from the modern World transport what they have from the jungle and river (ground-nuts, palm oil, dried fish, bats, monkeys) on small dug-out canoes – paddling out to tie alongside the barge as it slowly creeps up the river. It is an amazing spectacle and one not to be missed.

Aside from the main river itself, the DRC has thousands of small streams running through the forest. These make wonderful opportunities for a cool off and break from the sweaty cycling.

In 2003 Peter Gostelow moved to Japan to teach English and two years later began  The Long Ride Home, a 50,000km bicycle journey back home to the UK.

Since returning in 2008, he has used his Photography and experience from the road to speakto a range of audiences. He has also contributed to the Adventure Cycle Touring Handbookand the CTC magazine.

You can follow Peter’s cycling adventures on The Big Africa Cycle.

What’s your take on cycling the Congo?  Any suggestions for other adventure cycling destinations?

Unexpected moments and a vow to give up griping

Admittedly, my initial impression of China was less than enthusiastic.  It’s a great country to gripe about. I could go...