Equatorial Guinea should top any list of obscure countries that deserve a visit.

Inveterate bicycle tourist Lorenzo Rojo shares his reasons for what makes this minuscule Spanish-speaking country plopped down in the heart of Africa worth a detour.

One of the absolute  least-visited, least-cycled countries in the world.

#4  A taste of Latin America on the African Continent

Have already cycled in Latinamerica? Liked it?
This small piece of Africa will make feel you, in some aspects, like you’re back on that continent. Equatorial Guinea is a former Spanish colony and that language is still widely spoken in this tiny West African nation.
Communication will be one of your biggest challenges.  But if you know a little Spanish–or one of the local languages– you’ll be able to get by.

Like paradoxes? You will be in one of the richest and poorest countries of the world, governed by a corrupt dictatorship but with very good relations with the big “democratic”” countries.
The reason? The usual one…

Things are not as bad as some travel guides say (or used to say…).
Bata is a nice and quiet place, roads are improving, checkpoints are not as tough as they used to be.
Still you will need patience and tenacity (to get the visa, for example).

#1 An awesome way to enter the country

The estuary of the Muni river is one of the most beautiful of Africa (or,  the world for that matter).
And you have to navigate it either to enter the country if coming from Gabon (Cocobeach-Kogo) or to exit it if going on the opposite direction.   A really beautiful and adventurous introduction to Equatorial Guinea. 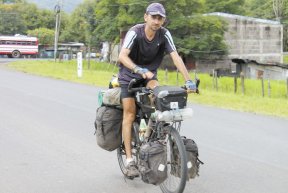 About the author
Lorenzo Rojo hails from the Basque Country, Spain.
Until 1997, he was a high school teacher of Basque language and literature.
That year he left his job and embarked on a much awaited and very little planned bicycle trip.
He was 35 at the time.   Now–almost 14 years late– he is still on the road, not something that he was expecting when he set off!
So far, he’s biked across five continents, pedaling more that 150,000 kilometers through 80 countries.
He travels with an old bicycle, little money, but lots of  motivation.
At present, he is cycling the Americas.
Follow along at:  www.munduanbarrena.blogspot.com
Top 5 reasons to Cycle Equatorial Guinea

The Democratic Republic of Congo seems to have that perfect mix of challenging roads, friendly locals and an element of...