When I cycled Baja California, I rode South from the US border in Tijuana, along the Pacific coast and then followed the main road the length of the peninsula to La Paz. The road zigzags from the West to East coasts of the peninsula, but this way you get a great impression of the varied landscapes and coastlines.

A real highlight is the Central Desert. I then did the little loop of the tip to Los Cabos and back to La Paz where I flew back to Tijuana and home. I rode this long solitary road in September 2006. It took me 4 weeks to ride 2200km. September is just about the hottest month to do Baja and not recommended.

Other months have more bearable temperatures, plus in December-March time you have the gray whale watching season in the bays and lagoons around Guerrero Negro, but this is high tourist season. A hurricane also passed just south of me towards the beginning of my trip, destroying many of the campings I was aiming for later on my trip.

Fortunately it had no effect on my trip. In fact, it was a blessing, because sections of the road ahead were damaged, reducing traffic travelling the length of the peninsula.

Now, the 5 reasons why you should go bicycle touring in Baja California:

1)      Open Space. Much like riding in any desert, the beauty in the solitude and the wide open spaces is magical. The sky appears to wrap itself all around, drawing you further and further into its horizon.

The Baja desert has its own special aura though, with its majestic Cardón cacti standing over 15m high and scattered everywhere between large rounded boulders. This incredible scenery then plummets suddenly into the azure waters of the Sea of Cortez (Gulf of California) where the native brown pelicans swoop and dive elegantly to catch fish for tea.

The speed at which one cycles through this landscape, allowing one the time to soak up all these happenings, means that bicycle touring is the only way to experience Baja California.

At the end of a long hard cycle, there’s nothing better than parking up under a palapa in one of the many white sandy coves along the gulf’s coast, especially in the Bahía Concepción, and diving into the bath-like waters.

If you’re lucky, you’ll meet other campers on the beach preparing a delicious BBQ spread of tacos and local fish caught in the bay, who are more than welcoming to weary cyclists emerging from the hot desert to this paradise of tranquillity. Spend a while relaxing here and beg, steal or borrow a kayak to paddle out to one of the many rocky islands for even more solitude.

On a number of occasion on the Baja peninsula, you get to the flat plains that seem to stretch for miles. Here the road goes as straight as an arrow towards the horizon, often with an endless line of telegraph poles running its length. Plug Dire Straights’ Telegraph Road into your ears and enter the zone. It’s a surreal experience to get your head down and power along with these man-made objects whooshing by, seemingly endlessly.

From crazy Tijuana in the North to a more placid La Paz in the South, the tacky American spring break-like glitz and glam of Cabo San Lucas to the old and forgotten about French and Spanish colonial towns of the central desert, every town you pass through has something new for you to feast your eyes on.

Sit and relax under palm trees around the lagoon at the Oasis of San Ignacio and visit the beautiful old Spanish church built in 1786. Then make sure to stop in the old French colonial town of Santa Rosalía, check out the bakery and marvel at Gustave Eifel’s church from the Paris World Expo of 1889.

Finally, make sure to enjoy a delicious street-side taco from a little corner stall in La Paz and enjoy the sunset from the promenade as it goes down over the Bahía de La Paz casting all the moored boats into ghostly silhouettes.

I think this goes without saying almost anywhere you travel in the world, especially in more rugged and extreme landscapes.

I remember struggling up this long hill in the late morning heat, to find a little truck stop selling ice cold Cokes at its top. I never got to buy a Coke, because the cute old Mexican lady working there was just cracking open a fresh water melon and offered me half of it.

On another occasion, I arrived soaking wet and tired from a day of terrible weather (due to a hurricane further South) in a little hamlet, where this family invited me in to dry off and relax on their veranda and play dominoes with their children. Everywhere you stop people come up to you with the same friendly curiosity to know where you’re coming from and travelling to. Once, this vaquero (cowboy) even stopped to compare his horse with my Koga Miyata World Traveller.

I swear there was a slight pang of jealousy there in his eyes. 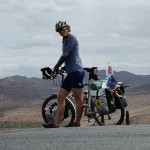 Andrew is a British expat who grew up in Luxembourg.  This summer he starts a MSc in Economics at the Stockholm School of Economics after graduating from an International Business degree at the Copenhagen Business School.
His passion for bicycle touring started when he met a Swiss/Dutch couple cycling the Panamerican highway whilst he was on a backpacking tour of South America in 2001.
He has ridden two major tours since, one (solo) the length of the Baja California peninsula in 2006 and one (with his best mate) around Norway and Sweden in 2009.
He also got involved raising funds for DownRightKenya (www.downrightkenya.org) and joined the team as they rode through Luxembourg and Germany back in 2008.
Andrew has a passion for skiing and has worked two ski seasons, one in Sierra Nevada, Spain and one in Laax, Switzerland, and he regularly organises ski tours for students and business colleagues.
His ultimate dream would be to one day cycle the Panamerican highway from top to bottom.
Photos of his tours can be found here.
Top 5 Reasons to Cycle the Baja Peninsula

4 thoughts on “Top 5 Reasons to Cycle the Baja Peninsula”

This is a guest post from the Permacyclists,  Anna Vinois and Dave Meyer. Reason #1 : The space Botswana is...