This is a guest post from the Permacyclists,  Anna Vinois and Dave Meyer.

Botswana is a paradise for the claustrophobic.  No matter which region you decide to tackle, you can expect long stretches of vast, three-hundred-and-sixty degree open space, entire days without any significant towns and the rarest of all: a truly blue sky in every direction without a trace of pollution.  Whether it is salt flats, scrub brush, or even seas of sand-dunes, nature on a scale most people can barely imagine is what awaits in Botswana.

Of course, for the touring cyclist all this space comes with a catch: you have to be totally self-contained to bike here.  Don’t forget your camping gear, but most of all your extra water containers: you’ll probably get just one chance a day to fill up, so be prepared to make the most of it! 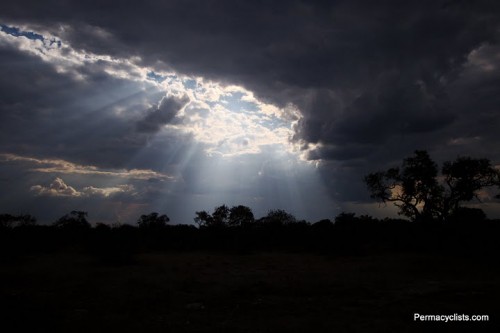 You will need a tent, a stove, extra water containers, spare tubes, a repair kit, and dozens of other small bits of gear that will clutter up your panniers if you want to cross Botswana; and then every so often you will pass through a village or a rock-painting site and be reminded of the land’s original inhabitants, the San, or Bushmen, who made this country home for millennia without any such luxuries.

Forget The Gods Must be Crazy, these are real people struggling in the twenty-first century to preserve a way of life that dates back to the very origins of humanity.  It’s a struggle that few expect they will win, with their traditional lands and water sources being steadily co-opted by the Botswanan government and international mining concerns.  And yet from the slow, regular pace of a bicycle, the San are clearly still a presence.  Sites like Tsodilo Hills, D’Kar, and the Central Kalahari Game Reserve all bear witness to the long arc of their history: from ancient rock artists to modern tourist curiosities and political pariahs.

Botswana is one of the few places where this essential link to the human past is still present. 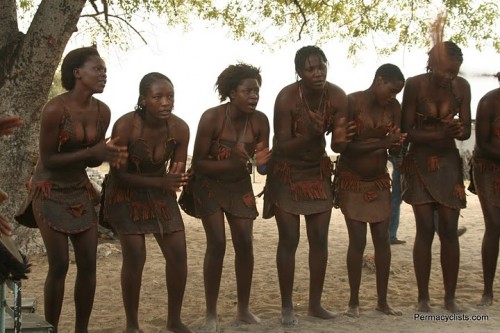 If there is one word which Botswana brings to mind for most people, it is: Kalahari.  Less well known is that every year the center of this semi-arid region becomes one of the most fertile and diverse wetlands in the world as the Okavango river, flooding from seasonal rains in Angola, slides its wet embrace out over the sand.  The fact that the water doesn’t just dry up or disappear is another testament to the truly unique nature of this phenomenon.

Once a year, the flooded delta becomes a magnet for wildlife; elephants, buffalo, antelope and even lions are common sites along the roads.  Moreover, for the cyclist following the river down from Namibia, each night’s stop makes for a new view on the water, with villages either abutting the floodplain or seemingly lost in a valley of brush depending on the season.

Life in northern Botswana fluctuates with the flooding of the delta, and if your tour is well-timed, you have the experience of a lifetime awaiting you. 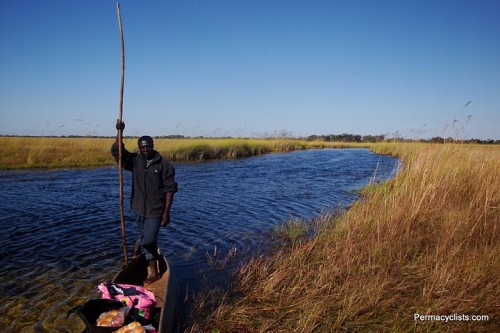 One of the persistent questions of long-distance touring is where you will spend the night.  In Africa, we slept in schools, hospitals, rat-ridden guest houses, luxury resorts, village squares, huts, and every other sort of lodging or camping place imaginable, some pleasant, some not so much.

In Botswana though, every night was spent under clear star-filled skies without any light or noise to disturb us beyond the occasional truck on the nearby highway.  While wild animals can be a problem in some areas (particularly in the northeast, near the Zimbabwe border), in most of the country camping, if done safely, is the best sleeping option.  If you’re reluctant, camping at police checkpoints is a great way to ease yourself into bush camping – and no need to worry about the Botswana police, they are trustworthy and professional and can prove a passing cyclist’s best friends.

During the dry winter season, camping can mean waking up with frost on the bikes and frozen water-bottles, so be prepared for serious cold.  At any time of year though, be ready to just pull off the road at the end of the day and pitch the tent in peace.

And the best part?  Botswana is one of the most expensive countries in the world for tourists, but if you are ready to bush camp, you can visit this otherwise un-payable paradise for almost nothing. 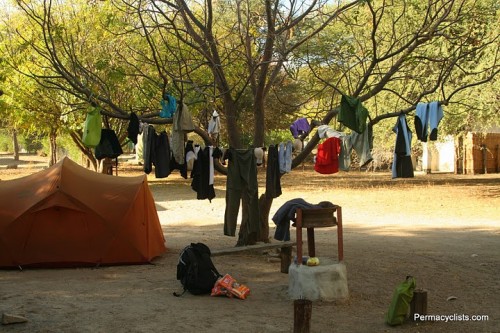 Botswana is no one’s idea of a culinary paradise.  Restaurants are few and far between, and vegetarians should expect to subsist on cans of baked beans picked up at the ‘tuck shops’ that line the way.  At the same time though, the Setswana have a proud heritage of cattle herding and the country is a major beef exporter to Europe and South Africa.

Cows are herded across the desert to bore-holes and water-points in a seasonal rhythm that is evidenced all along the roads, with herds and their guardians, rifles slung over their shoulders to protect against lions, steady companions during the dry season; the same animals line the banks of the Okavango delta during the flood.  Botswanan beef, when well-cooked, is tender and flavorful and just the sort of slow food experience that only the touring cyclist can experience.  This isn’t the corn-fed factory-raised beef so common in Europe and the US, it’s a precious resource gleaned from the scarce grass of one of the world’s great deserts, and it shouldn’t be missed! 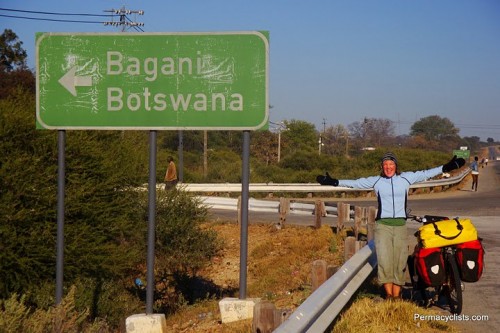 Belgian Annabelle Vinois and American Dave Meyer are two ordinary city slickers who quit the real world to bike around Africa.  You can read all about their bicycle adventures as well as learn more about issues which intrigue them, notably the environment and ecologically sustainable agriculture, at www.permacyclists.com.
Top 5 Reasons to cycle Botswana:

And so Pass the Days: a dispatch from Bolivia

Our two big Andean adventures (Paso Sico and the remote Southwest Bolivia ride) left me with more than some nice...