Patagonia at last!  Gone are the rolling hills and pine trees, the small towns with their delicious factura-filled bakeries and quiet parks.   Patagonia is a windswept land of wide-open spaces, hardy sheep and long, lonely roads.   The glaciers and lakes and natural beauty for which Patagonia is so famous lie far to the west, shoved up against the Andes.

We’re winding our way down Ruta 3, Argentina’s coastal route to Ushuaia.  This–far less famous–part of Patagonia is a virtual desert.  Roads signs warn of sand spreading across the highway and reduced visibility due to all the gunk being stirred up by the ever-present winds.

Riding is tough.  The winds are seldom on our side.  Huge trucks rumble by, blasting us off the road.

Settlements are few.  When Argentines say there’s nothing out there, it’s best to take them for their word.

The barren plain stretches on, unbroken, as far as the eye can see.  Not even a lonely ranch house or a hopeful water tower dot the horizon.   Nothing but scrubland.  Even the sheep have deserted some harsh stretches of Patagonia.

Riding Ruta 3 through Patagonia requires as much determination as taking on the lonely stretch of the Sahara that runs through western Egypt.  More determination, perhaps, since Ruta 3 rarely rewards you with landscape that can be described as anything but bleak. 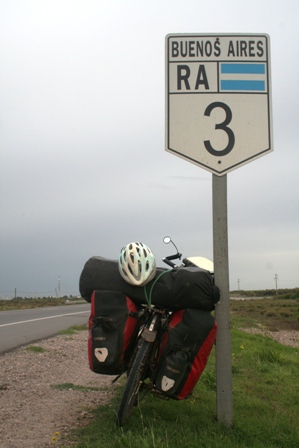 Patagonia officially begins as soon as you cross the Rio Colorado, some 700 kilometers south of Buenos Aires.

I swear it was as though somebody switched on a high-powered hair dryer as soon as we passed the Welcome to Patagonia road sign.  We got blasted.  Sometimes from the south, at times from the east, but usually from the west and never from the north.

We don’t deserve this wind, I whine.  I hate Patagonia! 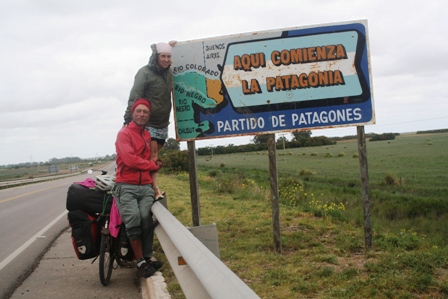 Two days at the home of super-awesome, incredibly kind couchsurfers Betty and Sergio, and we’re back smiling and ready to take on all the force of the Patagonian winds.

Unfortunately, the positive couchsurfing vibes don’t last long.  We say our goodbyes to Betty and Sergio and set off early, knowing there are vast distances to cover.  Soon we are dispirited, running low on water and in need of rest.  We struggle on and on against a vengeful wind until late in the afternoon, hoping for signs of life.

Our average speed is down to a miserable 9.2 kilometers per hour.  There is no hope of reaching San Antonio, still more than 80 kilometers away, before nightfall. 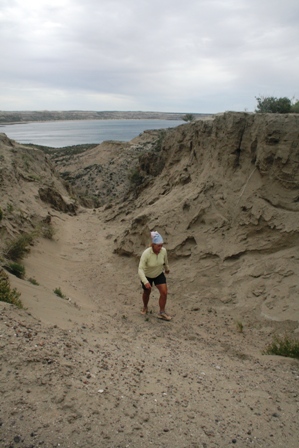 Finally, we resort to flagging down motorists.  Is there a ranch ahead?  A small settlement perhaps? The response is always the same.  No, sorry, nothing out here. Then the friendly Argentines offer us some water, wish us luck and screech off into the fading light.

Surprisingly, this does not drive me into despair.  Camping by the road is always an option.  Of course, on this desolate stretch of the planet there’s no possibility of hiding the tent, but Patagonia is safe enough.  The kind motorists have offered us water and we’ve stocked up some 3 liters between us.   The  wind gusts up ferociously now and again, but not enough to tear up the tent if we tie it down tight.

I’ve almost resigned myself now to a night on the lonely pampa. It won’t be too bad, I reason.  We can huddle together in the tent, break open our reserve can of tuna and feast on that.  By morning perhaps the wind will have died down enough so that we can fire up the stove for a cup of coffee.

My plans are foiled.

But then an old flatbed truck pulls off to the side of the road some 150 meters ahead.  As we pedal up, the driver leans out the window and offers us a ride.  Eric shoots me a glance, I nod, and that’s it– we succumb to temptation.

With the bikes strapped down, I wedge myself up against some large piece of machinery, hold on tight and pray we won’t hit any bumps.  This is not the safest mode of travel.

We fly down at the road, past all the nothingness that would have taken the better part of a day to conqueror on a bike.  I gaze up at the stars that are slowly starting to punctuate the sky and consider the lift.

Taking a lift is hardly such a serious transgression as to merit hours of deep contemplation.  But a part of me feels deeply disappointed in my weakness.  Try as I may to justify taking the easy way out, I can find no good reason for hopping on a truck.  There was no imminent danger of running out of food or water.  The road was in perfect condition.  The wind was hardly the fiercest we’d encountered.

But still I fret.  My great fear is that taking a lift is some sort of gateway drug.

Just as an occasional marijuana user might end up as a crack head, I fear taking an occasional lift may lead to ditching the bike and signing on for a 14 day all-inclusive whirlwind bus tour of South America.

And that would be a catastrophe.  I don’t ever want to end up clipping on a name badge and scurrying behind  some cheerful tour guide in a floppy hat as she leads me and 30 other ‘adventure tourists’ around Machu Pichu.  That’s not for me.   I’d rather be holed up in a cubicle with my eyes glazed over, staring at a computer screen.

But, I have to face the truth.  I no longer find pleasure in suffering.  That jolt of enjoyment once triggered by a strong dose of pain and distress vanished somewhere south of the equator.

I can barely conjure up the psychological fortitude to continue pedaling through barren and boring landscapes.  Finding that last ounce of willpower is like scraping the bottom of the jar for the last teaspoon of jam.

In early 2008, we took six months off from serious riding and puttered around India.  I returned to Africa revitalized and raring to go for the ride north to Egypt.  That kind of rest is exactly what I’m in need of now.

Unfortunately, the far tip of Patagonia is almost as far south as Antarctica, and can be visited comfortably just 3 or 4 months of the year.  Now’s our chance to reach the southernmost city in the world and we don’t want to blow it.

So here’s the plan.  A little bit of motorized help during the next desolate 2,000 kilometers stretch to Ushuaia.  That will save our sanity and ensure we don’t give up all together and jump on a plane to Delhi.

Once we reach Ushuaia (and all the stunning landscapes that make you actually want to be on a bike) we’ll make our way slowly north through the Andes to Bolivia.  Then it’ll be time for a well-deserved break.

Long live lifts!  Down with lifts!  I say make the most out of every minute of life, lift or no lift.

Pedaling to the end of the world

14 thoughts on “Pedaling to the end of the world”

A Change of Mood

Despondency is dead.  At least for the moment.  Bicycle touring has its ups and downs and that feeling of ‘I...