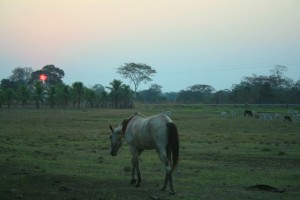 A last look at brazil..beautiful camping and cycling

“Travel is an art which has to be created by the traveler.”

Biking the Chaco embodies all that I despair of in bicycle touring.  It’s remote, life is unpredictable, there’s a Wild West feel to this desolate patch of scrubland.  There’s no food, no comforts, no medical help.  Jaguars hide in the hinterland.

The Chaco attracts intrepid adventurers who thrive on uncertainty.

How’d we end up there?  Careless planning.

I liked the ring of ‘The Chaco.’  It sounded romantic.  I was vaguely aware of a land of vast open spaces and stunning bird life.  I imagined quiet roads and quaint villages.

What I got was a rough track and a largely uninhabited wasteland.  To be fair, I’m sure the Chaco is quite beautiful when it’s not burning.  Unfortunately, we showed up just when the Bolivian government had declared a state of emergency due to the uncontrolled fires sweeping the region. 3.7 million acres destroyed, declared the headlines.

Not the ideal spot for a bicycle tour.

We bungled Bolivia right from the start.  First, we got all tangled up in the border crossing from Brazil.  After 4 years on the road and some 200 accumulated border crossings behind us, you’d think we’d get it right.

But no.  We’re getting sloppy.  For some odd reason, we assumed the passport stamping process would take place at a little office located at the actual border.  This having been the case in 99% of all other borders we’ve encountered.  Not so between Brazil and Bolivia.  You’ve got to check out with the Brazilian authorities in the town of Caseres, some 100 kilometers before you reach the Bolivian immigration authorities in San Matias.  Who’d have figured?

You can wander freely between the two countries.  But when you show in San Matias, on the Bolivian side, track down the Office of Immigration and ask for an entry stamp, you’ll be directed all the way back to Brazil.  Sorry amigo, no exit stamp, no entry stamp.  Simple as that.

Don’t bother trying to be clever by sending one person pedaling that 200 kilometer round trip journey back to Brazil  to get the passports in order.  The Brazilians are sticklers for details and one live body showing up with two passports just won’t do.

Alas, another trip back to Brazil (BOTH of us) and finally we are blessed with the coveted exit stamps.  The Bolivians stamp us in, and voila, we’re legal.

Sometimes it pays to READ the guidebook.

So that’s what happens when you think you know the ropes and get sloppy with your planning. Three days wasted just trying to get the proper stamps in the passport.

Biking Bolivia is off to a really bad start.  And the thing is, bad ‘luck’ likes company. So there we are bouncing along another dusty track, keeping an eye out for jaguars.  And bandits.  Seems this little corner of eastern Bolivia is known as a ‘Zona Roja.’  Prime drug smuggling territory.  And whatever else comes with that.

We’re relieved to reach the first little village, Las Petas, some 90 kilometers from San Matias.  We ask around about camping at the police station.  A weathered old cowboy informs us that outside of  San Matias there are no police in the entire province.  “Got chased away,” he chuckles.  “We settle things ourselves these days.”

“But what about the military.  Don’t they keep order?”  The man looks at me like I’ve got the brains of a llama.

“The military? Humph.  The get a cut from the smugglers.”  I get the picture.

We’re taken in by the local medico.  He’s struggling to keep the small health center afloat and it’s not easy.  There’s no electricity, no running water and his equipment amounts to a stethoscope and a rusting scale.

The following day we set off before dawn and it’s not long before a pickup pulls over in a cloud of dust and an old rancher shouts out, “Remember me?”

I do.  It’s the guy who gave us the lowdown on the police and military.

I  do.  The Chaco, due to all the advancing fires, is veiled in a thick cloud of dust and smoke.  I’m having coughing fits like a patient in a TB sanatorium.  The landscape reminds me of the bleak shots in the apocalyptic film ‘The Road.’  I, too, feel like the world is coming to an end.

I want a ride.  And I take one.  A guilt free ride in the back of a pickup that shaves a whole day of suffering off our ride to Concepcion (where the tar road takes over!).  I miss out on cycling a bumpy road  through dreary countryside.  I don’t get to anguish over depleting food supplies.  I don’t have to wonder where we’ll next be able to fill up on water.  And I don’t squander precious time doing something I don’t want to be doing.  Namely cycling the Chaco while it burns.

This realization is one of the greatest epiphanies of the trip.  We are all free to do exactly what we want to do.  There is no cycling taskmaster forcing me to bike a 100 kilometers daily.  No Bicycle  Touring Overlord who will punish me for taking the easy way out now and again.

You’d think I’d have figured that out long ago.

Yet I’ve spent a good part of the last four years trying to live up to some arbitrary standard of cycling adventure.  I believed that hitching a ride on the back of the truck was only for wussies and wimps.  Weaklings.  Cyclists without stamina or drive.  Rides were for those lacking the determination to see things through.  People who can’t stare down boredom and pain and suffering. Real cyclists never take lifts.  NEVER.

Or so goes the myth.  I like to think I’m a real cyclist.  A real cyclist who takes lifts now and then.  And doesn’t regret it.

So with a little hitchhiking help we tackled the rough 400 kilometers of dusty track in two days and a half.  Bouncing around in the back of a truck with a crazed driver at the wheel is not all that fun, so there’s much of a chance that we’ll make hitchhiking a regular thing.  All in all, nothing beats biking.

Tagged on: Bolivia    favorites    the Chaco

“Which way now?” “I dunno.” The road suddenly split into two and we were stumped.  One narrow dusty track continued...