Iran is one of the most misunderstood countries on the planet.  Almost everyone who has the opportunity to visit Iran,  falls in love with its warm and generous people.  The country certainly has its challenges, but there are many misconceptions about life inside the Islamic Republic. 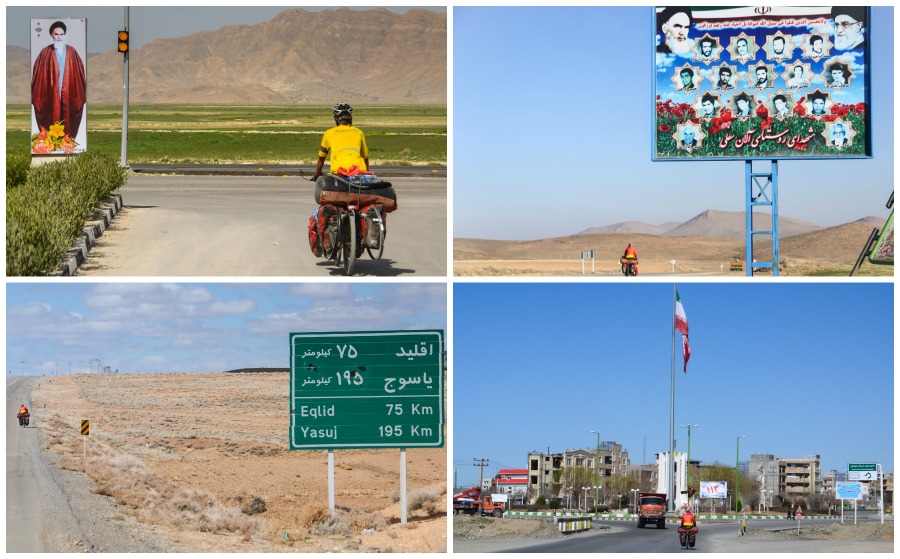 With today’s technology it is possible to break away from the big highways.  Using open source street maps and the excellent Maps.me offlinemaps app, we were able to chart routes avoiding some of Iran’s busiest and most treacherous roads.  Iran has a comprehensive network of secondary roads, most of which are paved.  If you ask locals for route advice, they will undoubtedly steer you towards the main highway.  They’ll likely tell you that the less travelled road is ‘dangerous’ or doesn’t offer any services.  Ignore this nonsense.  Even the tiniest village will have a shop selling basic supplies at reasonable prices.  Off the main routes you won’t find hotels but don’t let that deter you.  In Iran,  some kind soul will inevitably invite you home for the night.

Myth #2:  Iranians are scary, fanatical people who don’t like Westerners–particularly Brits and Americans.

Nothing could be further from the truth.  Iranians are incredibly welcoming, unfailingly hospitable and insanely curious about the West.   As a foreign visitor you will be showered with endless (and undeserved) kindness.  Locals will pull over to offer you gifts of fruit and sweets.  Shopkeepers and restaurant owners will refuse payment (but always attempt to pay at least three times, before accepting the gift).  Iranian families will invite you home to spend the night, prepare a special feast in your honor and send you off with goodies to keep you fueled during your next leg of cycling.  We’ve cycled in 102 countries.  Iran ranks #1 for hospitality. 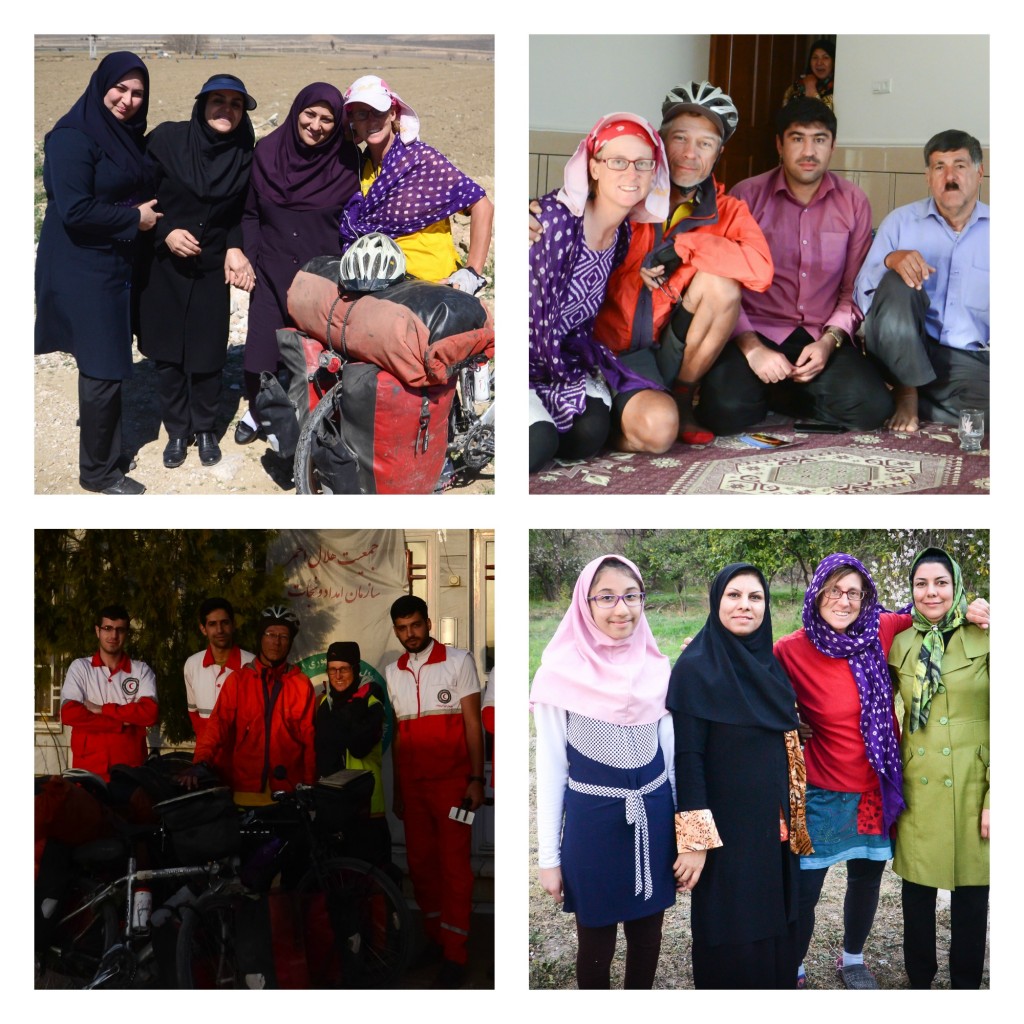 Myth #3 Most of Iran is featureless desert.  The landscape is dull and uninspiring.

Apart from the low-lying coastal regions, much of Iran sits on a high plateau surrounded by craggy peaks.  The Zagros Mountains run the length of the country and boast several summits over 3,000 meters.  Most of our time cycling Iran was spent above 1,200 meters, surrounded by rugged hills and beautifully barren landscapes. 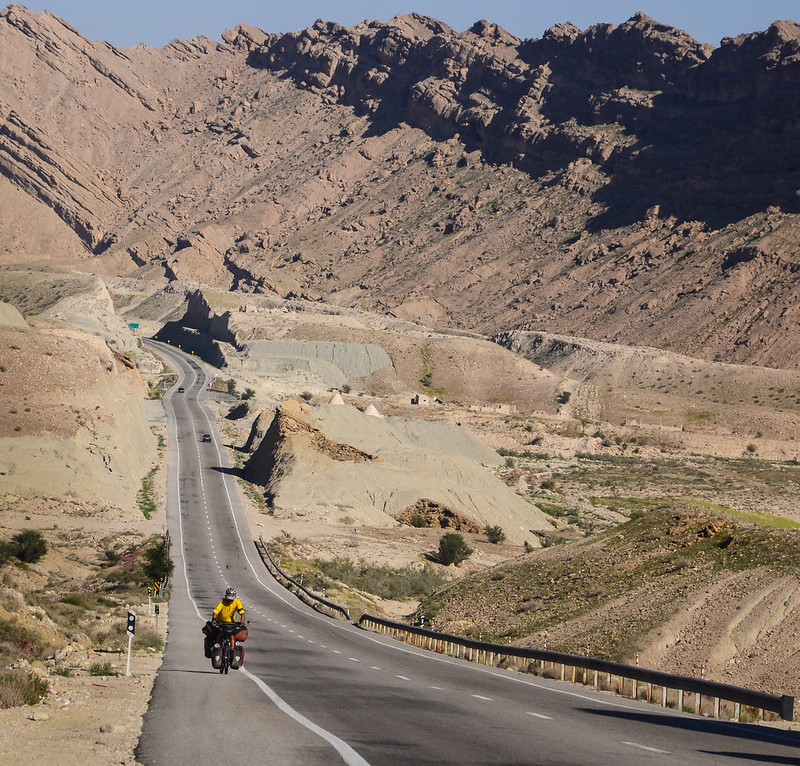 Myth #4 Iran’s climate is hot and dry most of the year.

Iran is a big country—three times the size of France and four times the size of California.   Naturally there are considerable differences in climate from one region to the next.  We toured Iran from mid-February to mid-March.  Arriving via the ferry from Dubai to Bander Abbas on Iran’s southern coast, the weather was mild and pleasant.  A few weeks later, as be pedaled north of Shiraz, a chill set in and by the time we arrive at the border with Turkey on 19 March, we were caught in a snowstorm.

The best times to cycle Iran are spring and autumn when you can avoid extremes in temperature.  Women in particular, will find summer cycling challenging as they are forced to cover up and comply with Iran’s version of the Islamic dress code.

Myth #5 Iran is a dangerous country.

Criminality is no more common in Iran than it is in most Western countries.  Crime targeting tourists is extremely rare in Iran and the Islamic Republic does not currently suffer the instability plaguing many of its neighbors.  Police may stop you but that’s usually just to wish you a warm welcome to their country.

Myth #6 Iran is an expensive country to visit.

Of course how much you spend depends on how you like to travel.  For us, Iran was one of the least expensive countries we’ve ever visited.  During our 30 day stay we spent just $200.

Fruits and vegetables are very cheap (and tasty) in Iran.  We mostly self-catered and could easily get by on $3-$4 per day. A kilo of tomatoes costs around 40 cents, enough bread to fill the stomachs of two hungry about 50 cents, 400 grams of feta cheese $1, delicious cream puffs and cakes from around 30 cents.  A simple meal in a basic restaurant will cost around $2.

Avoiding hotels is extremely easy in Iran.  Many Iranians are members of Couchsurfing  and Warm Showers so you can always find someone to host you in larger cities.  If you just wander around any city or town late in the evening, someone is bound to invite you to their home.

This spontaneous hospitality is always appreciated, but can become draining unless you delight in being the center of attention.

In sparsely inhabited areas, pitching your tent shouldn’t be a problem.  You can also camp in city parks where there is usually a watchman on duty.

Perhaps the best option for shelter is the Red Crescent Rescue Stations found scattered along the main highways. You’re guaranteed a warm welcome, a hot shower and a quiet, comfortable place to rest for the night.  Red Crescent staff are used to receiving touring cyclists and some stations even have guest books.  The guys generally enjoy practicing their English and learning more about cyclists’ travels.

Myth #7 Travel to Iran is highly restricted.  It’s almost impossible to get a visa.

Most European travelers won’t have any difficulty obtaining a 30 day visa to visit Iran.  In most cases you will need to apply for the visa via an approved travel agency online.  We used Caravanistan (who actually outsourced our request to Key Persia) and obtained our visas in Dubai without any problem.  Cost was $35 paid via paypal.  The online application processing and approval from the Iranian Ministry of Foreign Affairs took less than 10 days.

We received an email with our approval code, went to the Iranian consulate in Dubai, filled out another application form, submitted 2 photos each and paid the Iranian visa fee.   We received our visas the following day.  We were not fingerprinted or asked about our itinerary and did not need to provide proof of hotel reservations, onward travel or insurance.

All in all, the process was much simpler than we expected.  Note that women must have their hair covered in the visa photos.  There is a photo shop and ATM near the Iranian consulate in Dubai, just ask for directions at the embassy.

At the time of writing, Americans, Brits and Canadians are only allowed to visit Iran as part of an organized tour.  With warming relations between Iran and the West, these restrictions may be removed in the near future. If you’ve got the money to spend, it is possible to organize a guide to accompany you on a tour of Iran. Get in touch with Americans Jocelyn and Mike of Father Daughter Cycling Adventures  to find out how they did it.

Myth #8 Women are not allowed to cycle in Iran

Admittedly, I never saw another woman riding a bike in Iran, but it’s perfectly legal to do so.  The only trouble for a woman cycling in Iran is adhering to the dress code in hot weather.

Fortunately, women in Iran are not required to wear a burka or chador (that’s Saudi Arabia, where the government really is fanatical and women really are forbidden from riding bicycles).

The essential thing is to make an effort at keeping your hair covered.  When off the bike, I wore a scarf I picked up in India.  While riding I wore my regular old safari hat or sometimes a balaclava (ski mask) when it was really cold.  It’s okay to let a few locks show…just check out Iranian women and follow suit.

Officials forbid you showing the sexy flesh of your arms or legs, and your bum should be covered by a long loose-fitting garment.  In urban areas, Iranian women are very fashionable and push the dress code to the limits, just barely covering their bottoms and wearing tight jeans and leggings.  Some women even dare to wear figure-hugging tops with sleeves that go just beyond the elbows.

It’s best to stick to the rules, but foreign women are usually cut a bit of slack.

19 thoughts on “7 Myths about Cycling Iran”

A blogging break Our last update was from Bangladesh.  That was almost 12 months back. Since then, we let the...