The Maori people paddled  their canoes to New Zealand’s shores some 700 years ago.   Descendants of these early settlers still populate the East Cape.

The East Cape sometimes gets a bad rap.  Concerned New Zealanders from other parts of the country urged us to watch out for the biker gangs.  We were warned not to stumble too far off the beaten track lest we wader onto somebody’s marijuana patch.  And we were cautioned not to pitch the tent where unpredictable youths mightcome across us in the night.

As you might imagine, I was just a touch on edge as we cycled past the holiday homes and beachfront hotels of Ohope and began the journey around the East Cape.

I’d recently re-watched  Once Were Warriors.  If you haven’t seen the film, it’s a sometimes hard-to –watch chronicle of violence, alcoholism and gang life in one Maori community.

Images of a violent Jake The Muss (the film’s tough guy lead character) were invading my thoughts.  It’s just a movie, I told myself.  We’re safe.  It’s New Zealand, not Somalia.

The East Cape is surely one of the world’s best coastal cycling routes.  Highway 35 hugs the coast for some 400 kilometers and dips and dives over headlands jutting into the sea.  There are peaceful coves where lone fisherman cast their lines and tiny settlements with not much more than a general store, a pub and perhaps a church or school.

Tourists are few and traffic is light.  Best of all, the locals are lovely.

Sure, we crossed paths with some rough looking dudes decked out in leather jackets covered in what is certainly gang insignia.  But they didn’t hassle us.  The East Cape locals we met were some of the nicest we’ve encountered in all of New Zealand.  And that’s saying a lot.    New Zealanders, I must point out, are some of the friendliest and most hospitable people we’ve met in all of our almost seven years of travel.

On our first evening cycling the East Cape we were invited to the home of dairy farmers Eddie and Jill.  Eddie told us the land he farmed had been in his family for more than 700 years.  Many of his relatives had migrated to Auckland, others had gone abroad.  But Eddie loved the land of his ancestors and had no plans to leave.

The following day was a series of endless climbs.  In fact, that seems to be what most of New Zealand cycling is all about.   The hills aren’t particularly steep, or long –but after six or seven hours of ups and downs we’re knackered. 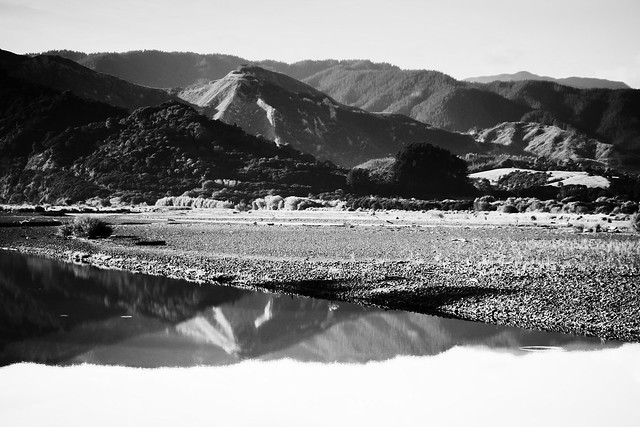 That night we camped at the home of another farming family. Again, they welcomed us warmly and hesitated for not even a moment before inviting us on to the property to pitch the tent.

In the morning we awoke to strong winds.  The tent was shuddering under the force of the gusts.  Hills AND wind.  All we needed was rain.

Another tough day of unrelenting hills was made a bit more bearable by the presence of peaches.  Yes, peaches.   In another unexpected act of kindness, a local woman thrust a bag of fresh fruit at us and bid us a safe ride.  Spurred on by all that sugary goodness, we muscled up the next few hills with a bit more enthusiasm.

In spite of the energy boost, it was well past dinner time when the cycling finally came to a halt for the day.  We’d told ourselves just 10 more kilometers.  Those final 10 kilometers, it turned out, claimed almost an hour of our day.   Our weary legs were revolting.  Give us rest! They insisted.

And rest is what they got.  Inside of a cozy caravan.  Thanks to a warm-hearted grandmother named Katherine.

Katherine had seen many changes during her 68 years.  There was a time, she told us, when the Maori language was banned in public schools.  Sadly, her own son had grown up speaking only English.  Her grandchildren, on the other hand, had grown up in a more enlightened period when both English and Maori  were taught at school.  Katherine remembered the days when Rastafarian gangs wreaked havoc on the East Cape.  Days when home invasions were not uncommon and cousins might rob cousins.

Things had quieted down now she said.  One of her distant cousins is a member of parliament.  Another one’s in the police force.  The East Cape is a peaceful place for the most part.    Sure, a farmer’s sheep might go missing from time to time.  And you’d still want to keep a few guard dogs on your property, just in case.

On our fourth day of East Cape riding (another tough one of hills and headwinds) we rolled into Wainui Beach near Gisborne.  We’d left the sleepy Maori heartland behind and been spit out into prime tourist territory. We’d left behind sleepy towns, pristine beaches and rolling farmland for a place of million dollar beach houses and swanky restaurants with a view.

We’ve spent almost three months in New Zealand and the East Cape ranks right up there with the best of the South Island rides.

It’s often better, I’ve realized, to filter out well-meaning advice.  It’s better, after all, to forget about big screen drama and find out for yourself what a place is all about.

5 thoughts on “Into the Heartland”

People of the World

One of the things I enjoy most about bicycle touring is the chance to capture images of all the interesting...