You must visit Southwest Australia.

We’d been hearing that mantra since we touched down in tropical Darwin almost two months back.  And how could we resist?   Locals promised us some of the best scenery in Australia- fields of colorful wildflowers,  winding country roads, rolling hills covered in vineyards and a chance to get up close to some of the world’s tallest trees in beautiful Karri forests.

And it isn’t just Australians who are talking up this pretty corner of their country.   Lonely Planet named the Southwest as one of the world’s Top 10 Regions in 2010. Sure, we were already way behind schedule and needed to get a move on towards Melbourne.  No way did we want to risk overstaying our 3-month visas and miss our flight to New Zealand on 10 December.

But the pull to explore another part of Australia—one with actual towns and trees—was strong.

The Southwest is stunning.  A day’s ride out of Perth and we were pedaling along pristine coastline gawking at the wild surf on one side and a carpet of wildflowers on the other.  A couple more days and we were bumping along a rough track lined by towering Karri trees.   And then suddenly our tour ground to a halt. 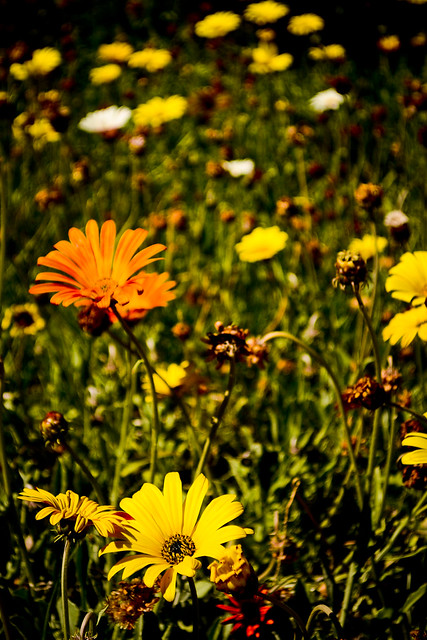 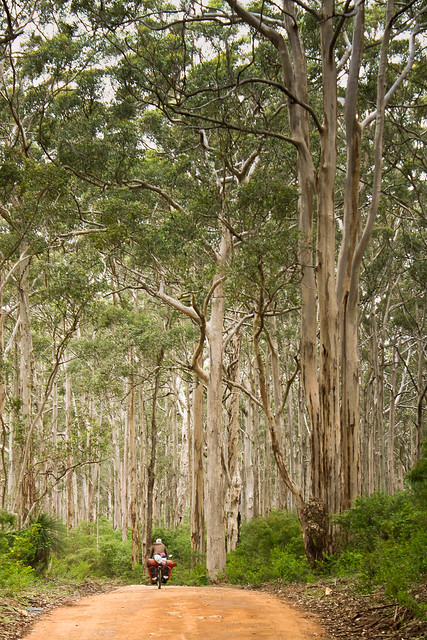 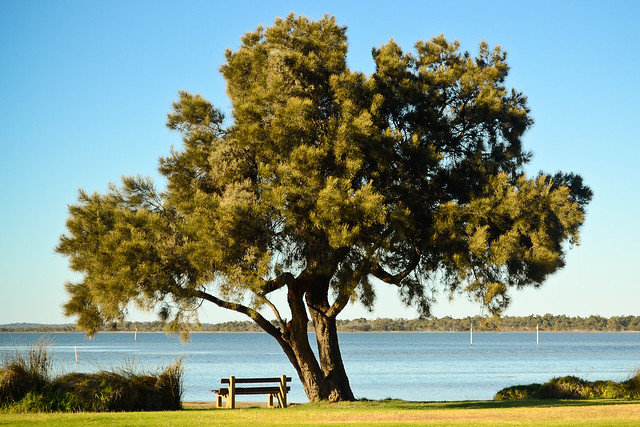 We’d recently ticked past the 120,000 kilometer mark.   Quite naturally, my hard-working Koga was suffering some minor ailments.  The back wheel had been wobbling badly for weeks.  Eric insisted this was normal wear and tear and I’d just have to get used to less than stellar performance.  And I did.  My Koga and I would go through the aging process together.  Trading him in for a fresher, sexier model was out of the question.

But this was serious.  My high-end bike was riding like a second-hand Huffy.  Turns out the hub was out of commission.  It would have to be replaced.  And there we were, tinkering with the ball bearings at a dusty rest area 60 kilometers from the nearest town.

Lucky for us, a couple of French tourists had a breakdown with their rented caravan.  The mechanic sent out to bail those two out ended up giving us a ride into Pemberton.  And from there our next Warm Showers host, Thomas, picked us up and gave us a lift out to his farm.  Lucky, indeed.

Sorting out a replacement hub sucked up almost a week of our time.  Not that I really minded…life on the farm was far from unpleasant.  I could spend hours gazing out at the 50 odd kangaroos that roamed the property.  There were afternoon walks exploring the woods, leisurely meals (not our usual 3-minute dinners sucking down a plate of pasta) and a fluffy comforter to dive under and drift off to sleep.

Hub fixed, we hit the road again.  The heavy rains we’d been experiencing over the last week showed no sign of letting up.

As we shivered and sneezed and tried in vain to keep dry, I almost missed the intense heat of the northern interior.  ALMOST.

Pedaling steadily toward the Nullarbor (“No Trees”) Plain, we were treated to more pristine beaches and long stretches of rugged coastline.  Finally we arrive at Norseman, the final stop before entering  the 1,200 kilometer empty expanse that is the Nullarbor.  There are no settlements.  Just roadhouses  serving overpriced meals and selling a few expensive  essentials.

The Nullarbor is one of Australia’s classic road trips.  Spending 10 days crossing the flat and featureless landscape on a bicycle might well be mind-numbingly boring, but it would be an accomplishment.  The Nullarbor seemed like a must-do for any serious round-the-world cyclist.  We had a decision to make.

With less than a month left on our visas, we still had 3,000+ kilometers to crank out to reach Melbourne.  The breakdown had cost us dearly in time.  3,000 in a few weeks was certainly possible (we’d done as much when crossing the US).  But it would leave little time for rest or relaxation.

Hitching a ride would give us the margin we needed.  We decided to let fate settle the question.  We’d spend an afternoon loitering at the Norseman BP and if a truckie agreed to give us a lift, we’d take it.  If not, we’d hunker down and pedal like crazy.

What can I say?  Australians are just too kind and friendly.  We got our lift—two days in a road train all the way across the Nullarbor.  Doesn’t look like we missed much.  Just a lot of empty land covered in saltbush and bluebrush.  But maybe I’m just justifying our decision to hitch.

In any case, it’s now back on the bikes for the final lap towards Melbourne.  Fishing villages and remote beaches await us on the Eyre Peninsula and then it will be on to the Murray River region before we take on the Great Ocean Road.

Catch up on the latest news via the World Biking Facebook Page.

Leave a comment and let us know what’s on your mind.

6 thoughts on “Stranded in the Southwest”

End of the Outback

Six weeks and nearly 4,000 kilometers and we finally reach our first real Australia city: Perth!  To say that distances...