Rugged coastline, pristine beaches, sleepy fishing villages, rolling farmland, world-class diving and spectacular seafood. The Eyre Peninsula has it all according to the Australia Tourism Board.

Given our shoestring budget, I knew the last two were out.  But those first four, well, they sounded pretty damn enticing after the bleakness of the Nullarbor Plain.

Yes, I had high hopes for this little-visited corner of South Australia.  That is, until we butted bikes with a less-than-tempting trio: headwinds, flies and forest fires! 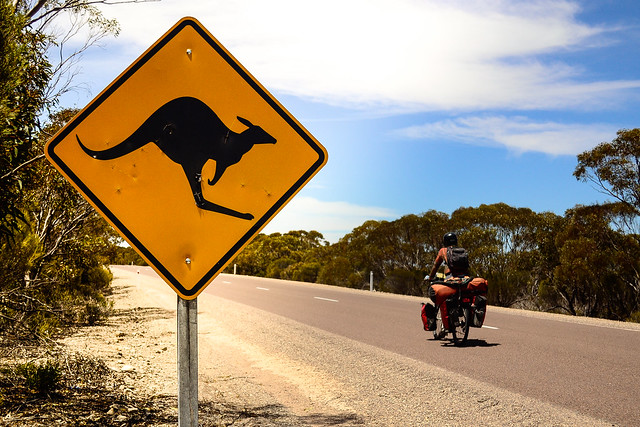 First came the wind.  It batted us about as soon as we set off from Ceduna.  Headwinds are the morale sinking, depression inducing, curse causing scourge of any cyclist’s existence.  In case that’s not clear—HEADWINDS SUCK!

Near day’s end, we rolled the bikes into a metal shed on the beach north of Streaky Bay and crumpled onto the floor in exhaustion.  Fighting winds is tough work.  And all the more difficult because your enemy is invisible.  Not like a big steep menacing mountain.  That kind of opponent you can size up and conquer.  Not so with the wind.

We were fortunate to have a shed to sleep in. The coastal winds might have done with our tent what Sandy did to New York.  I’m afraid it wouldn’t have been a pretty sight.  We weer most grateful for a real roof over our heads, even if it was one that clattered and banged.

Later we stumbled out on the beach for what turned out to be a magnificent sunset.  A gratifying and glorious moment that strengthened us to keep dueling with the elements. 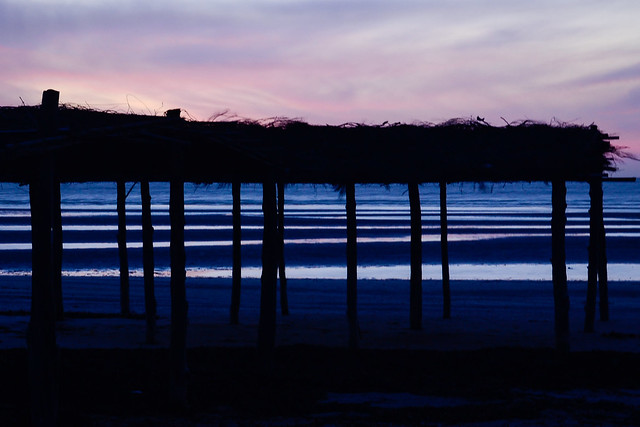 Another beautiful Australian sunset! Just reward after our day dueling with the wind.

Next came the flies.  The headwinds keep the flies at bay, so they’re useful in that sense.  Australian flies excel at breeding and diversifying.  I’ve read that the continent has over 6,000 species of the annoying creatures.  Unless you are of particularly stoic stock or don’t mind spending your days ingesting unwanted critters, a head net is essential gear in Australia.  We’ve got fly-proof net jackets with hoods to keep the flies at bay.

The jackets can get a bit hot and they’re scratchy but the alternative is playing host to hundreds of bothersome flies.

But here’s the real problem.  Bicycle touring is all about being up close to nature.  But with the head net on, it’s like viewing the world through a Burka.  Our vision is seriously impaired.  It’s like having your head pressed up against a screen door all day long.  Headwinds or head nets—I’m not sure which one is worse. 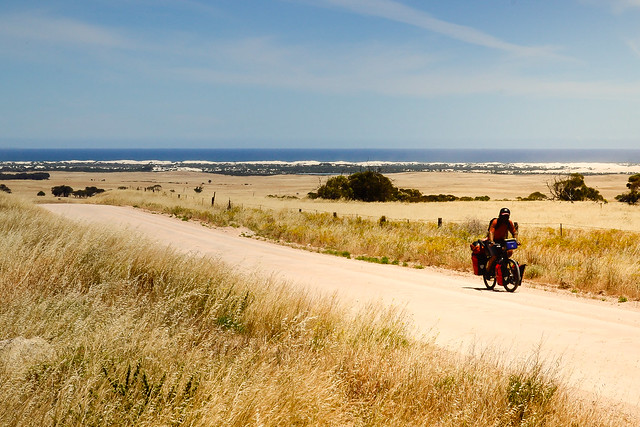 Where the outback meets the sea! 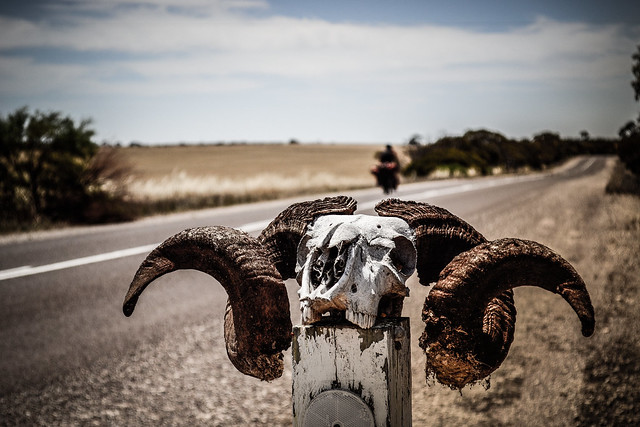 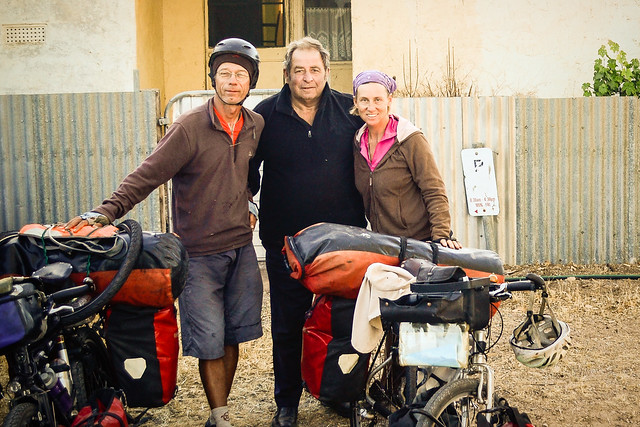 A friendly sheep farmer on the Eyre Peninsula who spontaneously invited us in for the night.

Then came the forest fires.  In hope of escaping the wind, we decided to cut inland.  The interior of the peninsula was dry and dusty, mostly used for sheep and cattle ranching.  As we cycled into the tiny town of Locke (okay maybe not cycled in…the town’s friendly mayor actually gave us a lift the last 6 kilometers or so…headwinds again), we discovered the small farming community had been put on Catastrophic Fire Watch.

Temperatures had soared up to 100+ Fahrenheit (42 Celsius) and the land was tinderbox dry.   Winds the following day were forecast at 45-65 KMPH with gusts up to 85 KMPH.  (Sadly not blowing in our favor.)   Schools had been closed and farmers were prohibited from harvesting for fear their heavy machinery might spark a flame.  We pegged down the tent extra tight and hoped for the best.

The mighty wind raged throughout the night, but our Big Agnes fought back with gusto, just as she had in Patagonia.  A few fires were set off in the region.  Mostly further south near Port Lincoln, where we might have been trapped had we followed our original route.  We were safe and sound in Locke. 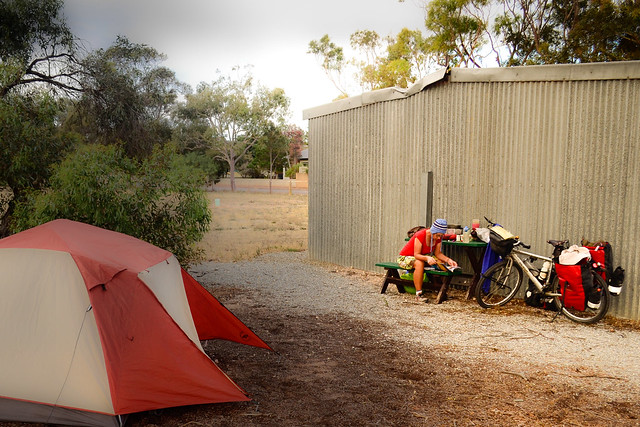 Hunkering down in the community campsite in Locke. The shed provided a little relief from the wind. 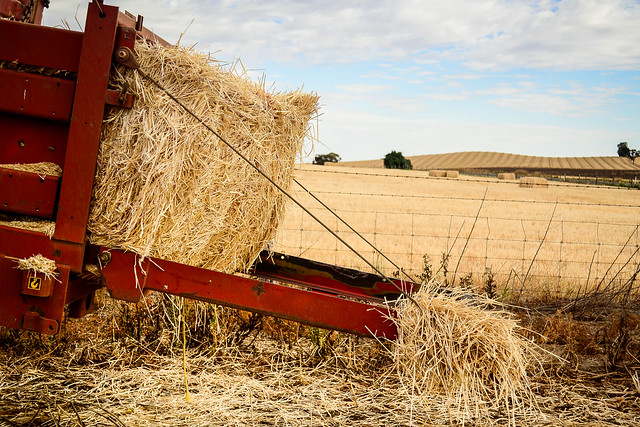 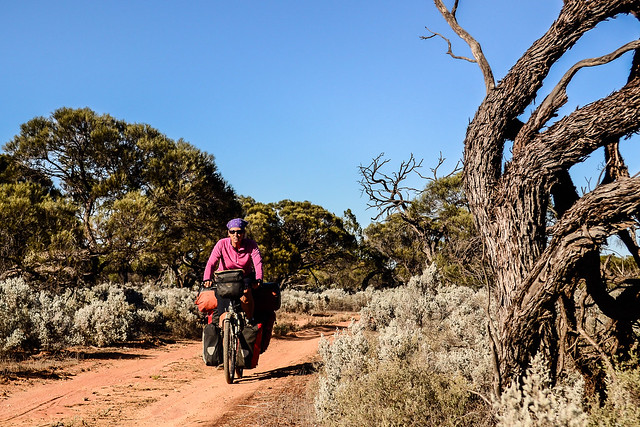 So much blue bush scrub in this part of the world!

The last few days have been almost perfect.  Just the way I remember bike touring in our early days back in Europe.  We followed the Reisling Bike Trail through the wine growing region of the Clare valley and then hopped on to the Rattler Trail, a rough track running through some of South Australia’s most stunning countryside.  Finally we cruised into Adelaide on a warm, sunny and relatively wind-free Saturday afternoon.

Next up is the lonely Limestone coast and then on to the grand finale:  the Great Ocean Road and a triumphant ride into Melbourne.   At least I hope that’s how it turns out! 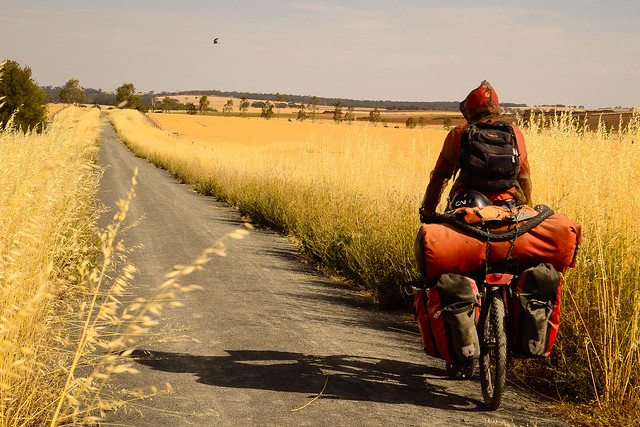 Cycling a rough section of the Rattler Trail in South Australia–fly protection essential! 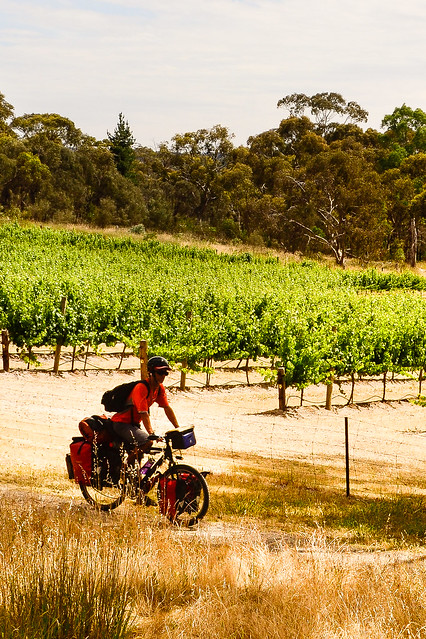 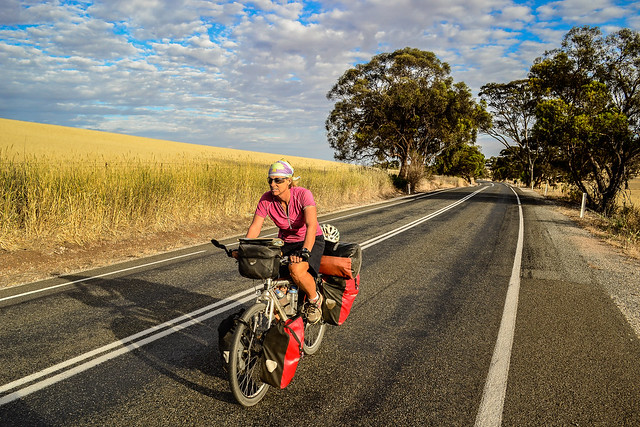 Big blue skies and no flies heading towards Adelaide!

Catch up on the latest news via the World Biking Facebook Page or connect with us on Twitter.

You must visit Southwest Australia. We’d been hearing that mantra since we touched down in tropical Darwin almost two months...