Despite dire warnings (You’ll sink!  You’ll be crushed by the crowds!  You’ll catch a nasty disease!), we’d survived half a dozen Indonesian ferries.

The trip to Timor was to be our last.   The journey was slated for a mere 18 hours.   Wanting to stake out a good spot on deck, we arrived at the harbor 3 hours in advance.

Pedaling up the port at Laruntuka, it became clear that a mere 3 hours lead time relegated us to the status of late-comers.  The place was buzzing with activity.

We fought our away aboard into the sea of humanity. Passengers were squeezed up next to each other wrestling for space.   More and more determined travelers pushed their way onto the ship.  Families were camped out atop mountains of luggage and young men crammed into truck beds.  Babies howled, music blared and the male population puffed away on their clove cigarettes.

And how did we cope?  Quite nicely.

As soon as the crew invited us up to their quarters!  (I know, I know… it’s not fair, but Indonesians offer the most extraordinary hospitality to foreign visitors and who are we to turn it down?)

Ah, the simple luxury of space to stretch your legs.   The lavishness of a steady supply of oxygen.  The sheer extravagance of silence.  Amazing how little it takes to bask in contentedness when the alternative is truly appalling conditions.

West Timor was to be our final stretch though Indonesia.  Our minds were already focused on Australia.  What a joy it would be to raid a well-stocked supermarket, blend into the crowd, wander into tidy public restrooms and reach for a roll of toilet paper.  We were worn out from Third World travel.  Could hardly cope with all the attention we garnered and wanted nothing more than to luxuriate in anonymity. 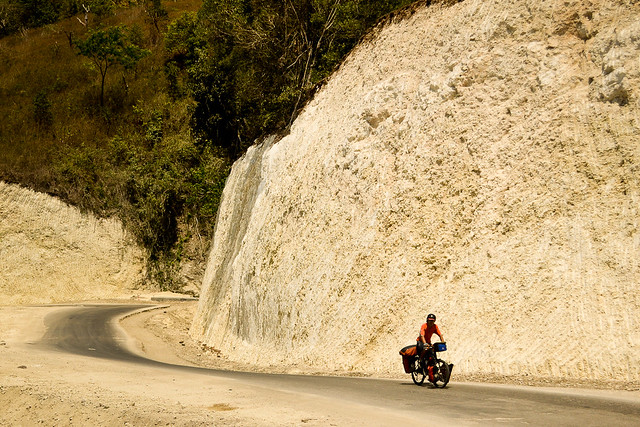 At least not in the West of Timor.  East Timor sees a surge of two-wheeled travelers during the Tour de Timor.  Our own tour just happened to coincide with this yearly event.   More than 300 cyclists were expected to take part in this year’s bike race.   A lot of Australians but more and more Timorese saddling up for the race.

Bike fervor filled the air!  Our flight to Darwin on 11 September meant we just missed being able to join in all the fun.

As I write now –from the air-conditioned luxury of the home of our latest Australian couchsurfing host– Timor seems a world away.   It took but a scant few days to re- accustom ourselves to the ease of the Western world.  To flush toilets and real showers, smooth roads and orderly traffic.

Our photos of the Timorese people remind me of their determination and fortitude, their beauty and kindness.  The images of the landscape bring back the stark splendor of the sea pushed up against the barren interior.

A few superhuman cyclists with legs of steel manage to traverse the island too, using local buses to get up...