Visa extensions in hand, we slipped out of Surabaya.  Kalimantan–with its heat, humidity and hills– had left us exhausted. Downtime imposed by the dawdling  Indonesian immigration officials had done us good.  We’d satiated our appetite for internet and were eager to start cranking the pedals again.

Java’s got a bad rap as a bicycle touring destination.  Most two-wheeled travellers cite the busy roads and constant stream of settlements as reasons to give Indonesia’s most populous island a wide berth.

Eric promised he’d charted a quiet route through the Javanese highlands.  I was suspicious. 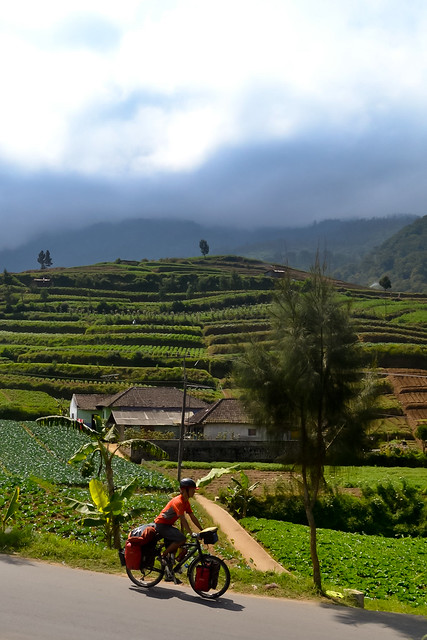 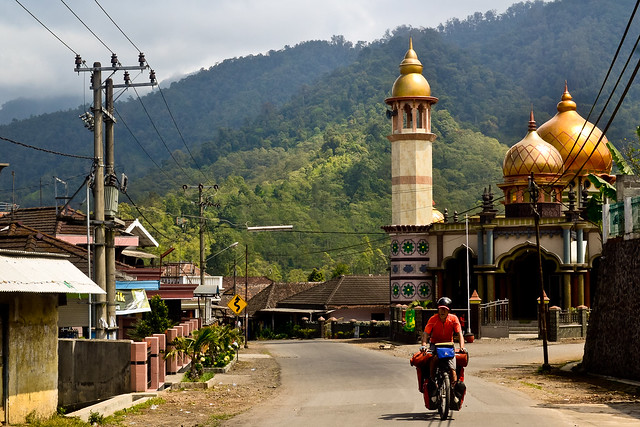 The second day out of Surabaya we’d climbed to around 1,500 meters.  The road was incredibly steep (some spots up to nearly 20% grade) and winding.  Difficult to be sure, but much easier than Kalimantan since we didn’t have to deal with the heat and humidity.  The terrain was covered in terraced fields.  Not rice paddies, as you might imagine, but vegetables such as broccoli and cauliflower.  At the summit, fields of luscious strawberries spread out over the steep hills.

Our biggest challenge was Ramadhan.  Most restaurants were closed until after sunset.  We took to asking around about open eateries and were often directed down a side street into a building with the shades drawn tight.  Inside were Christians and weak-willed Muslims indulging in gastronomic delights.

No visit to East Java would be complete without a climb up to Mount Bromo, Indonesia’s best known active volcano.  Bromo (2,329 meters) last blew its top in 2004, killing two people.  These days jeeps ferry well-heeled tourists up to the crater rim.  We decided to bike up.

The most popular route is via Cemoro Lawang.  After consultation with Robin (the same guy whose blog we’d turned to in planning our Kalimantan route–we actually met him in Surabaya which he now calls home) we decided to give the alternative route from the southwest via Ngadas a try.

Yeah, that’s what I thought, too.  We left our gear in care of the priest at the Catholic church in Tumpang and biked up unloaded.  Wisest decision we’d made since deciding to bail 1,500 kilometers short of the complete Borneo circumnavigation.  (Mind you we stuck Borneo out for 3,500 kilometers.  We’d suffered enough.)

The ride up to Bromo was one of the best days of biking in Indonesia.

We’d barely recovered from Bromo when it was time to take on Kawah Ijen. This is actually a plateau, which at one time was a huge 134 sq km active crater.  2148 m above sea level lies a spectacular turquoise sulfur lake surrounded by the sheer crater walls of the volcano.

What’s really special about the lake is the sulfur collectors who work there.  These men trek up and down the mountain shouldering baskets of pure sulfur from a quarry on the lake’s edge.

It’s a labor-intensive operation and not very profitable for the miners themselves.  I imagine the middlemen make out pretty well.

The ride was fantastic–tough cycling but fun climbing through beautiful scenery.  Much of the area is covered with coffee plantations and cool shade trees.

Eric had been right about the route.  It was quiet for the most part.   You won’t hear me bad-mouthing Java–I loved our time touring there.

The following day we caught a ferry to Bali.   More on that phase of our Indonesia bike tour plus news from cycling Lombok, Sumbawa and Flores in the next update.

7 thoughts on “Coffee and Craters”

The Streets of Surabaya

One of the best parts of an extended bike tour is the luxury of time.  Time to take it slow,...