The monks invited us in without a moment’s hesitation.  Their temple was a simple one, but we were welcome to spend the night.

I imagined we’d be shown a suitable spot out back, but no, a gentle-faced man in a flowing safron robe motioned for us to enter the place of worship and offered us a prime camp spot for the night:  directly across from the sparkling Buddha. 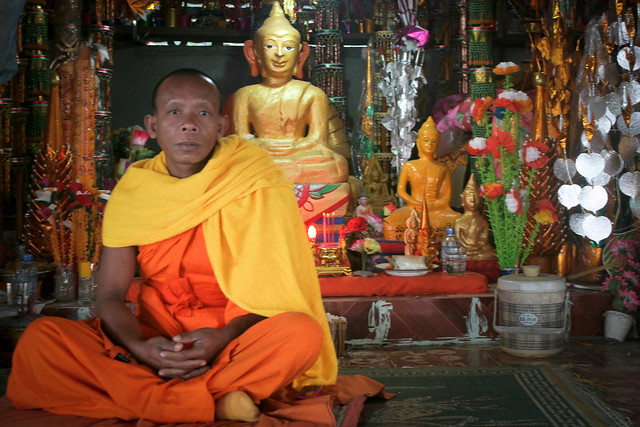 I knew enough to deposit my smelly sneakers outside before climbing up to enter the temple, but beyond that I was a bit shaky on protocol.   While I was pretty sure firing up the MSR under the Buddha’s benevolent watch  wouldn’t go over too well, I wasn’t sure if it was uncouth for a woman to strike up a conversation with the holy men.

And what about a trip to the toilet?  Where was the hot shower?

Things sorted themselves out soon enough.

Cooking:  OK on the temple steps.

Conversation:  Not an issue, nobody speaks a word of English anyway.

Toilet:  Under construction, if nature calls find a secluded spot in the forest out back.

Hot Shower:  Are you serious?   There’s not even running water.  Discretely douse yourself with the water found in the cisterns, don’t let any flesh show and pretend the monks are invisible when the go about their daily ablutions.

A low, melodic rumbling fills the air as the monks begin their evening chant.   We’re busy scrubbing vegetables, slicing and dicing for a lovely concoction of coconut curry.  Experience has taught us that self-catering is the way to go in much of rural Laos.

Dinner is done, the dishes given a salutary rinse at the cistern and I crawl into the tent to rest and revel in the silence.  The peace lasts for all of two minutes.

Chinese soap operas begin blasting out of nowhere.  I poke my head out of the tent and glance around.  The monks are gathered up on the dais next to Buddha, their eyes glued to a TV that has sprouted incongruously in the corner.

Watching tele-dramas strikes me as very un-monk-like, sacrilegious even, but mostly just annoying.  Shouldn’t these guys be hitting the sack early so they can wake at daybreak to beg for alms?  I thought that was the Southeast Asian tradition. 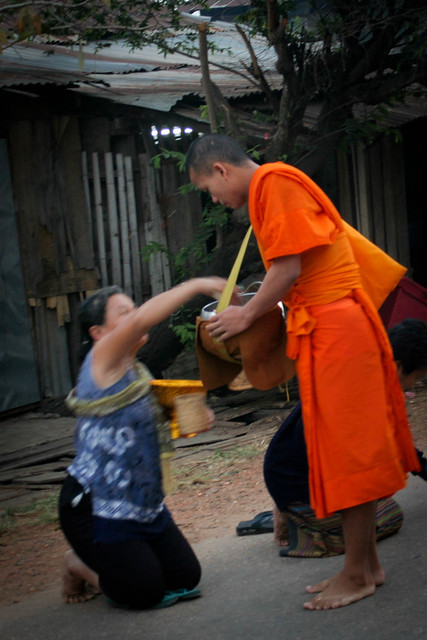 Well, I certainly can’t fault these guys for sleeping in.

The wake-up gong went off not at 5AM, not at 4AM but at three-oh-five in the morning.  Meaning between the sex and intrigue of the soaps, and the chanting and prayers of the oh-so-early morning ritual, there were just 4 hours and 5 minutes available for sleep.

And a lot less for me, since around midnight I was overcome by cramps and nausea warranting a trip out back into the forest.  Which was scary, by the way, in the dead of night.

Happy in spite of it all

In the morning, my sleep-deprivation induced grumpiness was tempered by the cheerfulness of the monks.  They were so happy, it seemed, laughing and chattering as they smoked cigarettes (another shocker) and swept out the temple with their homemade brooms.  They weren’t bothered by the lack of running water or basic sanitation.

After several rejuvenating cups of Nescafe, we were sent off with big smiles and waves and a lot of gesturing which I took to mean we were welcome back anytime.  Just one more example of the unexpected kindness of strangers.

That was just our second Camping-at-a-Buddhist-Temple experience.  The first was in Taiwan, where we were kept awake all night as a crew of devotees prepared for a festival the following day.

I’ll give temples one more try, but so far they rank dead last on my list of preferred places to sleep when stranded in the middle of no-where.  The people are wonderful, but the places are just too noisy. 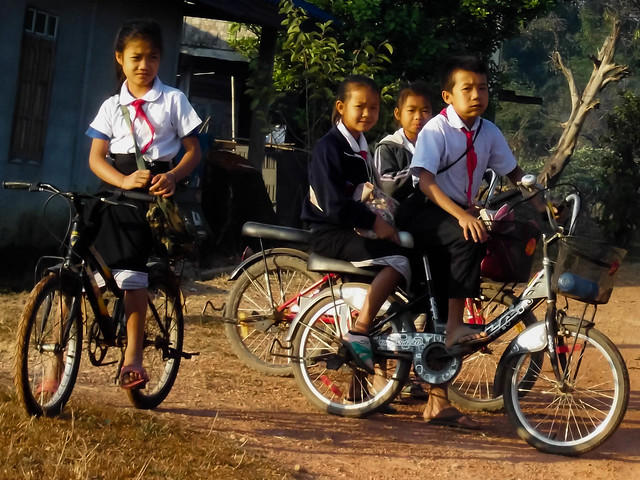 A failure and two types of flat

Southern Laos is surprisingly flat.  Delightfully lacking in climbs that cause your calves to burn and your thighs to throb.

Flat, and thankfully so, because Eric was stuck single-speeding it all the way to Savannahket.  Mechanical failure is an unavoidable feature of long-distance bike touring, and this time it was the derailleur hanger that threatened to side-track our cycling.

Snapped in two, and completely useless.  Twitter crowd-sourcing brought forth suggestions to try welding it back to together (too delicate), check out Top Cycle in Vientainne(helpful folks, but they can’t solve our problem) and shortening the chain and single-speeding it.

That’s what we (well, OK, you got me again…Eric) did.  And it worked, for the most part.  He did have to push on a few steeper sections, but all in all the Koga (and  my dear, long-suffering husband) performed admirably well. 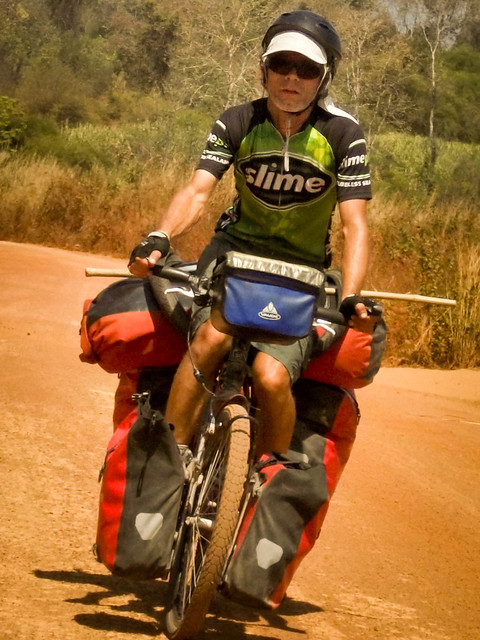 A bigger problem than the lack of gear range was our fast mounting tally of flats.  Three, four and five stops a day to repair punctures.  While we’re still not sure where the problem lies (the tires haven’t racked up that many kilometers) we do know that flat fixing under the piercing afternoon sun on a dusty road is about as fun as shoveling snow in a Montana blizzard.

Our heroes at Koga have already shipped a replacement part to Thailand, and we should be able to pick it up in a couple of days.  Reliable support means a lot in these kinds of sticky situations.  Thanks Koga!

In spite of the bike-related bothers, the riding was lovely.  The south is a place of flooded rice paddies, tidy plots of vegetables, and landscapes bursting with color.  We balzed  into Savannakhet just as a swirl of fiery oranges and reds was lighting up the sky over the Mekong.  Even with the breakdowns, minor irritations and frustrations, not much beats bicycle touring. 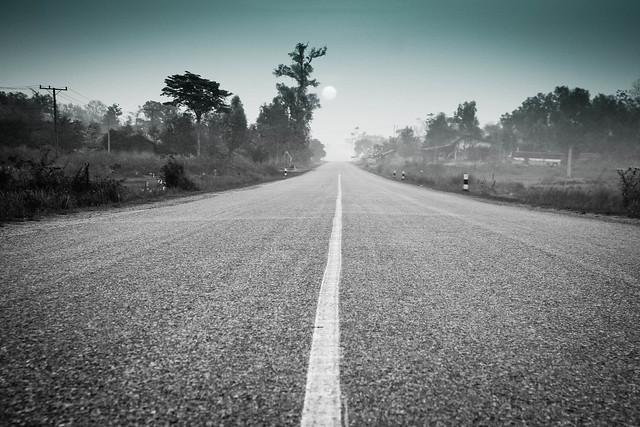 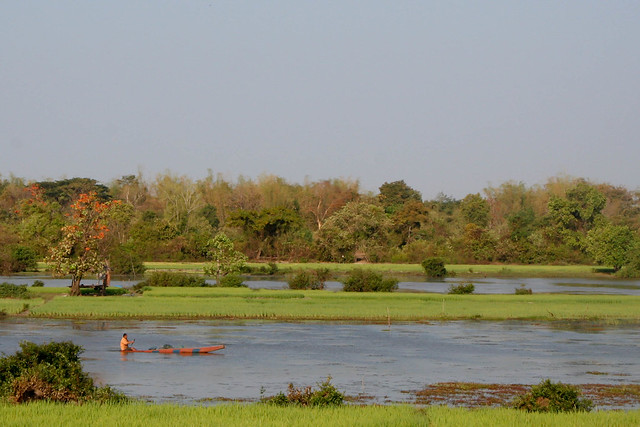 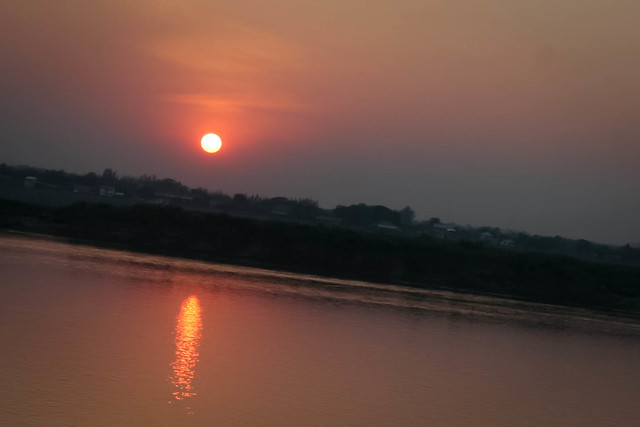 Slumbering with Buddha and a Big Breakdown

6 thoughts on “Slumbering with Buddha and a Big Breakdown”

Who says you have to go high-tech?

Certainly not Jay Pathak.  The 60 year old Indian-national set off on a bicycle tour of his home country and...