I had plenty of ideas about China before actually visiting.

These days, it’s hard not to pick up a newspaper or tune into a podcast without being treated to some pundit’s views on China’s rising power, influence and prosperity.

Like most of you, I’d read of coastal boomtowns full of factories fuelled by small armies of hardworking migrants, seen images of ancient Hutong neighborhoods turned into gleaming high-rise housing projects and heard talk of burgers and fries overtaking Peking Duck and Mongolian Beef as the nation’s favorite foods.

We’d seen all that as we slogged through the congested Pearl River Delta Region.   On occasion, we’d even popped into a brightly-lit McDonalds  for a tasty 3 yuan ice-cream cone.  In fact, we’d gone so far as to search out a Walmart superstore so we could stock up on Western treats like ground coffee (Chinese stick to Nescafe if they drink it at all), whole wheat bread (the locals like theirs sweet and spongy) and strawberry jam (have yet to find the stuff in regular shops).

For the homesick cyclist, there’s obviously a positive side to all this intense progress and development.

Give me the weird, the bizarre and the unexpected

But no one travels halfway around the world to wander around a place just like home except that ordering lunch involves 10 minutes of pantomime and pointing and relieving yourself requires fine squatting technique, good aim and the ability to hold your breath for extended periods.

No, most of us are in search of the exotic.  And in China, that’s not too difficult to happen upon if you’re a two-wheeled traveler.

Ride a few miles down any of China’s rural roads and you’ll find an unchanged China.  Dusty, downtrodden places where a shiny fast food restaurant would look as out of place as a scruffy noodle shop on the Champs Elysees.

This unchanged China is a fascinating place.  Around each bend lies the possibility of novelty and surprise.

Early one morning as we race through the backroads of Guangdong province I stumble upon an elderly man tramping proudly down the road.  He’s dressed in an oversized army uniform that looks like it’s leftover from the cultural revolution.  A soviet-style fur hat and white cotton gloves protect against the wintery chill.  “Ni-hao, Ni-hao,” I shout.  “Hello, one photo please.”  He smiles and consents, seemingly unfazed by the attention, perhaps flattered when I give him the thumbs up as I show home the results on the camera’s small screen.

Then he nods and turns, continuing his trek to who knows where.

Another day we find ourselves stranded in a small town as night falls.  The locals are surprisingly disobliging as we search for a safe place to sleep.

“Mei-yo, Mei-yo,…don’t have” they snicker one after another as we enquire about accommodation.

Finally we head out of town, resigning ourselves to riding the 30 kilometers to the next town by moonlight.  Wild camping in this part of China is next to impossible.  Every single inch of the country seems to be taken up by either a settlement, terraced farmland or a rubbish heap…nary a place to conceal a tent for the night.

The Communist Party to the Rescue

Thank goodness for the friendly communists.  Yes, the cadre at the local headquarters invited us in for the night.  We pitched the tent in the recreation-room next to the ping-pong table and spent the evening inventing excuses as to why we couldn’t partake in the free-flowing alcohol.

A young woman calling herself Jesse was our interpreter for the evening.  Everyone was most welcoming, even the police from the compound down the road who stopped by to check our documents.

It was a fine evening, complete with a vegetarian dinner (eggs with tomatoes and stir-fried greens) plus an incredibly hot shower.

We pedaled off early the next morning, my opinion of both the communist party and the police greatly enhanced after the unexpected hospitality. 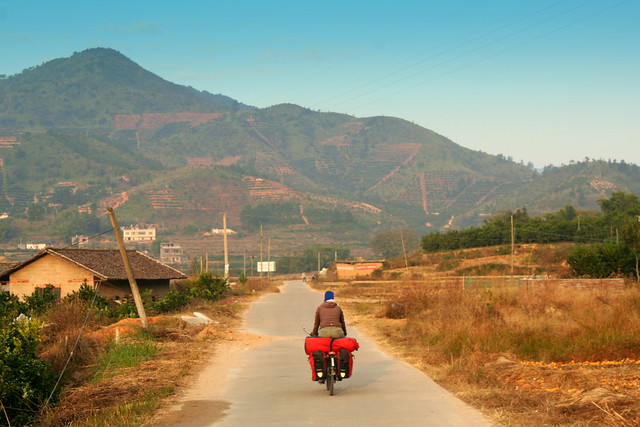 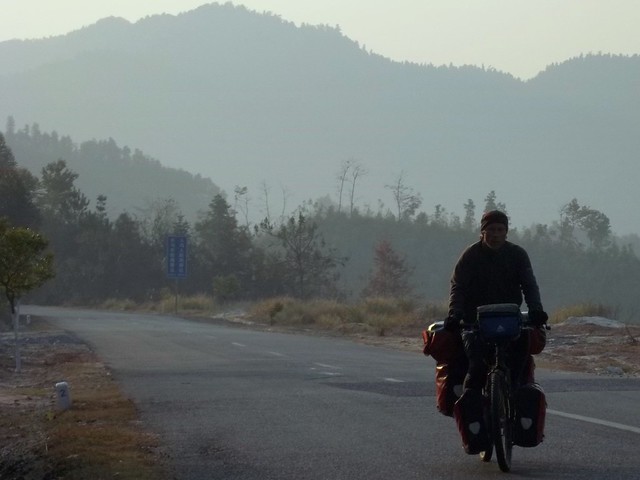 As the days passed we were to have two more positive encounters with the authorities.  Once again when we were stuck in a small town and the owner of the local lodging refused us admittance.

After being turned away at the local school, we sought help at the police station.  A brand-new building with marble floors and imposing  furniture and flat-screen computers staffed by two fresh-faced recruits who spoke hardly a word of English.  After being served two cups of tea, one officer telephoned a translator to whom we explained the situation.  Then we passed back the phone for another round of questions and clarifications.

No, it was not possible to camp at the police station; however, the police would gladly drive us to a town where suitable accommodation could be found.  They would guard our bikes and belongings overnight at the station, we would spend the night at the fancy hotel and the recruits would return to the town with suitable accommodation for foreigners the following day to pick us up and reunite us with our bikes.

Beware of the Bed Bugs

A complex solution to a simple problem.  After much negotiating and insisting that the “rough village house” would be good enough for us, we were allowed to spend the night at the guesthouse where we’d originally enquired and been turned away.

The officers accompanied us to the cheap hotel (20 Yuan, about $3.20), and even phoned the translator once more so she could assure us that the place was safe and no harm would befall us.

The dirty sheets and peeling paint were hardly inviting, but we did survive, albeit with a few nasty bug bites for our trouble.  20 Yuan was actually a bit steep for that dive.  Since then we’ve negotiated fine rooms with WiFi, hot showers and clean sheets for just 10 Yuan more.

Yet another act of kindness

In act III, the local communist party chief arranged for us to spend the night in the home of a local businessman.  I was feeling unwell and Eric was exhibiting the very best of husbandly goodness by searching for a place for me to rest.

The village at hand, a collection of shabby dwellings surrounded by farmland, looked unpromising…until Adrian showed.  Yes, the Chinese all adopt English names since we foreigners exhibit such low aptitude for learning Chinese.  Just as we’d agreed to take shelter in a grungy, dust-covered room with a filthy, torn mattress and a window missing half its panes, Adrian put a halt to our suffering.

A local man had done well for himself in the city and was now building himself a sumptuous, slightly ostentatious home right in that very village.  And we, as honored foreign guests, were to spend the night in comfort in the half-constructed building.  Thanks to Adrian and the local communist party.

So far, we’ve been well looked after as we cycle through this unchanged China.  Hospitality is taken seriously in these forgotten backwaters. 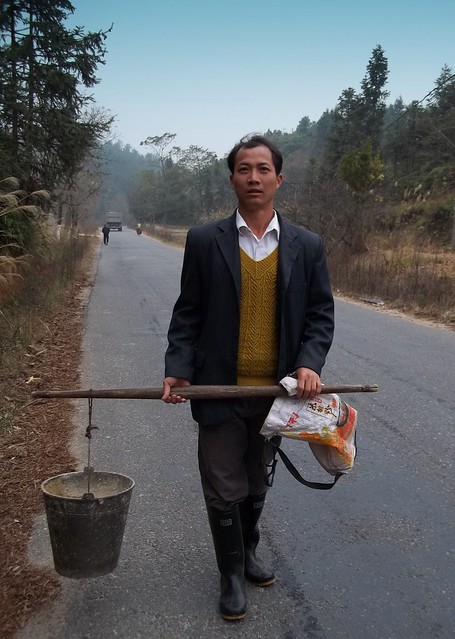 Life in rural China is tough.  It’s unsurprising that the young have set off in droves to tempt their fate in the factories.  Grandparents have been left behind to mind toddlers and work the fields.    Theirs is not a comfortable retirement of golf and travel, rather one of survival.  Tilling the soil without help of machinery and harvesting by hand, setting off to market before dawn burdened with baskets of weighty vegetables.

The old men gather in the market to play cards and dominoes, but rarely do I see women at rest. 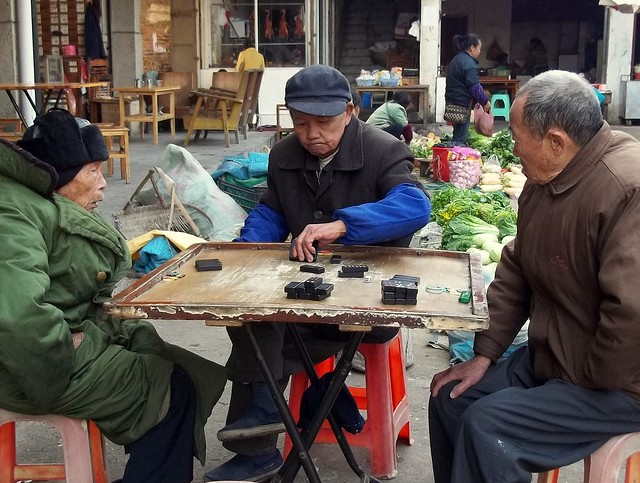 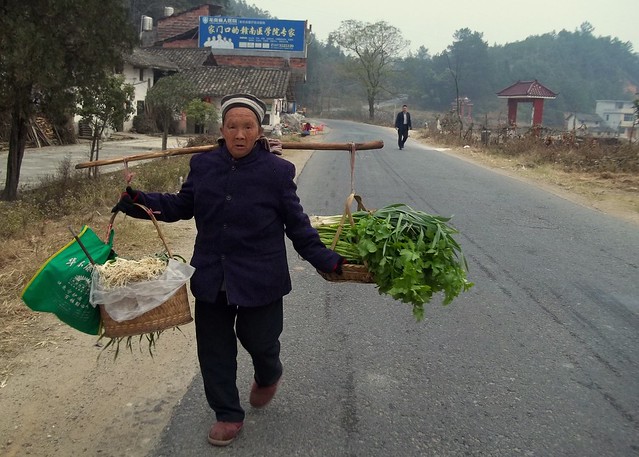 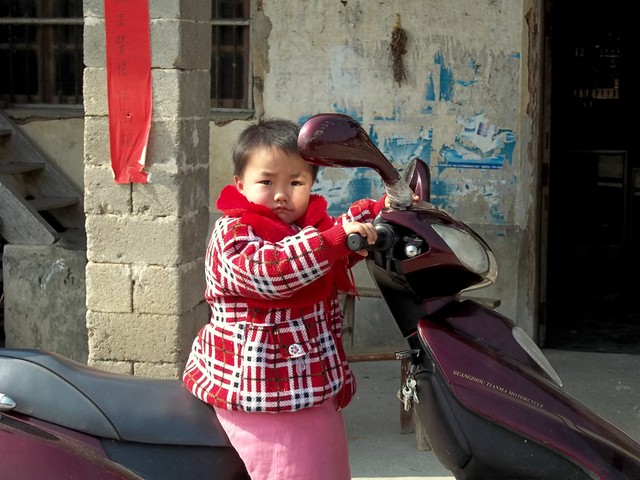 The villagers appear solemn and serious, but maybe that’s just the sway of the cold winter weather.

My greetings are mostly met with smiles these days.  Perhaps the locals are cheered to see somebody who’s got it worse than them.  For here we are, two foreigners with all our worldly possessions strapped on bicycles furiously pedaling our way across Asia.

Misery to some, freedom and adventure to others.

Falling in (and out!) of love with China

Just like in relationships, it’s also possible start off on the wrong foot when getting acquainted with a country.  Perhaps...