Harder conditions make for a happier cyclist.  Or at least that seems to be the case for intrepid Englishman Peter Gostelow.  This week Peter shares his experiences biking through a country I’m not sure I’d have the courage to venture into:  Central African Republic.

A long time ago Central African Republic (CAR) was used by overland trucks and people, like myself, who wanted to travel across central Africa without flying.

The Ubangi river, which runs along the south of the country, separates CAR from the DRC. Once you cross that river you’re into DRC, and 500km away from Africa’s greatest river journey – up the Congo River.

There are no large cities like Brazzaville and Kinshasa to worry about. It’s an obvious, if intrepid route choice to cross Central Africa, but all the check-posts you dealt with in CAR will have won you your half-stripes for dealing with the worst of African officialdom.

You earn your full stripes in the DRC, and can feel smug that very few other people have come this way before on a bicycle. 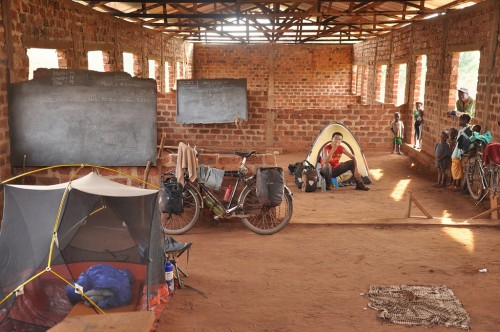 Bangui, however, has something of a time-warped charm, where the pace of life drifts by like the languid surface of the Ubangui River, the Congo River’s largest tributary that flows beside this one time French-controlled outpost. It’s too small, poor and off-the-beaten track to be polluted or swamped with traffic and street-peddlers.

Of course there’s not much to do here, but if you’re about to cross the river into DRC it offers a last refuge before the jungle commences again. 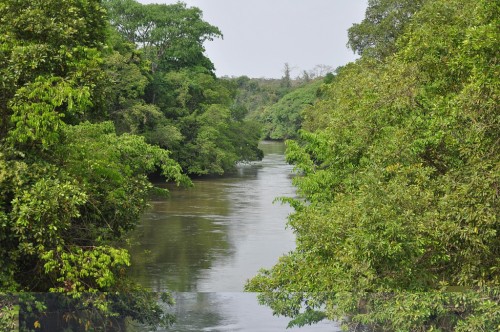 The interaction with local people in CAR is like you might expect from a country where most people, particularly children, have never seen a foreigner before.

Out in the villages there is no electricity or newspapers. The sight of a white person riding a loaded and unfamiliar looking bicycle naturally draws tremendous curiosity.

Stop to say hello and within minutes you will be surrounded by a sea of faces as the inhabitants of an entire village comes to stare at and ask the stranger questions. At times this can be exhausting and intimidating, and for some cyclists who like their solitude it might seem like a complete nightmare.

For those who don’t mind the attention and like to imagine what it must have been like for Stanley and Livingstone (although they were never in this part of Africa), these encounters with the photo-opportunities that often arise, are ones fast disappearing in a world that is so well traveled nowadays.

CAR is one of the few places in Africa where you can still see pygmies living in the forest. These small-statured people are the original inhabitants of central Africa’s forests, living here long before Bantu tribes arrived.

The Michelin map to Central and East Africa even writes pygmies across the south-western part of the country.

Descending into a village one evening it came as a shock to see several pygmy families emerging out of the forest to walk home. They were as shocked at my appearance as I was at theirs. 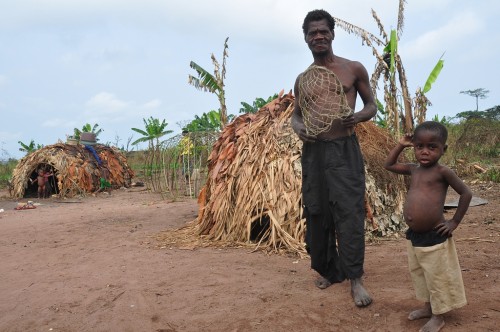 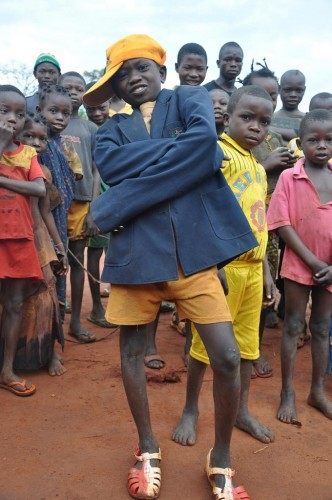 #2  Welcome to the Jungle

What remains of dense jungle in West Africa is tame in comparison to what you will experience in the southern part of CAR. This is the tropical and primeval Africa of boyhood imagination, at least mine. It begins in Cameroon and continues through southern CAR into the Congos.

Cycling through that humid tunnel of twisted and tangled overgrowth, I used to peer into the enveloping darkness and wonder what other life forms existed in there.

Sometimes they came out onto the track, like the enormous centipedes and fierce-looking columns of black ants. Much less threatening were the butterflies – thousands of them surrounded the bike for a few days like confetti in the wind.

And then there were the rivers silently flowing through the forest.  They didn’t compare in scale and frequency to what came later in the DRC, but there were many of them – mere tributaries of tributaries to the mighty Congo River, and a tantalising taste of the adventure that was to come. 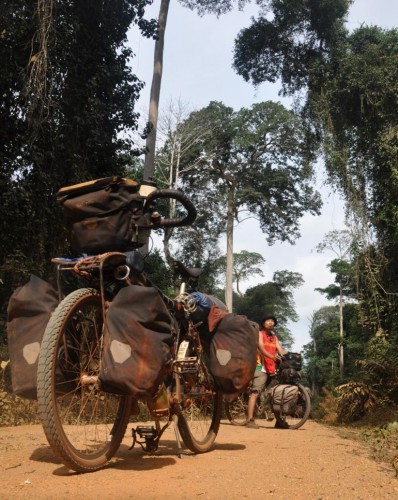 Not many people have heard of CAR, let alone cycled through it.

Political instability, terrible infrastructure and countless road-blocks manned by gun-wielding police are just some of the reasons that make CAR a challenge to cycle through.

This is Africa at its rawest. People are desperately poor and survive on a diet of cassava.

If The Gambia is Africa for beginners, then CAR is definitely on the list of Africa for the experienced. But there are some cycle tourers, such as yours truly, who like the challenging places. Cycling through CAR makes even a warm beer in the evening seem refreshing.

When travel becomes easy, predictable and repetitive it can be boring – CAR is none of these.

You might find yourself sampling bush-meat beside a chief’s hut in a small village one evening, and the next giving an impromptu English lesson to a group of shocked children in whose mud-brick school you pitched your tent.

At the end of it all, you know that you will never, ever forget the experience you had travelling through this country.

And once you’ve cycled through it, scathed or unscathed, you’ll have the confidence to cycle pretty much anywhere on the continent. 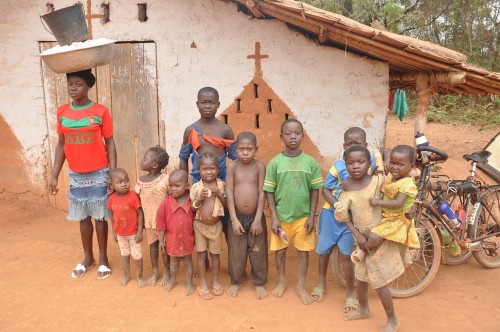 In 2003, Peter Gostelow moved to Japan to teach English and two years later began  The Long Ride Home, a 50,000km bicycle journey back home to the UK.

Since returning in 2008, he has used his Photography and experience from the road to speak to a range of audiences. He has also contributed to the Adventure Cycle Touring Handbook and the CTC magazine.

Mayhem on the Mainland

Getting  from Hong Kong- a tiny territory crammed full of 7 million people- to Shenzhen- a sprawling mega-city populated by...