During my trip from Alaska to Argentina one of the most common questions has been: “Which country have you enjoyed the most?”. Usually my answer is that they are all great in their own way, but when I was asked a few weeks ago and after giving it a little more thought, I added “… but, if I could only return to one, I think it would be Ecuador”.

Ecuador has it all: mountains, volcanoes, jungle, ocean, culture, good food, incredible scenery and adventure at every turn. Picking my top 5 was no simple task.

People who enter Ecuador from the North are sure to be impressed by the large and modern, but still largely indigenous market town of Otavalo. Both men and woman here dress in their traditional attire, which includes strings of gold beads around the necks of the women, and short, white pants and ponytails on the men.
Spanish is still a second language for many residents and it’s not uncommon to overhear a conversation in their native tongue, Quichua. For a light-travelling cyclist, the only thing harder than leaving Otavalo would be to leave without one of the beautiful, locally made alpaca wool products.

For me, it was impossible not to be amazed by the hillside, patchwork farms throughout the country.
The colors and shapes they create add to what is already an amazing landscape. A bicycle traveler will also encounter snow-capped volcanoes, beautiful sweeping views over wide, green valleys, dense jungle and at times even desert!
The unusual Frailejones, found in El Angel Ecological Reserve, will definitely remind you that you’re in a very unique place.

Much of the fruit in Ecuador is unique to South America and nearly impossible to find elsewhere.
From the common pineapples, bananas, and passion fruit, to the less well known granadillas and naranjillas, to the virtually unheard of pitahayas and uvillas, you’re sure to be in for a treat if you enjoy trying exotic fruits. 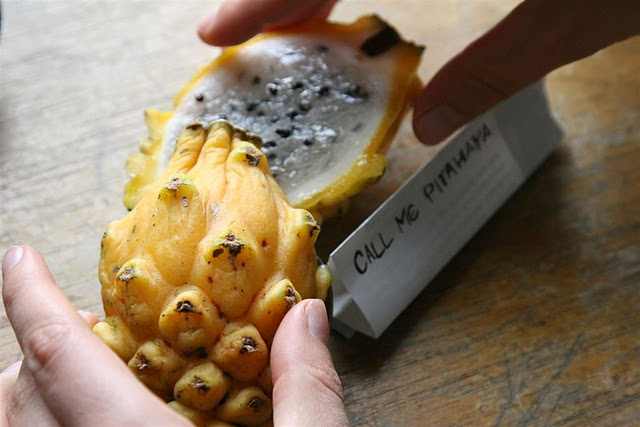 With the variety of the landscapes and roads to be found in Ecuador, having a boring day will be nearly impossible.
From the steep cobblestone climbs around the crater lake Quilotoa, to the rutted, unpaved downhill through the jungle after Sangay National Park, to the unimaginably steep climbs in southern Ecuador, you’ll wake up every morning wondering what new adventure the day will bring.

While you can’t do a whole lot by bike on the Galapagos Islands, no “Ecuador Top 5” list would be complete without mentioning it.
A truly unique place, the Galapagos Islands have made a big impression on Charles Darwin as well as everyone who has visited since. The curious Blue Footed boobies, giant tortoises, friendly sea lions and salt-spewing iguanas will be sure to leave an impact on you as well.
About the Author
Paul Gareau got his first taste of touring in 2002 with a short trip around the northeastern United States.
Since then he has completed nine other tours, and wrote this article towards the end of his two and a half year trip from Fairbanks, Alaska to Ushuaia, Argentina.
What’s next? Norway to South Africa, Europe to Japan, New Zealand and Australia? Hopefully all of them!
PanAmericanTour.net
Top 5 Reasons to Go Bicycle Touring in Ecuador