It’s  It’s the most evocative name for a highway (or network of highways) in the world.  It leads you from ancient capitals like Beijing, Luoyang or Xian far to the west, in the footsteps of legendary travelers like Xuanzang, Marco Polo or Ibn Battuta.  Test your mental and physical fortitude against the rugged terrain of Shaanxi and the Gansu Corridor, camp in the shadow of the Great Wall, ride through the fiery oven of the Gobi, discover ancient Buddhist cave temples, and ride over the mighty Tien Shan into the Central Asian republics and on towards the Mediterranean.  Or else end at Kashgar and its legendary Sunday Market.  There is no more perfect long-distance bicycle expedition in the Eastern Hemisphere.

Na  Napoleon said that an army marches on its stomach.  Well, a cyclist rides on his or her stomach, and China is one of the best countries in the world in which to fill your belly.  The variety, tastiness and cheapness of Chinese food is truly amazing, and kept me happy on many a long day in the saddle. From familiar Cantonese cuisine to fire-belching Sichuan fare to the hearty laghman noodles of Xinjiang, there’s plenty to choose from as you make your way across this vast country.  It’s a great chance to learn some Chinese, or else do as I did on many an evening and wander into the kitchen of a tiny eatery and start pointing at ingredients.  It will all turn out well, and even with a cold pijiu (beer) or two to wash it down (or to quell the fire in your mouth!), it will still be comfortingly easy on your budget.  Best snack food for the road?  Tiny baozi dumplings; hang a bag of them on your handlebars and nibble as you pedal. 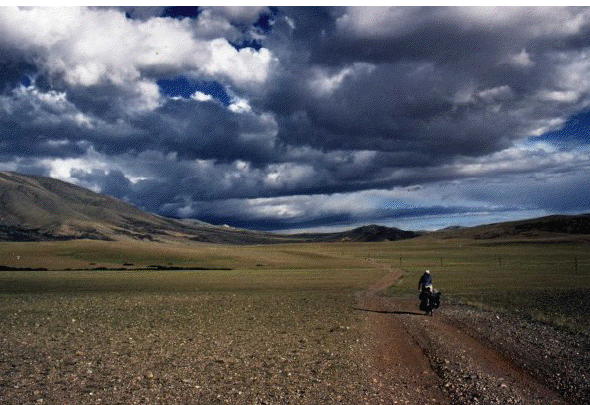 The authorities have done their best to be killjoys and prevent independent bike travel in this most photogenic of places, but if you can swing it, there’s no better place to test your stamina, rearrange your views on the world or take the pictures of a lifetime.  I’ve ridden in Tibet twice:  once to sacred Mt. Kailash from Kashgar, and once from Yunnan to Lhasa and on to Kathmandu.  The unearthly clear high-altitude light, monasteries carved high into cliff faces, epic river fording and massive passes; it’s not an easy trip (disregard the above entry on food in Tibet!!), but it may be the most rewarding place on earth to ride.  Get a long Chinese visa first, enter from China, and keep your ear to the ground about police checkpoints and the like.  With a bicycle, you avoid being dependent on the authorities for transport, which is half the battle.  And good luck!!

China is truly immense, bigger than the continental US, and it has an unbelievable variety of landscapes and cultures to offer.  Sure, the industrial cities of the east may all look the same shade of grey smog, but get out to the centre, the west, the far north, and the wonderful southwest and a world of difference awaits.  Subtropical forests and hill tribes in Yunnan, the deserts of the Gobi and Taklamakan, the picturesque limestone hills of Guizhou, the troglodyte houses carved into the Loess Plateau, the magical Tien Shan, the great gorges of the Salween, Yangtze and Mekong, the forested northeast, Tibet….the list of landscapes and places goes on and on.  And the cultures you’ll encounter:  Muslim Hui and Uighurs, Tibetan Buddhism, the Miao (Hmong) in the south, the Bai and Naxi in western Yunnan, the Mongols in the north.  Who said Chinese culture was Mao suits and red stars? 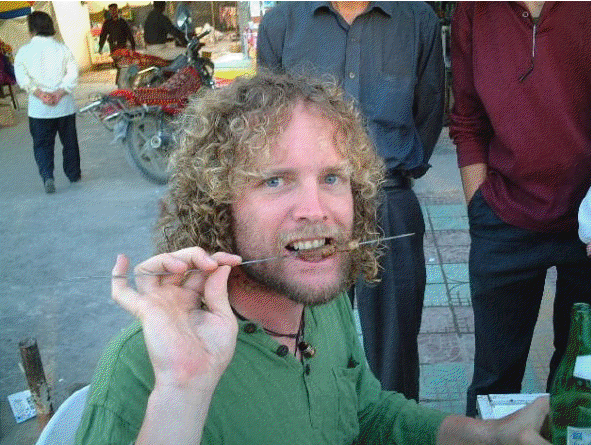 Just when you thought you were coming to grips with your corner of China, you’ll come across something that you completely didn’t expect.  A huge Christian church shimmering in the heat haze in rural Shaanxi.  An ancient cave monastery that doesn’t show up in your guidebook or on your map.  A group of old men playing ancient music in a temple courtyard.  A new reservoir that has swallowed up the road on your map.  Two hundred kilometres of motorway construction sending you on an endless unmapped detour.  Strange and unusual foods on sale in the local market.  A chance encounter with young students eager to practice English.  Or (less common now but still a possibility) getting arrested by the police for infringing some rule that only they know exists.  (Four trips to China, four arrests, but nothing worse than a small fine and a scolding.)

So go on!  Get on your bike and get to China!

About the Author
Graydon Hazenberg fled from a prospective career in astrophysics in 1994 and set off to see the world.  102 countries later, he’s still enthralled by new places and adventures.  He’s biked the Silk Road, Tibet (twice), Ladakh, the Karakoram Highway, Ethiopia, Vietnam, China (four times), Mongolia, the Balkans and now eastern Europe.  When not pedaling, he currently parks his bike in Leysin, Switzerland where he teaches physics at an international school.  Catch up with his travels at  graydonstravels.blogspot.com
Top 5 Reasons to Cycle China

One thought on “Top 5 Reasons to Cycle China”

Touring Talk: the Alaska Highway and Beyond

Touring Talk episode 2: The Alaska Highway all the way up to the Arctic by worldbiking Name: Peer Anselstetter...