We travel because we’re bored with the familiar.  We’re fed up with spotting a Starbucks on every street corner.  We can’t take another day of banal office gossip around the photo copier.  We’re tired of seeing  the same old big box shops springing up in the suburbs.

Finally we make our escape from the known.  A foreign country, fresh faces, different ways of doing things.

In a lot of ways, Argentina’s just like Europe or North America.  They’ve got their McDonald’s fast food joints and Carrefour supermarkets.  Faded jeans, a tight gap t-shirt and a pair of Nikes is pretty normal attire.  People buzz around in Toyota Hilux pick-ups and tiny Renault Clios.

Argentina does, however, have its own way of doing things.  Here are a few odd, unusual, uniquely Argentine customs that pop to mind.

Argentines are absolutely addicted to the stuff.  They all run around totting a mate gourda, sucking this bitter herbal tea through a metal straw known as a bombilla.  At service stations there are special hot water vending machines where, for 1 peso, you can fill up a thermos and make mate on the road.

Mate is the backbone of Argentine sociability.  Just like in Arab countries where there’s an art to making tea, slowing pouring the sweet brew into tiny tulip-shaped glasses, the Argentines  make a ceremony out of drinking mate.

Only in Argentina cups are for sissies and everybody passes around the gourda mate and sucks out of the same metal straw.

Yuck, you’re thinking, totally unhygienic.   Sharing straws with strangers.  Surprisingly, you get used to it.

Gauchito.  Throughout the country you’ll find small roadside shrines dedicated to this uniquely Argentine folk saint, Gauchito Gil.  At each shrine, cheerful red flags flap in the wind and offerings are scattered about.

Argentines believe Gauchito has the power to heal, but this saint expects something for his efforts.  Motorists leave bottles of whiskey, cigarettes, sweets, and even money.  Once we even found an old pair of shoes that had been offered to up at a Gauchito shrine.

Seems odd at first, but who’s to judge?  Americans toss millions of coins down wishing wells, also hoping for miracles. 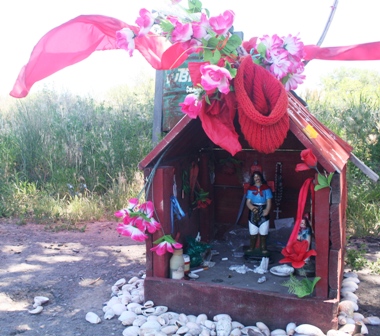 Siestas.  In most parts of the world, siestas have fallen out of fashion.  In our time is money culture, who can afford to slice off part of the day for a leisurely nap?  Argentines.  That’s who.

You will be hard-pressed to find anything moving on main street between the hours of 1PM and 5PM in most of small town Argentina.  Shops, office and even supermarkets are locked up tight and everybody’s at home snuggled up in bed frittering away the afternoon.  Great for sleepy Argentines, less so for hungry cyclists.

Yes, there may be a lot of cultural homogeneity, but Argentina is unique.  Just like every other country on the planet.  That’s why travel–with all its inconvenience and uncertainty–is worth the effort.

Why travel? Gauchito and other Argentine oddities

6 thoughts on “Why travel? Gauchito and other Argentine oddities”

The serendipity of cycling

Wonderful things happen when we open ourselves up to serendipity and chance.  Embracing the out-of-the-ordinary often lands us is the...