After the austere beauty of the Tibetan Plateau, we thought the rest of China might turn into a big disappointment.   Not in the least.

How to enjoy cycling ANYWHERE!

Alright, the first few days out of Chengdu were a blur of smoke belching factories and a succession of grubby provincial towns filled with locals hacking and spitting as they went about their business. Even the rural areas lacked charm.   The countryside was mostly a foul smelling place of putrid pigsties and reeking public outhouses catering to the peasants working the fields.  Each day we were subjected to perhaps a thousand deafening horns as vehicles lumbered past.  They clouds hung heavy and the sun barely shone and we both started slipping into a vague depressive state.  But what could we do?  Hop on a bus?  No way!  Here’s what we did:

We held our breath a lot.  We listened to podcasts. We obsessed about our next meal.

It always gets better

And then, quite unexpectedly, it all changed.  The world was beautiful again.  We were pedaling alongside a narrow gorge on a minor road with minimal traffic. The trees were turning a lovely rust, bright orange and deep scarlet. We passed by the villages of the Yi people, one of China’s many fascinating minority groups.  Most women still sport their traditional dress and headgear and life appears not to have quite caught up with the modern era.

Bill Weir of Crazy Guy on a Bike fame had biked here back in 2008 and we were following his route, more or less.  The astonished looks and crowds we drew made us wonder whether any other foreigners had been through since Bill.  In one town the police escorted us right up to our hotel room and then drove us down to the station.  All the officers gathered round to check out the passports.  After spending some time pondering the pages and chattering excitedly, they finally asked where we were from.  Obviously foreign languages are not a high priority in the Chinese education system.

I’ll let the images tell the rest of the story… 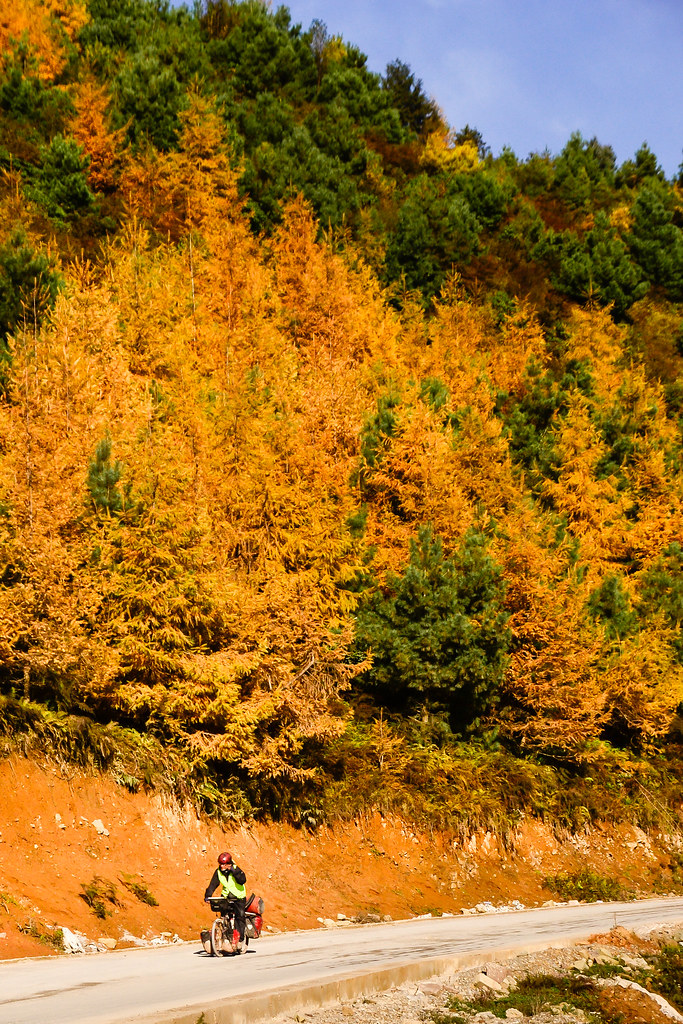 For detailed info on the route, check out Bill Weir’s Crazy Guy on a Bike Journal.

Many thanks to Jonathan, Annie and their family for hosting us in Kunming–best place for rest and relaxation in all of China!  We are very grateful for all your help and wonderful hospitality.

The Yi and the Yangtze

7 thoughts on “The Yi and the Yangtze”