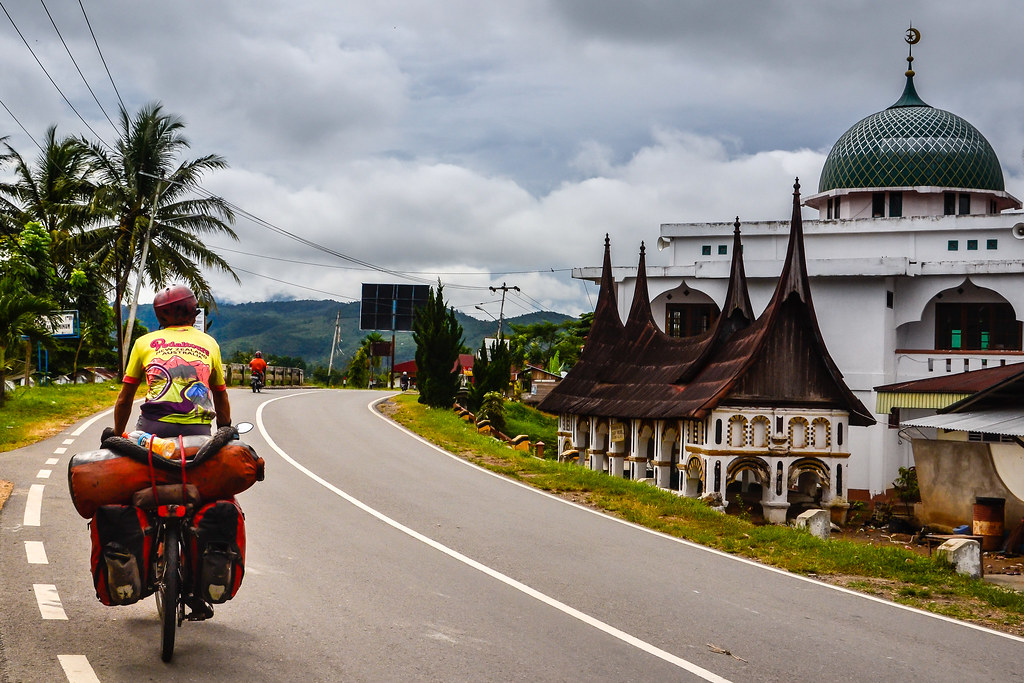 Almost six months ago we rolled off the Pelni from Malaysia and set out to circumnavigate Sulawesi. We survived that (but just barely) and went on to bike the length of Java (which turned out to be much better than expected).

After my whirlwind trip to Montana and Eric’s stay in Jakarta, we rambled on to Sumatra.

Our expectations were high. This was mostly fuelled by stunning images from Mark Watson. Through Mark’s eyes, Sumatra appeared romantic and remote…a place of twisting mountain roads and ramshackle villages.

I wouldn’t go so far as to say Sumatra has been a major disappointment. Maybe just a little bit of a letdown. I rack this up to a couple of things: our route and Ramadhan. Clearly the best cycling is through the mountains on the least frequented roads. We sealed our fate one sweltering afternoon in the junction town of Tapan. Weary of the tropical heat and more than a few monumental hills, we wimped out and took the easy option: a relatively flat stretch of coastal road.

Do we have regrets? YES. Of course, I say that as I sit in air-conditioned luxury at the comfortable home of a couchsurfer. Had we actually done the climb up to 1,800 meters, I might now think otherwise.

And then there’s the challenge of keeping your belly full during Ramadhan. Sumatra’s sizeable Christian population is focused in the far north, and we’ve yet to see a single church on the island. EVERYONE seems to be fasting. You’re not even supposed to drink water—I was once chastised when caught doing so.

Luckily, we’ve stumbled across a few restaurant owners who are willing to let things slide for foreigners. As long as the curtains are drawn, hidden from prying eyes, we can tuck into a Nasi Goreng.

Sleep is another concern. Normally, the five daily calls to prayer are hardly an intrusion. I actually enjoy the ritual of waking up at 4:45 to the sound of the muezzin. Ramadhan is another story. In some small villages, prayers and sermons are blasted out of loud speakers nearly all night long! Once, the only reprieve came between midnight and 2 AM.

As you can surely imagine, cycle touring on just two hours of sleep is about as fun as riding into a Patagonian headwind. This is our second time cycling Indonesia during Ramadhan and– trust me– we won’t make the same mistake a third time.

Dumai and the ferry to the Malaysian city of Melaka lie just 200 kilometers to the northeast. I guess it’s time for an Indonesia wrap-up.

The locals. No doubt about it, Indonesians are some of the friendliest folks on earth. When you’re really at the end of your rope, somebody will pull over and offer you a cold drink, show up with a plate of fruit at the door of the school where you’re staying  or insist on helping you push your bike up one of Sulawesi’s killer hills.

Something for Everybody. Indonesia may straddle the equator, but it’s got much more to offer than tropical rainforests and picture-perfect beaches. Being a country dominated by volcanoes means there are plenty of mountains to cool off in and test your fortitude and endurance.

Sleep Easy. You’ll never really have to fret over finding a place to sleep in Indonesia. The local school is always our first stop for accommodation. We love being able to roll in the bikes and spread out all our stuff. Churches, fire stations, health centers (Puskesmas) and friendly families are also excellent options. But don’t worry, if hotels are more your style, you’ll find plenty of those, too.

Sudah Mandi? “Have you bathed yet?” is regular small talk in Indonesia. Most locals bathe at least three times daily and are shocked by dirty foreigners who just wash up at the end of the day. In such a hot and sweaty climate there’s nothing better than getting the grime off.

Places to bathe are plentiful. You can shower at the Pertamina gas station, after lunch at the tiny roadside restaurant or even by the side of the road at strategically placed outdoor showers.

Better yet, you can join the locals for a communal bath in the river. Just be sure to take along your sarong.

Searching for solitude in Indonesia is like trying to find a restaurant open for lunch during Ramadan in Aceh (Indonesia’s most conservative province and a place where Sharia law is in effect). It’s futile.

What’s more, Indonesians love to cruise around on their scooters. Bands of young people race around town and think nothing of chasing down foreigners in hope of nabbing a photo together (which will quickly make its way to Facebook).

My mouth is on fire. Much Indonesian food (particularly Padang style) is doused with chilies. Reaching for water only spreads the fire. With bulging eyes, profuse sweating and a smattering of curses, Eric was able to manage the peppery concoctions. I, on the other hand, had to stick to fried rice with explicit Tidak Pedas instructions (not spicy) for most of my meals.

Cigarette Nation. If, like me, you find cigarettes repulsive and exposure to second hand smoke cause for mild outrage, get ready to be annoyed in Indonesia. It seems almost every man and boy over the age of 13 has got a cigarette dangling from his lips. There’s really no sense in getting riled up because everybody’s doing it.

Sauna Cycling. Let’s face it, oppressive heat brings out the surly and sluggish side in all of us. Sea breezes help to cool things off.  But only in the highlands will you really come across ideal cycling conditions.

Travel is supposed to be all about embracing other customs and traditions. But some aspects of Indonesian culture continue to baffle and bewilder me.

Shine a light on me. Based on our own highly unscientific study, 98% of all Indonesians sleep with the lights on. I’ve come across people in peaceful slumber directly underneath bright fluorescent lights. Indonesian homes and buildings all have an open ventilation space above the doorway so you know when the lights are on. Locals actually become concerned when we turn the lights off to sleep. Often someone bursts through the door and flips the switch, flooding the room in light.

They’ll listen patiently and nod in agreement as you explain that you like to sleep in darkness. But deep down you know they think you’re just really, really weird.

The wind has entered my body. Masuk Angin. When Indonesians feel slightly unwell, they blame it on Masuk Angin. The idea is that exposure to a draft and has made them sick.

Why does that matter? Well, first off in means that most villagers don’t use fans. It’s not that they can’t afford one (after all, they’ve all got mobile phones and motorbikes). The air stirred up by the fan, they believe, will surely cause masuk angin.

Having that ‘meaningful cultural exchange’ at the home of the village chief will undoubtedly entail sitting around sweating and swatting mosquitoes all night long.

We love you, Bule! Indonesians seems to truly have affection for foreigners (or bule as we’re known–which literally translates into ‘albino’). Or maybe it’s just bule on bicycles that they like so much. We’re dirty and smelly and often a tad grumpy at the end of a long day. In spite of this, we’re welcomed warmly wherever we go. This is the most baffling of all.

The Good, the Bad and the Downright Baffling

4 thoughts on “The Good, the Bad and the Downright Baffling”

A little to the left, a slight move to the right, a minor change of saddle angle…nothing stopped the bolts...