“What?  You’ve lost your passport?” I shout, mouth gaping in disbelief.

The year was off to a highly inauspicious start.  It wasn’t even noon on January 1st 2012 and we’d already witnessed a serious accident involving a semi and a now very compact car plus a minor crash between a car and a motorbike.

China’s Highway 209 heading south towards Vietnam was turning into two narrow lanes of terror.  Trucks overloaded with sugar cane rumbled along while motorbikes and scooters raced by, weaving in and out dangerously.  Impatient drivers of Hondas and Fords attempted to overtake slower moving vehicles on blind curves and hills, apparently oblivious to the risks.  The traffic pumped past in a steady stream and we rode in a state of high alert, ready for a villager guiding a water buffalo  to dart out into the road or a reckless driver passing on the right to come careening head on into our path.

It was hard to square these tense road conditions with the beauty and tranquility of our rides—just a few days back—around Yangshuo.

Yangshuo is China’s number one backpacker tourist spot.  The striking karst landscapes of the region are renowned throughout China. The surrounding countryside is filled with narrow tracks and riverside trails making it a veritable paradise for cycling.  The limestone peaks, farming villages and the gently flowing Yulong River make for almost perfect riding. 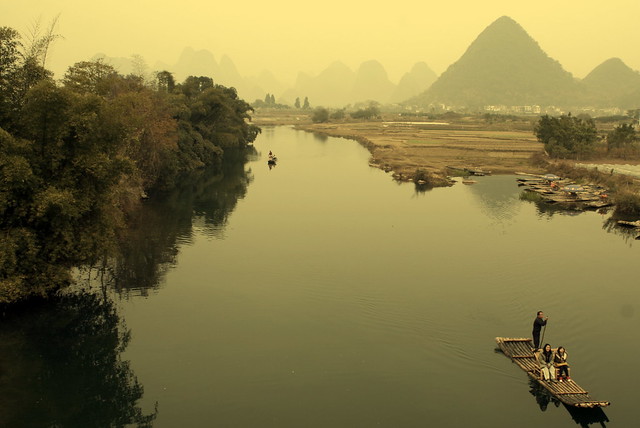 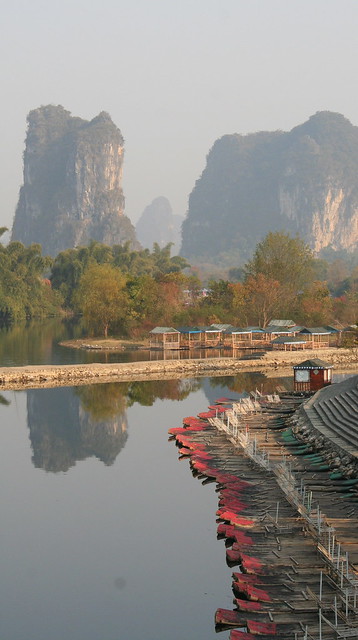 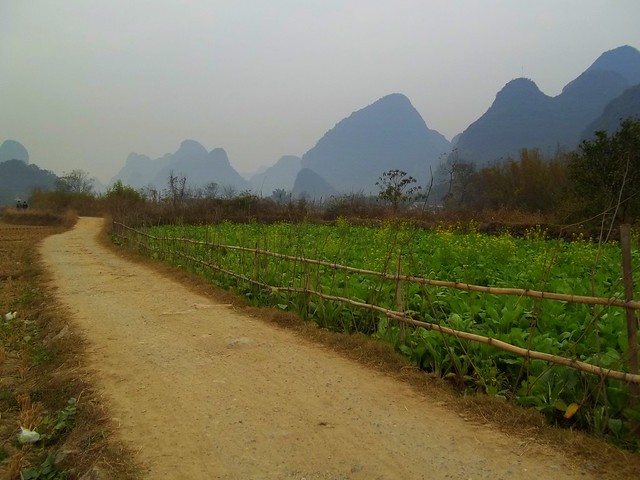 The exact opposite of the hellish conditions facing us  New Year’s Day on Highway 209.

And to top that off, Eric can’t find his passport.

This is serious.  No passport means we’re stuck in China.  Would he have to bus it to the French Embassy in Beijing to get a new one?  How could he get out of China and into neighboring Vietnam without a passport?  And what about me?   My visa was expiring in less than a week’s time.  Would I have to cycle solo on to Vietnam?  China didn’t seem like a country to get tangled up with the authorities by chancing an overstay

“Hmmn..,” Eric muses, rifling through his bags.  “I must have left it at the hotel two days back.”

Things are looking up.

“Yeah, that must be it.  I remember giving it to the desk clerk so she could register us.”

In theory, foreigners are supposed to register with the police each time they check into a hotel.  In practice, most hotels (at least the cheap ones we check into) ignore this rule.  Probably because they don’t want to pay taxes or risk their own encounters with authorities.

The hotel staff in the town of Hung Mao were an exception.  The lady behind the desk was a stickler for rules and she wanted to copy down all the passport details and register us in proper bureaucratic fashion.  Hence the forgotten passport.

That was two days back.

Now it was time to gear up into crisis mode.  Tracking down the missing passport would be our first challenge of the new year.

We raced back to the last town we’d passed, checked into a hotel (no passport required as was the usual case), and Eric set off to catch a bus back to Hung Mao in search of his passport.

For the first time in almost six years on the road, I truly regretted not having a mobile phone.  Eric had promised to return before dark, but would if he didn’t?

The entire day I sit stewing in the hotel room.  Had there been an accident?   Maybe there’d been a squabble with the police and they’d put Eric behind bars.  Perhaps he’d hitchhiked (although I made him promise he wouldn’t) and some psychopath had picked him up.

6 PM and night falls without Eric’s return.  Now 7:00 and still no Eric.  Should I go to the police? Communicating the problem would certainly be complicated.

Maybe try to find an internet café and see if Eric has left a message.  Even that would pose problems since the authorities introduced a new regulation requiring users to present a Chinese-issued ID or residence card before using public internet.  The latest step in the Communist party’s quest to crackdown on organized opposition.  Maybe I could convince somebody to let me use the internet even though I couldn’t provide the proper documents.

Nothing was ever easy in China.

Where, oh where could he possibly be

Now it was 8 PM and I was seriously worried.  Hung Mao was less than 150 kilometers away.  Surely it couldn’t take so long to get there, track down the passport and return.  Damn, if only we each had a mobile phone.

At 8:30 there’s a knock at the door.  I open up.  The front desk girl is pantomiming a telephone call.

I race to the lobby, thankful, we’d had the foresight to note the hotel’s phone number.

Eric is on the line.

“I’m at the police station.”

“But what are you doing at the police station?”

“It’s a long story.  But basically there aren’t any more buses tonight.  I’ll spend the night here and see you in the morning.”

My husband’s spending the night at a Chinese jail.  And I’m relieved.

Honey I think I lost my passport: an inauspicious start to 2012

13 thoughts on “Honey I think I lost my passport: an inauspicious start to 2012”

A Chris Guillebeau inspired review of 2011. What went well in 2011: We slowed our pace of travel. I’ve suffered...