Some of the best wild camping in the world. Pitch your tent on the banks of a fast-flowing river, on the shores of an Andean lake or high up on a mountain top and drift off to sleep in perfect peace.  Even if you’re one of those cyclists who usually prefers a hot shower and a soft bed, don’t miss out on a night under the stars in Patagonia.

First world comforts on a third world continent. If you’d like to explore South America but are apprehensive about squat toilets, dodgy sanitation and hit and miss security, Argentina is the perfect country for you.  This is the land of well-stocked supermarkets, spotless public toilets, friendly tourist information offices, honest officials, efficient border crossings and chain stores…just like the ones on main street back home.  Coming down with a case of culture shock in Argentina is about as likely as picking up malaria in Alaska.  Argentina is a great place for a first-time bicycle adventure abroad.

The people. Argentines really seem to love foreign tourists, especially those on bicycles.  Although all the honking, waving and picture taking can become tiresome, you can’t help but feel good when a car full of cheering fans roars by as you tackle a tough climb.

Spectacular and diverse landscapes. From the lush semi-tropical forests of the far north to the vast steepes of Tierra del Fuego in the extreme south, Argentina is about as varied as any country on earth. There are the Andes for mountain lovers, the pampa for those who prefer riding on the flats, the windy undulating hills of Missiones Province for those that want a little taste of the jungle and if it’s desert-like scenery you’re after, try a ride around Salta in the far north. 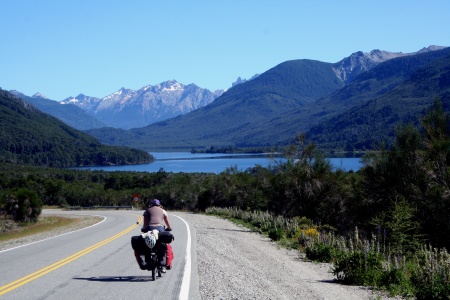 3 thoughts on “A-Z of Bicycle Touring: 5 reasons to go bicycle touring in Argentina”

Why 2011 is the perfect time to go bicycle touring

Time is running out.  We all have a tendency to put off living our dreams. First we’ve got to get...