Our time in Cambodia was largely spent conforming to the norms of how a Southeast Asian tourist spends her time:

At Siem Reap, we wandered around the ancient temples and fought the crowds at Angkor Wat.

In Phnom Penh, we admired the luxurious Royal Palace and strolled around serene Wat Phnom. 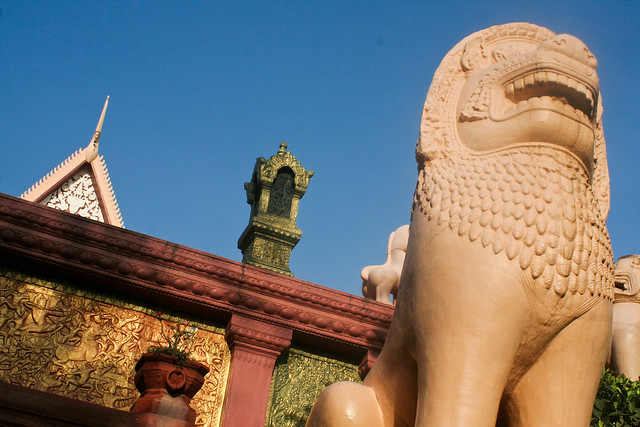 Each morning, I rolled out of bed at dawn to saunter through the so-called Russian Market (an out-dated moniker which came about in the1980’s when masses of Russians shopped there) and watch it come alive with vendors hawking everything from used clothing straight from the Salvation Army to carvings, curios and Chinese silks.   Naturally, after a nice stroll my stomach began growling which was an adequate excuse to treat myself to a refreshing iced-coffee and some sugary Cambodian-style donuts. 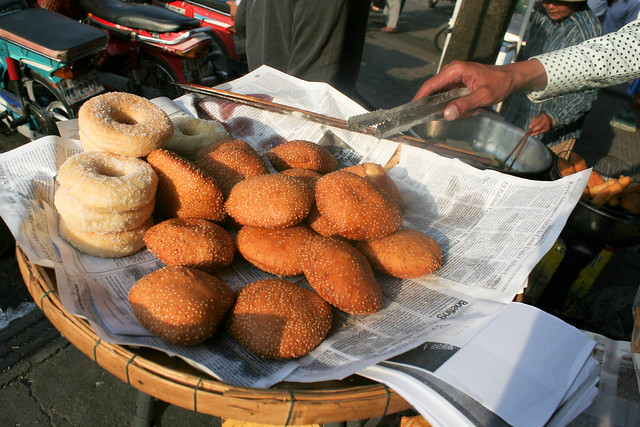 One oppressively hot afternoon I even dropped in at the macabre and depressing Tuol Sleng Genocide Museum and immersed myself for a few hours in the crimes of Pol Pot’s evil regime.

One of the crowd

We were model tourists in Cambodia.  We did everything the guide book told us to do.

Which was very good and fine, if not particularly earth-shatteringly interesting or in any way unique.

Thousands of foreign visitors come to Cambodia to ooh and awe at Angkor Wat and the Royal Palace.

Tons of tourists sit through the identical spiel at the museum.

And scores of backpackers haggle over prices at the Russian market.

But not everybody turns up in random villages to spend the night.  Few visitors know the joy of pedaling along with a group of school kids as they head off for a day of learning.  And how many tourists refresh themselves at the end of a hard day’s ride with a dip in the local swimming hole?

It was time to hit the road and discover the hidden side of Cambodia.

From Phnom Penh we battled our way south against traffic and a mild headwind.    Since Patagonia, I rarely find myself grumbling about wind in my face, knowing full well what REAL wind is all about.  Still, we had perfectly flat roads for the first time in a very long time and I wanted to FLY.  Instead we were putzing along at 16 kilometers an hour.

Late afternoon, at the peak of the heat, two young guys on a scooter pull up alongside me.  This is not unusual.  All over the developing world, curious locals pull up for a chat and a closer look at our mysterious machines.

The driver turns to me, and with a straight face says, “Madam, I think you are very hot!”

Of course, I can’t help but to burst out laughing, even though I know he’s referring to the effects of the scorching sun and not the fit of my cycling shorts.

I’m still smiling as the sun slides behind the horizon and we pull off the road to seek shelter at a temple.

Why camp in Southeast Asia?

While it’s usually not a problem to find a guesthouse in Southeast Asia, I enjoy the flexibility of camping.  We can take a few hours off during the mid-day heat and then cycle in the relative cool up till sunset without worrying about finding accommodation.

Along busy roads, temples are found every 10-20 kilometers and it seems cyclists with a tent are always welcome.

That evening’s temple was rather scruffy, home to just a handful of aging monks who spoke no English.  In spite of the language barrier, we were shown a bamboo platform on which to pitch the tent and directed to a small reservoir in which to bathe.

Bathing in public while remaining fully clothed is a bit tricky and I regretted not having a sarong along for that purpose.  A few children gathered to watch and I did my best to pay them no heed.  Still, I could feel their prying eyes, particularly when I set about shaving my legs and underarms.

Refreshed from my bath, we set about preparing the evening meal.  As usual, the multi-fuel stove was of great interest and the monks and a small crowd of local men watched intently as Eric fired it up.

Later a gaggle of school kids (still in uniform) showed up and one bold girl set about with an inquisition.

“I have several questions for you,” she began.  “First, why have you come to sleep in our village and where are you from?”

Her English was surprisingly advanced and when I asked her if she was top in her class, there was not a moment’s hesitation before she answered with pride, “Yes, I am number one student in English.”

Finally the questions wound down, everyone headed home and we drifted off to the most peaceful night’s sleep I’d known in months.  The village was blissfully silent and, not yet hooked up to the electrical grid, the only light that invaded the tent was that from the stars.

Cambodia, it turns out, is not entirely flat.

At least not in Botum Sakor National Park where the terrain undulates, rises and falls through the thick tropical forest.  This beautiful and remote part of Cambodia, shoved up next to the Cardamom Mountains is also home to a diminishing number of Asian elephants. 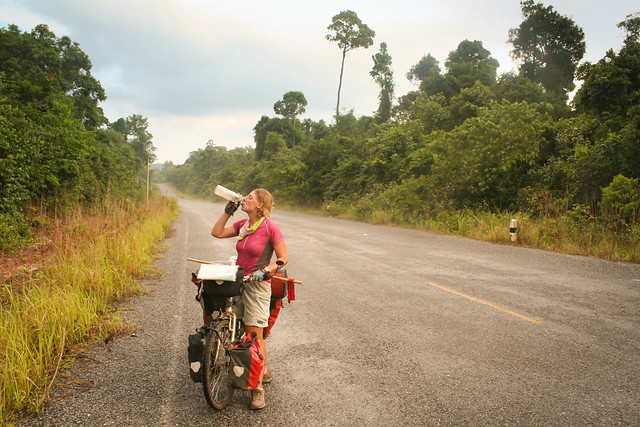 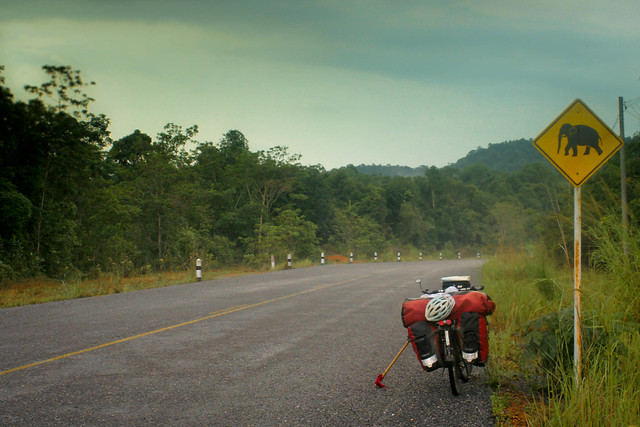 We didn’t spot any, which is good on the one hand, since elephant encounters can indeed go wrong, but disappointing, too since we hadn’t had any real wildlife encounters since multiple meetings with bears back in Canada.

Not many wildlife encounters in these parts, but plenty of encounters with two-wheeled animals.

We crossed paths with La La and Tom, an Australian-English couple new to cycle touring,just as we were scouting  around for the temple in the village of Trapeung Rung.

La La and Tom were new to temple camping, but we quickly indoctrinated them in the joys of pitching up amongst  the monks.

We chatted late into the evening (almost 11 PM–usually I’m out around 9:00) and in the morning still had more to discuss.

There’s often an instant understanding between cyclists–kindred spirits of the road that we are–which makes these random meetings so meaningful.

Alas, La La and Tom were headed in the opposite direction, to Central Asia perhaps, they’re not quite sure.  What they are certain of is that two-wheeled travel will occupy their lives for the next coming years.

A few days later, after we’d crossed the border back into Thailand and were pedaling furiously towards Bangkok, I spotted a couple pedaling ahead.

Not quite as eloquent as Stanley’s, “Doctor Livingstone, I presume?” but I was taken aback.

Turns out we’d run into Julian Bloomer and his new cycling partner Ellie.

Wonderful!  I’d first been in contact with Julian as Eric and I were cycling through Africa way back in 2007.  Julian set off on his own ride through West Africa in July 2008, which eventually snowballed into a world tour (does this story sound familiar?  It could happen to you!).

I dare say we didn’t make a particularly positive impression on Julian and Ellie, given that we were experiencing a rash of mechanical issues that left us bickering and bad-tempered.

In the end it was Ellie who rescued us, after our final “spare tire” blew out completely and couldn’t be resuscitated even with the help of a boot.  Ellie kindly lent me her spare and I wobbled into Bangkok without further problem. 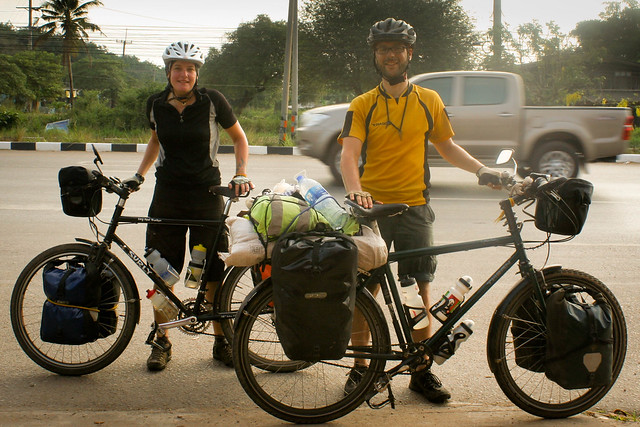 Wild dogs and a madman

Our final evening before reaching Bangkok was spent not in the company of Julian and Ellie (whom we’d lost track of on the busy road near Chonburi) but with 44 feral dogs and a madman.

Temple camping means you never quite know where you’ll end up, and this time it was at a Wat specializing in stray dog outreach.

The kindly monks spent their days sweeping up dog do-do and attempting to keep the noisy hounds quiet and maintain a semblance of control.

There were no cages and it was every dog for himself at the feeding trough.  The madman was just as territorial as the dogs and his grimace made it all too clear that he didn’t take kindly to having to share his camping space with the strange farang on bicycles.

Using the toilet was tricky since not only did movement set the dogs off into fits of prolonged howling, but it also set off our campmate who began frantically sweeping  behind us where our path had sullied the earth.

It was no wonder then that biking into Bangkok proved so stressful, given the fitful slumber of the previous night.

The heat combined with the traffic and pollution of a city of 10 million was a lot to handle.

Urban sprawl begins around 80 kilometers from the city center so it was a full day of breathing in noxious fumes while dodging cars, buses and motorbikes.

My mood was lifted around 2 PM when we stopped for a rest at one of the many markets.  That’s one thing about Thailand, you’re never far from food…delicious and cheap food, to boot.

As we were gorging ourselves on some fresh deep-fried cod, one of the vendors popped by and offered us two ice-cold bottles of coke.  It was a simple gesture, but my face lit up with joy brought on by this unexpected kindness.

After that, the traffic didn’t feel so aggressive, nor the heat so searing and I even managed a smile or two.

All thanks to that random encounter of the very best kind.

3 thoughts on “Random Encounters of the Very Best Kind”

This may come as a surprise, but for many long-distance cyclists Iran tops the list of favorite destinations. Friedel and...