Your very first visit to a Third World country leaves a big impression.  It’s inevitable.  A few strong images stick in your mind long after you’ve settled back into your comfortable First World existence.. 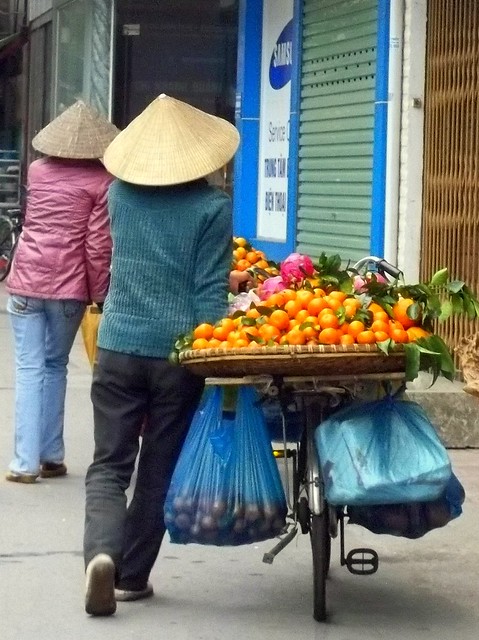 Maybe it’s the “dirt poor locals” who appeared so joyful and content.  Or the wide smiles of the hotel staff.  Perhaps the crowded streets teeming with humanity .

Or maybe it’s the the overpowering stench of raw sewage, the grubby kids, and the hustlers and scammers that come to mind.

One thing is sure.  You never forget the jolt that accompanies the transition from First World to Third.

Vietnam was the country of initiation for me.  Way back in the mid-90s, when you could actually use the terms First World and Third World without being  branded  a politically incorrect clod.

My strongest memory of that first developing world travel experience is standing transfixed on the streets of Saigon wondering how on earth I could ever cross to the other side.  Even then, traffic was a non-stop succession of scooters. There was no Walk sign or green light to act as my guide.

I watched in wonder as the locals weaved in and out of the traffic, making it safely to the other side.  It looked effortless.    They just glided between cars and buses and carts.

I thought my chances of mimicking this were slim.  Most likely I’d freeze up like a deer caught in the headlights of an oncoming vehicle and be flattened by the first bus that came roaring my way.

This wasn’t going to be much of a holiday if I just holed up in my hotel for two weeks until I called a taxi to whisk me back to the airport for my return flight.

Finally, I screwed up the courage to step off the sidewalk.  I stuck close to a pack of office workers sauntering across the busy thoroughfare, and what do you know?  I made it!

Ever since I’ve been smitten by the travel bug.

A lot has changed in the 15 years that have passed since my first Asia experience.

Not only can I now traverse congested Vietnamese roads with complete confidence, I can even bike  them.

In fact biking Vietnam’s not so bad.  Or at least it seems that way compared with the crazy conditions on Chinese roads.

First off, Vietnamese is written in a Roman script.  That means we’re no longer locked out of the world of words.  We can actually decipher the signs.

The first word I learned, in Mong Cai where we crossed over from China, was Nha Nghi.  That’s hotel in Vietnamese.

What a difference this one little word has made in our lives.  No longer are we subjected to the evening ritual of accosting copious numbers of passersby and pantomiming sleep in order to find accommodation.  We simply search out the signs.  Nha Nghi: the most useful word in the entire Vietnamese language.

Secondly, the Vietnamese are assertive.  Actually, Vietnamese who have little to do with foreign tourists are assertive.  Those exposed to foreigners quickly become infected with the aggression bug which has lead to Vietnam’s (well-deserved) reputation as the hassle capital of Asia.

When contact with foreigners is minimal, Vietnamese are assertive.  And that’s a good thing.   Locals earnestly attempt to understand foreigners.  Unlike the Chinese, who sometimes act like foreign visitors are invisible, Vietnamese don’t shy away from contact with tourists.

If you’re trying to order lunch but are baffled by the Vietnamese menu, no problem.  Expect the proprietor to grab you by the arm and escort you into the kitchen to choose your meal.

Want to buy some dragon fruit from an old lady in the market?  You don’t speak a word of her language, and she understands nothing of yours. No problem.

She’ll whip out her calculator and punch in the price or shove a wad of bills in your face to get the point across about how much you owe.

The Vietnamese know how to get things done.  I like that. 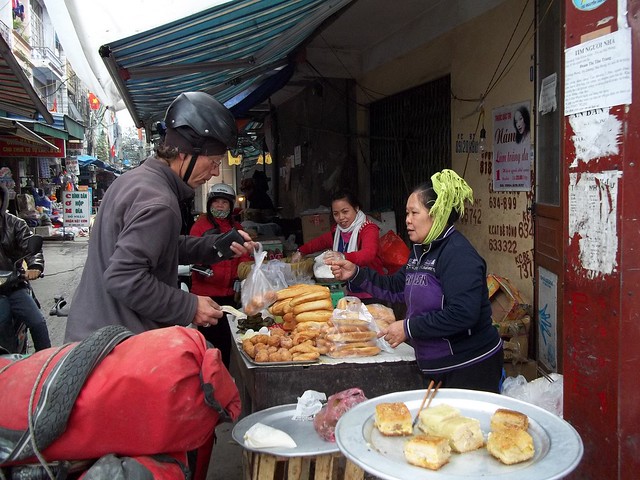 Finally, Vietnam has yet to experience a Chinese-style   bonanza of road building.  You want to go south?  You got one choice.  Take Highway 18.  Easy.

We followed 18 South through the usual succession of dreary towns and farming villages.  If you think Vietnam is a country dotted with picturesque villages of thatch-roof huts where everybody rides a bicycle and spends their days slaving away in the rice paddies, you’re way out of date.

The industrious Vietnamese have moved on to concrete brick homes, factory jobs and scooters.

Ah the unassuming scooter—the bane of a cyclist’s existence in Southeast Asia.  Progress in Vietnam has come at the price of peace.  All day long we are subjected to the incessant squawking of these cute contraptions.  Beep, beep…beep, beep… beep beeeep, a constant din fills the air.

Cat Ba island promises to be a reprieve from all the clatter.  Eric has been selling me on the place for weeks.  When my whining kicks in (The traffic!  The noise!  The confusion!), he paints me a picture of a quiet island plopped down in Halong Bay  where I can enjoy views of the limestone peaks in the distance.

Cat Ba has undergone a change or two since Eric first visited in 1996.  The two family-owned guest houses that he recalls have mushroomed into hundreds of hotels.  HUNDREDS.

It’s the off season so we have our pick.  Six dollars a night gets us a view of the bay, clean sheets, a hot shower and WiFi.  The place is mostly deserted except for a few hardy backpackers.  Thankfully, because I doubt I’d stick around when Cat Ba is in full swing, full of boisterous Chinese tourists frequenting the massage parlours.

A couple of days rest and relaxation and we catch the ferry back to the mainland.   Cat Ba is no longer the tranquil oasis of Eric’s recollections, and he’s ready to move on. 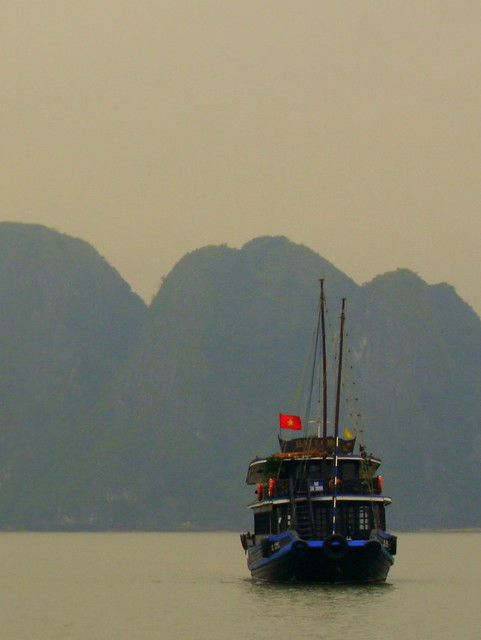 Back to the  Grind

Unsurprisingly, the traffic on the highway to Hanoi buzzes by at a frenetic speed.  A wide shoulder makes cycling slightly less dangerous, but we’ve constantly got to be on the lookout for scooters coming at us from all directions.  In Vietnam the usual rules of the road are, well, more like recommendations or tips, best driving practices if you will, but hardly laws to be meticulously obeyed.

Why doesn’t everybody ride a bicycle? The roads would be so much safer and pleasant. 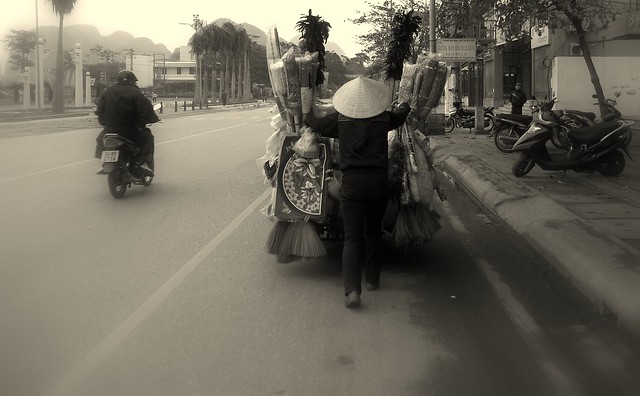 In Hanoi, we settle into the home of Karen, our latest host from Warm Showers.  We’re sequestered in an expat ghetto, where foreigners outnumber the locals.  There’s an authentic French boulangerie just down the road, three wine shops within walking distance and a couple of grocery stores chock-full of imported goods.

Laos is just a short ride away, and this may well be my last impression from Vietnam.  It certainly has little in common with my first impression on that sidewalk in Saigon, way back in the 90s.  That’s progress, I guess. 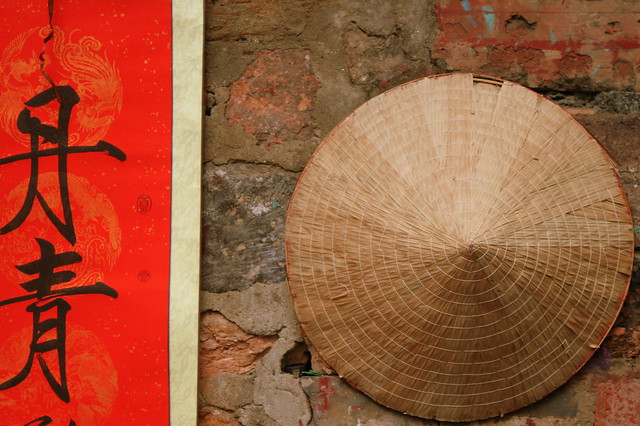 Check out more of our Vietnam Photos on Flickr

Let us know what you’re thinking in the comments section below.

You can get in touch at worldbiking@gmail.com

Then and Now: Vietnam Revisited

6 thoughts on “Then and Now: Vietnam Revisited”

A Practical Guide to Bicycle Touring in Taiwan

[tab:Intro] Taiwan was recently ranked by Lonely Planet as one of the top destinations to discover in 2012.  We couldn't...